FSL Softball - A Season in Review

PHILADELPHIA – It’s been a competitive spring in the Friends School League. While a familiar face tops league standings, anything can happen in the playoffs.

In the Franklin Division, Shipley School is the obvious favorite entering today’s FSL semifinals. The Gators have gone undefeated in league play, garnering a 10-0 FSL record. Most recently, Shipley ended the regular season with a 10-0 victory against Friends Select. Junior Cassandra Farrell hit a grand slam in addition to a 3-run home run, accounting for seven RBIs in the Gators end-of-season clash.

In the Penn Division Westtown boasts an impressive 7-3 FSL record, with one loss coming at the hands of Shipley 8-0, another was a close 7-6 extra-inning bout with Friends Central and the last was another tight 3-1 loss against Friends Select on May 5.

Shipley and Westtown met in regular season play last Monday. The Gator’s bats were on fire and senior Morgan Kane, who has committed to play for Holy Cross next season, led the offense with a triple en route to an 8-0 victory. Farrell and fellow junior Maddie Todd also had two doubles in the outing and Maddie Ewald added a double of her own.

Friends Central, who ended the regular season as second seed in the Franklin Division with a 7-3 record, will travel to Westtown today to battle the Moose for a trip to the FSL championship game on Friday. Friends Select, the third seed in the Franklin Division who finished the FSL season 6-4, will be faced with the daunting task of playing Shipley at the Gators home field this afternoon in the FSL semifinals.

As we prepare for the championship on Friday, let’s reflect on a few of the highlight games this past season:

Friends Select opened FSL Play with a convincing win against a shorthanded Academy of New Church:

This was the FSL opener at the beginning of April and the Falcon’s came out swinging. Academy of the New Church (4-6 FSL) took on rival Friends Select and fell 16-4. ANC was already at a couple of disadvantages taking on the 2019 FSL champs, as several of their players were still away on spring break, leaving the team with a handful of underclassmen managing the field. Freshman pitcher Jamie Madara said the Lions made a few mistakes that would be quick clean-ups as the season progressed.

“Better communication, better bonding, and more team chemistry will help us on the field,” said Madara. “We missed some plays that were easy, but it was just bad communication and that’s just going to get better as the season goes on.”

While the work ethic and effort from ANC was apparent, the bats of Friends Select were too hot to handle. Not only did Friends Select take command at the plate, but their base running was more aggressive and their fielding was more coordinated. The Falcons took advantage of wild pitches and in-field errors to grab stolen bases.

Despite the lopsided score, the game was fairly even for most of the contest until the fifth inning. Friends Select took advantage of the youthful ANC team with clear and constant communication on a windy early spring afternoon.

“We started off strong. And I think playing well kept our attitudes up which was able to help us ignore the weather and play through it,” said Friends Select senior, Margot Schneider.

Friends Select was able to notice the weak spots in their opponent, while ANC was more focused on trying to play together as a team—which, to their credit, is an incredibly difficult thing to do against a perennial FSL contender.

Shipley Wins For a Greater Cause:

Shipley hosted Abington Friends on a brisk Thursday afternoon, where they defeated the Kangaroos by a score of 11-1. Abington Friends did not secure a hit until the 5th inning and struggled to get the bats going early.

“I wanted to keep the shutout, but they (AFS) ended up scoring a run later, which I wasn’t happy about, but we still got the win. I felt like I pitched really well for most of the game,” said Todd.

The Gator’s bats were on fire in the sixth, where the lineup batted around and scored six more runs, which tallied up to a final score of 11-1.

Shipley played the game in honor of Pediatric Cancer, in which the Gators had a team goal of raising $500, but ended up raising over $1,900. Todd noted that gave the team extra motivation heading into the game.

“Raising money for Pediatric Cancer is really important to our team and we were happy we raised so much money for the cause and definitely wanted to get a win today, and that gave us more motivation to play well,” said Todd.

Earlier in the season….

Maddie Ewald recorded a key line-drive in the sixth inning to seal an early season victory for the Gators. 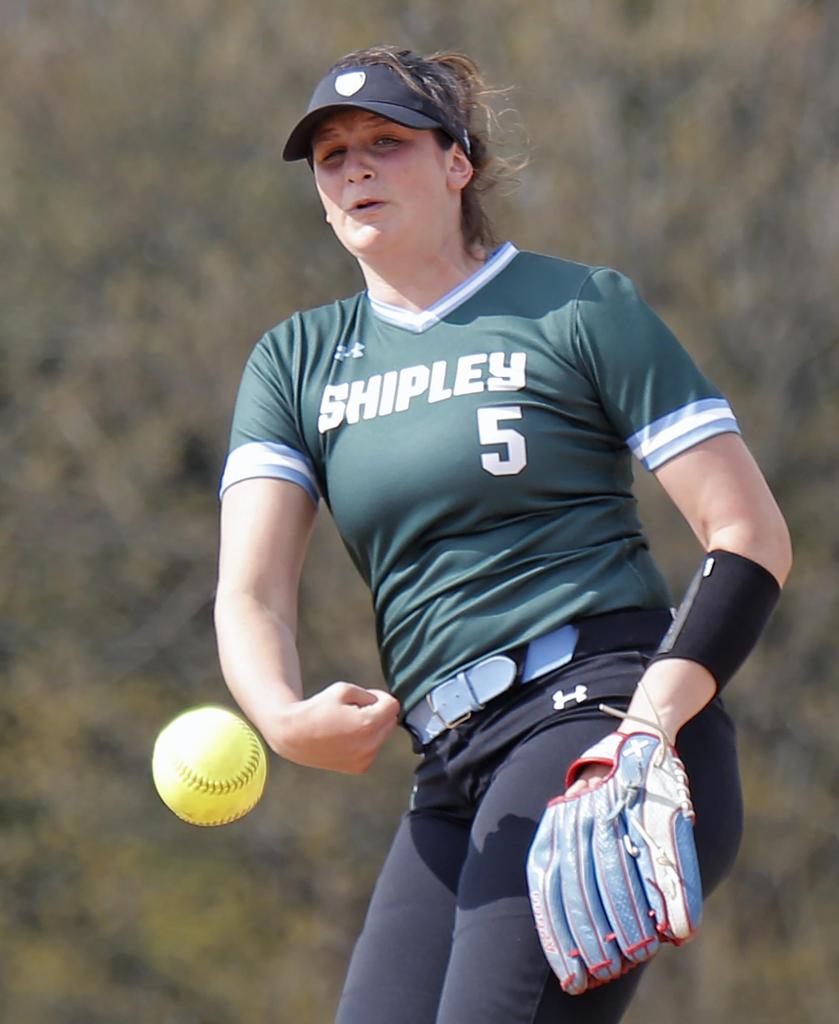 A “Friendly” End of Season Clash:

With the postseason just around the corner, two of the top teams in the FSL Franklin Division faced off in a matchup between Friends Select and Friends Central.

Friends Central would pull out the come-from-behind win, beating Friends Select 7-5. Friends Central’s Brianna Keenan had a great day on the mound, with nine strikeouts.

Things were going all Friends Select’s way to start the game. The Falcons scored three runs in the top of the first inning. Friends Central would answer with one run to make it a 3-1 ballgame.

The score would stay that way until the fourth inning. The lead would extend to 4-1, but in the bottom half of the inning, Friends Central’s bats would come alive and shorten the lead to 4-3.

The win for Friends Central put them in second place in the Franklin Division, jumping over Friends Select.

Earlier in the season…

Friends Central recorded a commanding 16-1 victory vs. the George School.