PHILADELPHIA – The recent rain may have caused some delays, but the Friends School League playoffs have begun, and the runs have been plentiful.

Visiting Germantown Friends erupted for eight runs in the fourth inning and overwhelmed Academy of the New Church (ANC), 15-5, in a Friends Schools League first-round contest. The victory sends the fifth-seed Tigers (5-5 in Penn Division) to Wednesday’s semifinal against undefeated Friends’ Central (10-0 in Franklin Division). Three-seed Westtown (8-2 in Fox Division) will face two-seed Shipley (9-1 in Penn Division) in the other semifinal.

The league championship is scheduled for May 14. 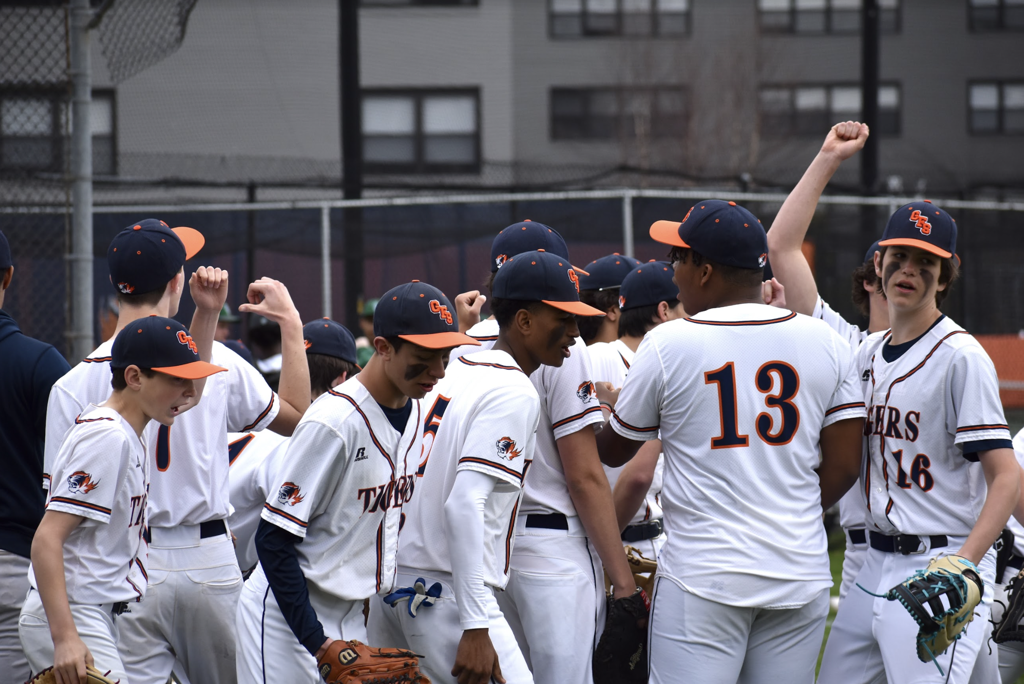 Germantown Friends, which is trying to advance to the league finals for the first time since losing 6-0 to Friends’ Central in the 2013 championship, scored in every inning. The Tigers tallied two in the first and fifth, one each in the second, third and sixth, and the aforementioned eight in the fourth.

As we prepare for the championship on Saturday, let’s reflect on a few of the highlight games this past season:

It was a windy afternoon as the Shipley School played host to the George School to kick off Friends School League play. Shipley came out as the better team on this given day topping the George School 11-2, protecting their home diamond.

“Never want to start 0-1, always have to start 1-0. Does not matter if you are playing the best team or the worst team. You need to start 1-0, get off on the right foot no matter who you are playing,” said Shipley senior catcher Sam Chairman.

Chairman, who is headed to Ithaca College in the fall, bats in the No. 3 spot for Shipley. He got the scoring on the afternoon started in the bottom of the first inning, ripping a single in the left field to plate Fran Turner, who led off the bottom half of the first with a triple.

“With college right around the corner, I want to work hard every day at practice and be dominant. Team wise, we need to continue to be active, stay loud in the dugout and win as many games as possible,” added Chairman.

Shipley would tack on three more in the bottom of the third to push their lead to 4-0. Danny Braslow’s single and a back-to-back walk would load the bases with one out. Justin Curran would double to plate the initial two runs, which would be followed up by Jake Vickers sacrifice fly to bring home the fourth run on the afternoon.

Both sides would exchange runs in the fourth to bring the score to 5-1.

The fourth inning would mark the end of the line for Shipley starting pitcher Dylan Colvin. Over four innings, he would register six strikeouts, while allowing three hits and four walks.

Shipley would find themselves in a bind in the top of the fifth with the bases loaded. With a run already coming across, George School had a prime opportunity to find themselves right back in the ballgame until Shipley head coach Bryan Bendowski signaled to Turner to come in and shut the door.

Turner would come in and deliver two strikeouts. Keeping the game at 5-2 and stop any ideas of a George School comeback.

“We had a guy Fran Turner come in and just shut it down. Come in and throw strikes. That is exactly what you need when you already have a lead,” said Chairman.

Shipley would explode for six runs in the bottom of the sixth. Shipley’s entire lineup would add valuable contributions throughout the afternoon. Curran led Shipley with three hits and three RBIs on the afternoon. Turner and Vickers had a pair of RBIs of their own. While Chairman and Ivan Bienkowski brought home a run as well.

“I really liked the energy we came with; we were not expected to win this game. We really came with a lot of energy, unfortunately the sixth inning got away from us. But, I believe we will be able to carry momentum into the next game,” said George School senior Jordan Harmon.

On April 5, Germantown Friends opened its season with a huge 13-3 victory over the George School.

Junior pitcher Daniel Mateffy graced the mound for the Tigers and the ace recorded 12 strikeouts in the victory.

“I felt great,” said Mateffy. “I just felt ready to go since the start of the day.”

Coming into their first league game, the Tigers were able to hone in on their skills while playing a slate of tough non-league opponents during a tournament in Myrtle Beach, SC.

“The biggest part of that trip is just preparing for this season,” said Germantown Friends senior Neil Bennett. “It’s great to go down there and have some warm weather and get as many games in as we can and be able to jump into the season and get a running start, and I think that’s what we did today.”

Friends Central headed to Friends Select on Tuesday, April 12, where they earned an easy 19-0 victory in just three innings. From first pitch to the last, Friends Central had a dominating performance.

Friends Select pitching staff struggled to find the strike zone consistently and walked in two runs in the first. With the bases loaded, Alejandro Flores drove in two RBI’s with a single. This was followed up by a pair of sacrifice flies from Jon Aman and Darius Adkins, in which they both collected an RBI.

In the top of the second, the Friends Central offense exploded once again, led by an RBI double from Flores and a three RBI triple from Adkins. Friends Select struggled in the field and allowed runs on errors. Friends Central’s lineup batted around and Brendan Aiken pinch hit for Flores and drove in two runs on an RBI single, with the team heading into the bottom of the second with a 15-0 lead. Adkins and Flores spoke on their individual and team success after the victory.

“Individually I thought I did pretty well,” Adkins said, “I was catching barrels, getting good hits, and running the bases. I think the team’s success was amazing.”

“My mindset throughout the game stayed pretty level and I was successful with all the at-bats I had,” Flores said. “The team’s success was really great. We all had high energy and kept ourselves up, which made us win the game.”

They also both had a shoutout for their starting pitcher, Caden Carlin, who pitched only two innings, but dominated the Friends Select lineup and did not allow a hit or run.

In the top of the third inning, Brayden Foxwell lead off the inning with a double and was drove in by Luke Buscaglia. Another run was scored off an error, and then Dylan Posencheg had an RBI single to finish the team’s scoring for the day.

Friends Central closed out the game in the bottom of the third inning and headed home after a successful road victory.

Earlier in the season…

Let’s take it back to March, shall we? That’s when Friends Central kicked-off FSL play with an 11-0 victory against Academy of the New Church on March 25.

Later in the season…

On Thursday April 14, Shipley hosted Abington Friends and earned a commanding 16-1 win in under three innings. Abington Friends got out to a 1-0 lead after the top of the first, but after that it was only Shipley who would be scoring runs.

The bats were on fire in the bottom of the first, which is when Shipley scored all 16 of its runs. Fran Turner led the Shipley lineup off with a leadoff double, and then with two runners on, Sam Chairman hit a three-run home run to start off the scoring, which Shipley head coach Bryan Bendowski acknowledged as a major point in the game.

“I think Sam Chairman’s line drive home run set the tone for us offensively,” Bendowski said. “He’s been a big addition to our lineup after an injury last year. Him being back in our lineup makes our other hitters so much better.”

Shipley continued to hit the ball hard and put the ball in play, and Abington Friends struggled to make clean plays, which led to many runs and men on base for Shipley off errors. Tommy Ball got solid contact and drove a ball into the left-center gap that was not fielded cleanly, which allowed him to advance all the way to home and knock in three RBI’s. Soon after, Jake Vickers smacked a ground rule double, which drove in two runs. Nate Panzer earned himself a three RBI double and Evan Buckley finished up the team’s scoring for the inning with an RBI single.

After the first inning, there was no more scoring, and Shipley was able to wrap up the game in the top of the third inning, which came just in time before a thunderstorm hit.

Bendowski shared the team’s goals for the rest of the season.

“Our goal collectively is to get better every time we step on the field. We have a history of peaking at the right time each year and look forward to the challenges ahead in our schedule,” said Bendowski.

George School starting pitcher Israel Rosseter was outstanding on the day, as he pitched four innings, only allowing one run, as well as collecting two RBIs on a single and fielder’s choice, respectively. The sophomore spoke on his outing after the game.

“I felt great. The first inning and beginning of the game was a little rough. The ball kept slipping but eventually I got used to it and I was rushing a little bit, but I worked to control my tempo and just throw strikes,” said Rosseter.

The score was 1-1 heading into the top of the fourth inning, but then the George School opened the flood gates.

Hayden Diver smacked a double down the right field line, knocking in a run. Jordan Harmon followed that up with an RBI single, and then the team lineup batted around and knocked in tons of runs off errors. Abington Friends struggled in the field and walked many batters, which allowed many runs for the George School.

The team continued to drive in runs off singles and doubles and marched their way to a 19-1 victory after only five innings. Rosseter added his thoughts on his own individual performance and his team’s outing.

“Today, I believe, as a team, we did really well on bringing energy to the game and we worked together. We haven’t been doing that a lot in the past, but it was nice to have that for the first time,” said Rosseter. “Individually, I think I did really well with maintaining focus and not letting the first inning get to my head and just throwing strikes and making sure I helped the team all the way through.”

After a close 4-3 loss to Shipley on Wednesday, April 20, Westtown marched their way to a 13-0 victory over Friends Select School the ensuing Friday.

Westtown’s bats could not be stopped, scoring those 13 runs in just a five inning game. Several of Westtown’s hitters had big days at the plate, including Carl Wagner who went 2-for-2 with two triples, four runs scored and two RBIs. Also having big days were Jake Diaz, 3-for-3 with two doubles, two runs scored and four RBIs, and Liam Sayer, 2-for-3 and three runs scored.

Not only was the offense great for Westtown, but their starting pitcher Luke Holgate had himself quite the day as well. Holgate, a sophomore, threw his first complete game shutout, allowing just two hits and striking out five.

Leading the way for Moorestown’s offense was Jaylen Patel with three extra base hits. Patel had two triples, a double, and five RBIs. All of this was just in five innings, when the game was called.

On the mound, Andrew Mercantini threw a gem. Mercantini pitched a complete game shutout, and struckout seven batters. He ended the game with a statement by striking out the last three batters in the bottom of the fifth.

MFS's Jaylen Patel addresses what attributed to his success vs. FSS - PSD Video by Jake Gabel