The girls game will be played at 5:30 p.m. , followed by the boys contest at 8 p.m. Both games are scheduled to air live on ESPNU.

There are 44 seniors selected for both the girls and boys games. The players are named in four waves of 11 players. Felter, a North Carolina commit, and Pearson, who is headed to Stanford, were named in the third wave.

A Catholic League product chosen to the girls’ squad is midfielder Kiley Mottice of Archbishop Carroll.

It only seemed fitting that Felter and Pearson would be announced together in the third wave of players. They are long-time friends who have played on the same club teams for years, including Big 4 HHH squad, which consists of many of the top players in the area.

“I was probably more pumped when she got it than when I did,” Felter said of Pearson.

Added Pearson: “It’s great that we are both going to play in this game.”

Both were humbled by their selections.

“I was pretty excited when I heard the news,” Felter said. “You get to play with the best of the best and it is an awesome opportunity.”

Added Pearson: “I just feel really honored…I watched this game so many times and have seen so many people I respect so much as players make this team and to be part of it is pretty amazing.”

The teams for the All-Star game haven’t been selected, with players either competing for the North or the South.

Pearson said that she and Felter will likely be working out this summer leading up to the game. 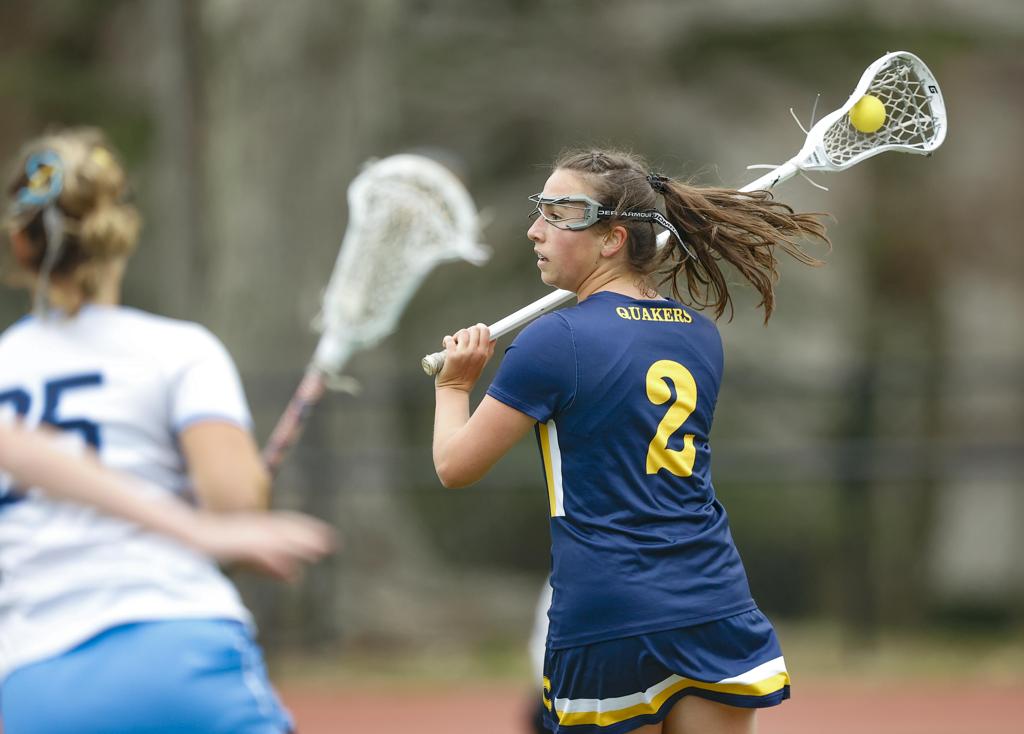 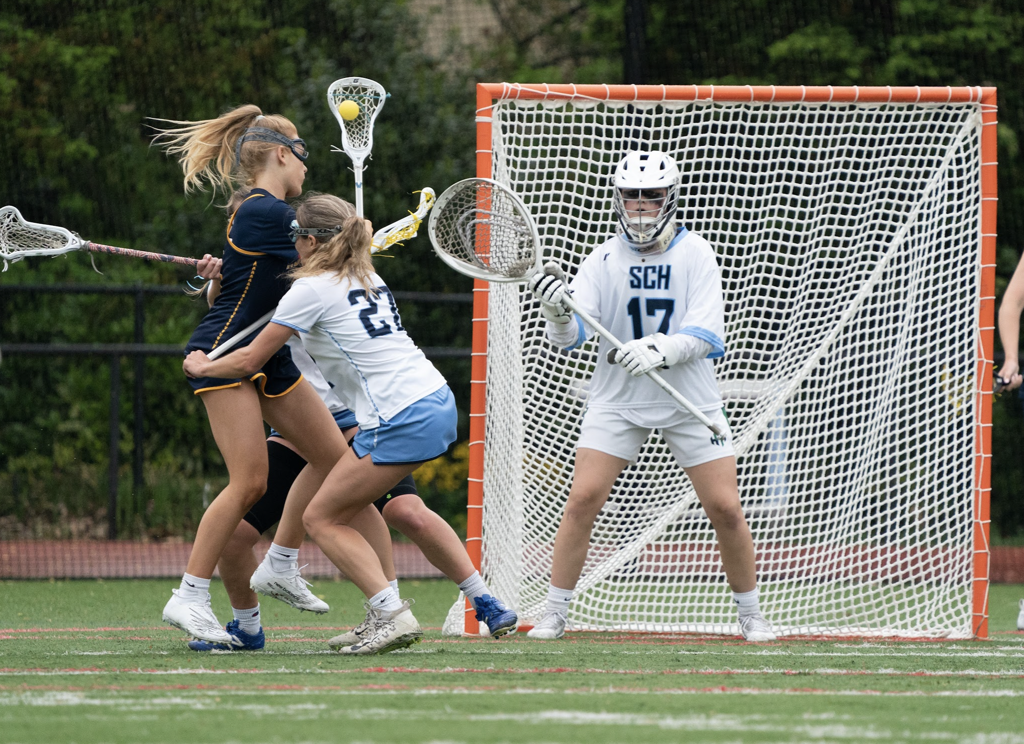 This is another statement on the strength of the Inter-Ac.

There are only 88 players (boys and girls) selected to this game and three girls and one boy from the Inter-Ac have already been chosen.

“It’s probably one of the best leagues in the country,” Felter said.

Pearson took it a step further, saying these selections show the quality of lacrosse in Southeastern PA. That statement could be made for both girls and boys lacrosse. (In addition, Garnet Valley attack Max Busenkell, who will attend Notre Dame and The Hill School long stick midfielder Will Schaller, a Maryland commit, have also been selected.)

“Some of the best lacrosse is played in this area and we have known that for a while and everybody else will know it pretty soon,” Pearson said. “It’s crazy to represent this and and some of the club teams.”

Last week Episcopal Academy clinched at least a share of the Inter-Ac title with a 9-7 win at Agnes Irwin. On Tuesday, EA clinched the outright title with a 14-12 win over Germantown Academy.

It was quite a season for Episcopal Academy, which won its first title since 2019.

There was no season in 2020 due to COVID and last year Agnes Irwin beat Penn Charter, 8-7 to win the playoff title.

This season there was no playoff, with the champion crowned based on regular season record. The seven teams played each other twice.

The key for Episcopal Academy was winning the close games against its closest challenger. EA beat Penn Charter in two one-goal victories, 11-10 and 12-11.

Episcopal Academy finished 19-2 overall. The only losses were 13-12 to Springside Chestnut Hill Academy and 12-11 to Summit (NJ), currently ranked No. 2 in New Jersey by NJ.com.

Ea senior Bella Piselli scores one of her two goals in win vs. Germantown Academy - PSD Video by James Quinn 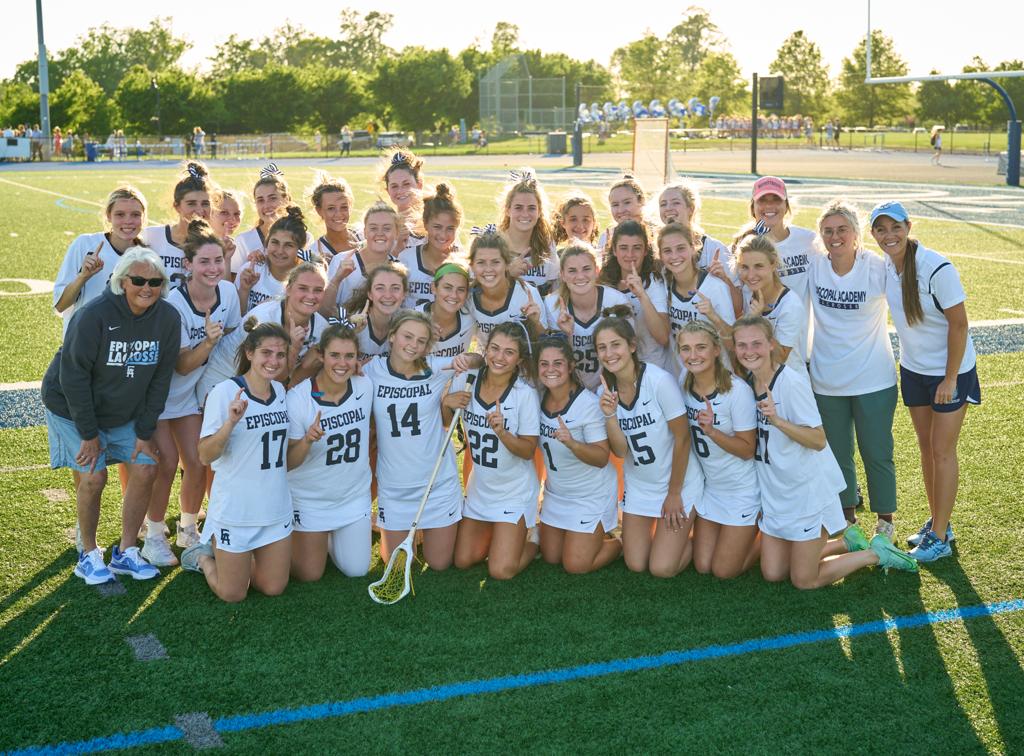 “While only two goals separated us from an undefeated season, those losses really taught us a lot and helped keep us motivated and hungry until the end,” Tomaino said. “The girls worked so hard for this and really committed to playing a team game in every area of the field. We had a very balanced attack, multiple threats on the draw circle and a defense that relied on trust and high communication. I’m so incredibly proud of their selflessness, resiliency and work ethic from start to finish!”

No doubt Episcopal Academy wasn’t in a sharing mood, wanting the title all for itself.

“Being Inter-Ac league outright champs was at the top of our goals list this season,” Tomaino said. “We knew that in order to achieve this goal, we had to take care of the little things and stay focused throughout the spring.”

EA had a team slogan it lived up to.

“Our team slogan this season was ‘Locked in Together’ and I think it was a great reminder that not only do we need to stay focused on the task at hand, but we also need to remember to do it together,” Tomaino said.

“They were our captains this season and they did a tremendous job leading the program and being excellent role models,” Tomaino said. “Bella was excellent on the draw circle this season and did a great job dodging from high on our attack. Cap also contributed on the draw but owned the crease and was difficult to stop around the cage.”

There were other major contributions from the senior class.

The defense, led by key seniors, was as strong as the offense.

“Kendal Elison, Megan Cassidy and Grace Schnyder (Scranton WLAX) helped anchor our defense this season, which was a huge part of our success this season as a program,” Tomaino said.

Another key player despite being out most of the season, was Morgan Stickley. 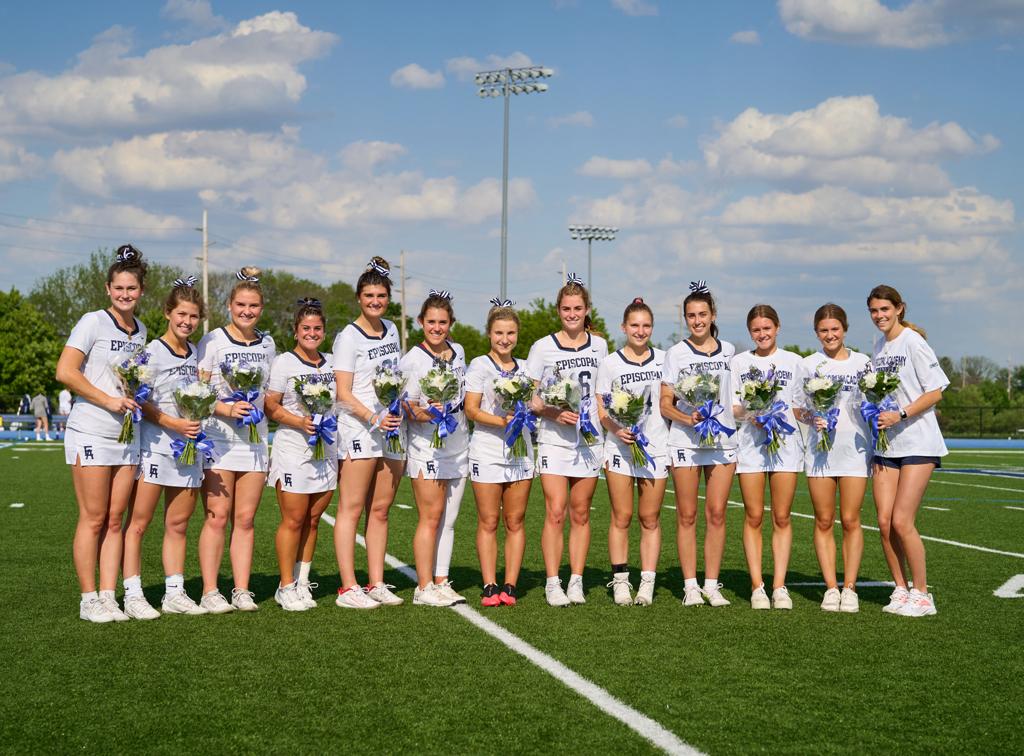 “Overall as a senior class, this group brought tremendous experience and great positive energy that helped guide us through this strong season,” Tomaino said. “I’m grateful to have coached them this year- their leadership will be missed!”

Episcopal Academy, with key returning players such as current junior Alexis Ventresca, freshman Quinn Whitaker and sophomore Sydney Richter leading the offense and junior defender Franny Gallagher and freshman goalie Grace Holland leading the defense, should again be a contender next season, but regardless, this strong senior class will be greatly missed.

Five Inter-Ac teams will compete in the Pennsylvania Independent School Athletic Association (PAISSA) tournament that began Friday, May 19 and will end with the 4 p.m, championship on May 26 at Cabrini.

Besides Penn Charter, the other Inter-Ac teams in the tournament are No. 2 seeded Agnes Irwin, No. 3 Springside Chestnut Hill Academy, No. 5 Academy of Notre Dame, and No. 8 Germantown Academy.

Also in the tournament are No. 4 The Hill School, No. 6 Mercersberg Academy and No. 7 Germantown Friends.

There has not been a tournament the past two seasons due to COVID.

Germantown Academy had one of its best showings on Tuesday when the Patriots fell to Inter-Ac champion Episcopal Academy, 14-12.

Mia Raven and Emma Goodwin each had four goals for the Patriots. Maggie Borek scored twice and Cate Luviano and Lucia Smigiel each scored once, with Sadie Hess making eight saves.

Mia Raven and Emma Goodwin each had four goals for the Patriots. Maggie Borek scored twice and Cate Luviano and Lucia Smigiel each scored once, with Sadie Hess making eight saves.

The Patriots ended their Inter-Ac season with a 16-13 loss to Notre Dame. Goodwin had five goals and one assists, while Raven and Smigiel each scored twice and Hess made 15 saves.

“I thought Tuesday’s game against No. 1 Episcopal Academy was among our best performances this season,” Germantown Academy coach Jay Foster said. “EA is deep with talent.

The Patriots trailed 11-7 at halftime.

“Down 11-7 at the half, we made our adjustments and behind the stout defense of our senior co-captains Quinn Dooley and Heidi Cross, we got a momentum shift and a run of goals to close the game to 13-12 with eight minutes to go.”

While it wasn’t a win, it showed great determination to stretch the division champs to the limit. 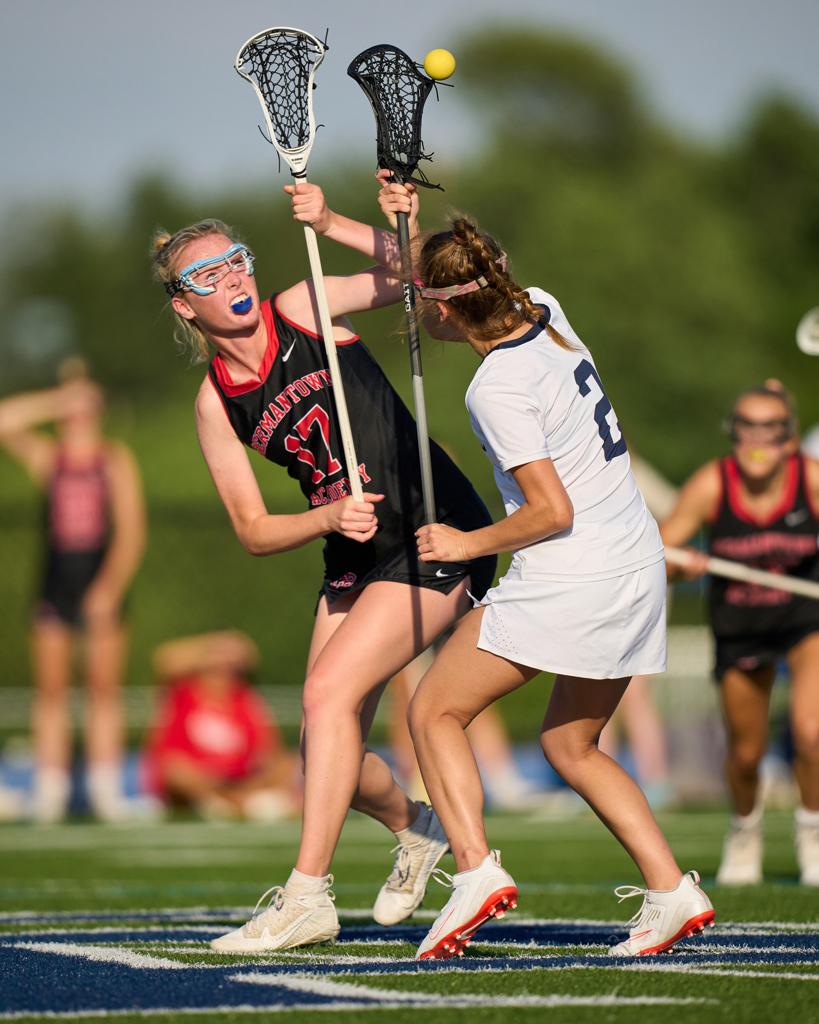 “I’m very proud of the effort and our pursuit of the ball for 50 minutes,” Foster said. “There is no quit in this team.”

Foster can’t say enough about Hess’ play in goal. A freshman, Hess came in with the idea of playing attack.

“She stepped up and sacrificed her entire season to fill the role of goalie two days before our opening scrimmage, having never played the position – just because she wanted to play and to help the team,” Foster said.

Now it looks like Hess may have a tough time returning to play attack after an outstanding freshman season in goal.

Sadie has transformed herself form being seen by the team as ‘an attacker filling-in as goalie’ to ‘that’s our goalie.’” Foster said. “Sadie is so selfless and committed to contributing to the higher team objective. It’s such an inspirational story.”

Notre Dame ended its Inter-Ac schedule with a 16-13 win over Germantown Academy, coming back after trailing 9-8 at halftime.

Junior Katie Onderdonk had seven goals and went over 100 for her career. She finished the game with 101. As impressive was she had 13 draw controls and one assist. Onderdonk has committed to Massachusetts. 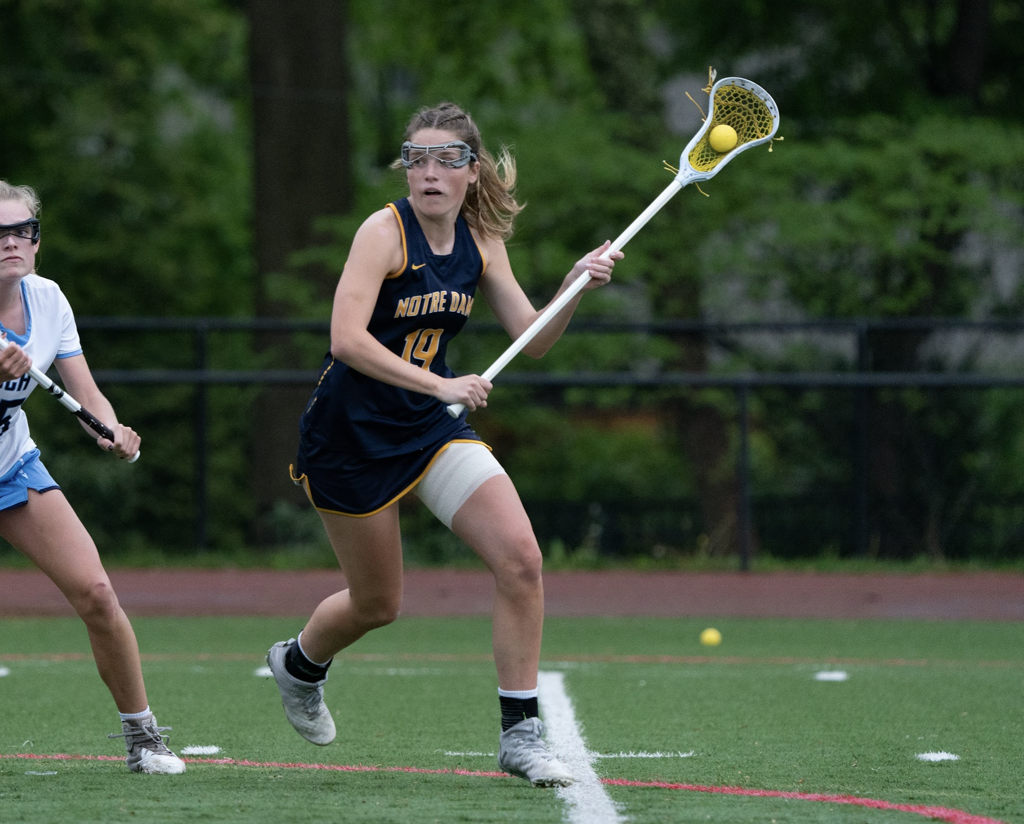 Penn Charter and Agnes Irwin, two of the top teams in the Inter-Ac and the area, went down to the wire in their final Inter-Ac game.

Charlotte Hodgson had the game-winner in the second overtime of a 12-11 triumph for Penn Charter. Hodgson had four goals, two draw controls and four ground balls.

Darcy Felter added four goals, one assist and three draw controls. Maddie Shoup had two goals and two ground balls and Bea Buckley and Gracie Shoup each had a goal and two assists.