BASEBALL: Catholic League Baseball: Friars and Vikings and Saints and Explorers . . . OH MY!

It’s not just college basketball that seemingly thinks they own that term. In any team sport, when the quarterfinals have been registered and the championship final tantalizingly  beckons within eyesight, this is the moment that produces near-euphoria for the victor and “We came so close” lamentation for the non-winner.

“Non-winner” – because when you get this far, it’s difficult to call any team a loser.

The finalists will land in the Catholic League championship 11 AM Saturday at the University of Pennsylvania.

Arriving at the Final Four required three favored seeds winning – one in extra innings – and, on paper at least, an upset.

If anyone was hoping that Bonner-Prendergast would enter the postseason resting on its laurels after finishing undefeated in the regular season, think again. 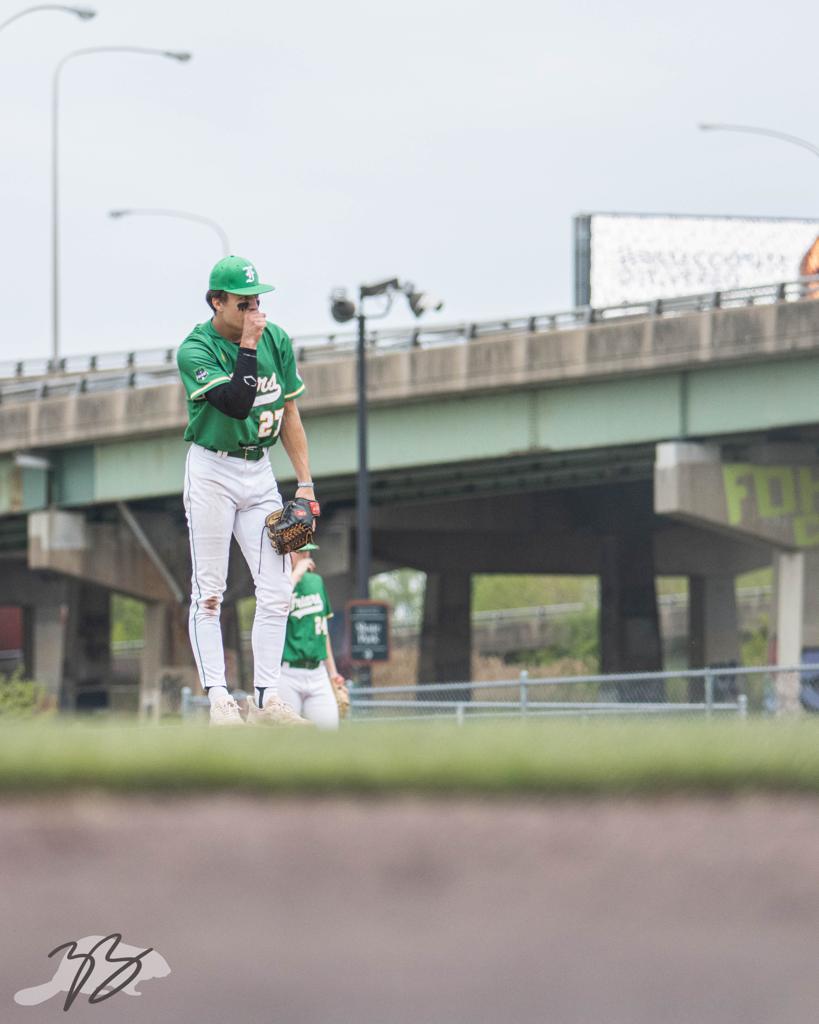 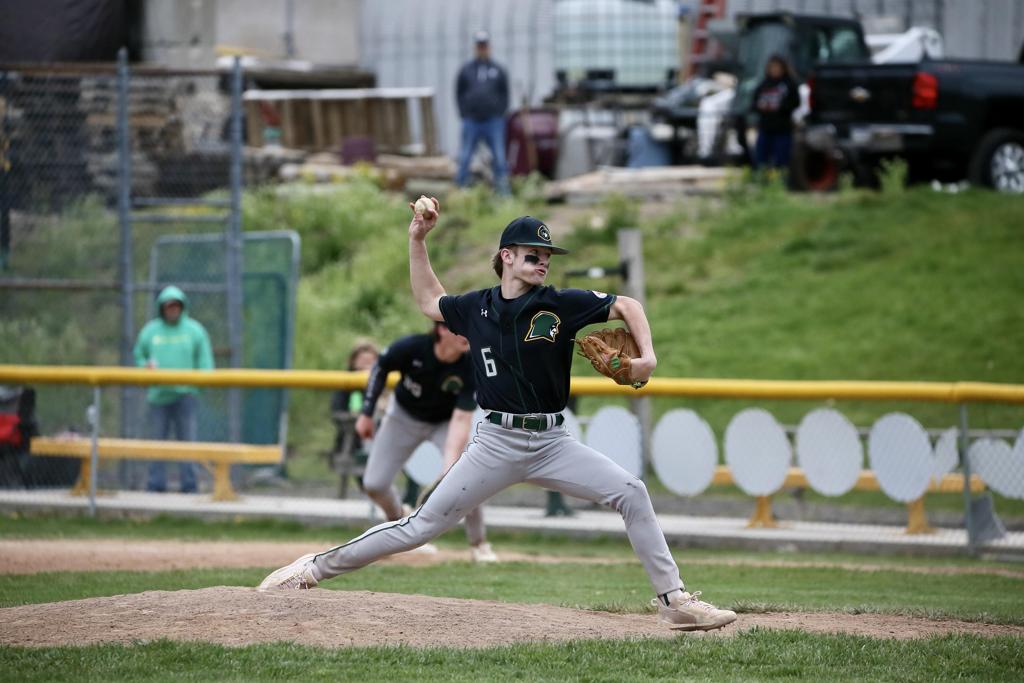 Scoring two runs in the first and five runs in the second, the Friars built a 7-0 lead before finishing off an 8-4 victory over eight-seed Roman Catholic. In the regular-season finale on May 17, the Friars defeated their next opponent, Neumann-Goretti, 6-2, and ended with a program-best 12-0 record.

This will also provide Bonner-Prendergast a chance to avenge a 4-3 loss to Neumann-Goretti in last year’s quarterfinals.

Senior winning pitcher Kevin Henrich went 2-for-4 with a run scored, and junior Kevin McGonigle scored twice for the Friars, who forced the Cahillites to make good pitches as they elicited seven walks to go along with six hits.

Sophomore Jaxon Kehoe downplayed his two innings of strong relief that garnered a save.

“It didn’t feel much different to me at all,” said Kehoe. “It was just another game that we had to win. Although it was to survive and advance, we just played the game the way we have been playing every other game this year.”

“It was definitely an extremely important game because obviously, if we lose, we’re out regardless of what our record was in the regular season. Before the game, we talked about how we knew we were the better team going in but we can’t let that change how we play. Anything can happen and anyone could beat anyone, especially in the playoffs. We had a great run in the regular season, but it means nothing now. We have to continue to perform like we have been, and we did a pretty good job at that today.”

Archbishop Wood trailed St. Joseph’s Prep, 2-1, in the home fifth. The 92-degree weather, lack of hitting, and speed of the game had the Vikings feeling understandably concerned.

Then Pat McKinney made his coaches and teammates forget about overheated Mother Nature.

After singles by sophomore Braden Kelly – “I got down two strikes and I was just focused on battling and putting the ball in play” – and junior Joey Gale in between a sacrifice bunt by junior Brian Klumpp put runners at the corners with one out, McKinney launched an 0-1 fastball over the centerfield fence.

Suddenly, a painful extended stay in a dugout sauna felt like a day at the Jersey Shore for the now-rejuvenated Vikings, who held on for a 4-2 win and a chance for redemption at their next foe, LaSalle. The Vikings lost a heartbreaking 3-2, eight-inning decision to the Explorers in last year’s championship.

“My thinking was to come through for my team,” said McKinney. “I don’t want to let them down. I know I worked for this moment and I always like the pressure to be on me. It was a big moment and I came up big.”

Saying “I knew I got it all,” McKinney wasn’t sure the ball went out until the symphonic noise of his screaming teammates storming out of the dugout.

“I heard everyone go crazy . . . it was a great feeling,” said McKinney, who stomped on home plate before being mobbed. “The feeling is amazing getting jumped on by your teammates. There’s nothing better than that.”

Sophomore Braden Kelly started off the winning rally with a leadoff single in the 5th inning of Wood's Quarterfinal win vs. St. Joe's Prep - PSD Video by John KNebels

The senior hurler went the distance, surrendering only two runs, four hits, and two walks while striking out six. His defense shined behind him, particularly on a double play perfectly executed by seniors Richie Bonino-to-Aiden Myers-to-Sean Slowinski to end the sixth, and later a fine one-out snare by a hustling Gale in the seventh.

“I’m really tired right now,” said a visibly fatigued Trommer. “I was just trying to push through those last couple of innings. I felt confident in myself to go out the next two innings and just shut them down."

“We talked with our guys leading up to this,” said DiGuiseppe, Jr. “Once you get into the playoffs, it’s a whole new season. You can throw the seeds out the window. The Prep has a tremendous amount of talent. Anthony (Prep coach Anthony Valucci) and his staff really do a great job. We knew it was going to be a battle today. Our goal was to play one pitch at a time.

“What I was most proud of was our kids, especially getting behind early . . . they kept playing. There’s going to be highs and lows, but you have to keep playing baseball. I thought our kids did a great job today. I’m super, super proud of them."

Few accomplishments rival being the person most responsible for a victory.

Although he had enormous help, junior Yariel Rodriguez’s walk-off single in the bottom of the eighth inning proved most pivotal to four-seed Neumann-Goretti’s 2-1 win over five-seed Archbishop Carroll. The victory sends the Saints onward to face top-seed and undefeated Bonner-Prendergast, which defeated Neumann-Goretti, 6-2, in a May 17 regular season finale.

“The walk-off was incredible,” said Rodriguez. “I didn’t think I would be the one to walk us off. I actually had a huge feeling that my teammates ahead of me would be the ones to do it. It wasn’t the case though.”

Both teams scored runs in the fourth. In the eighth, the Saints had loaded the bases with no outs, but Carroll induced a double play before intentionally walking sophomore Evan McCoach – who earlier had gone 2-for-3 with a run scored – to load the bases.

That proved to be a mistake when Rodriguez lined his second hit of the game over the head of the right fielder to end a fast-moving contest highlighted by stingy pitching by N-G senior Jameson Masino (6.2 innings, 6 hits, 1 earned run, 1 walk, 4 strikeouts) and Carroll senior Roman Tozzi (5 innings, 4 hits, 1 earned run, 2 walks, 6 strikeouts).

“When they intentionally walked Evan to put the bases loaded with two outs, I knew it was my time to shine and come through for my teammates, especially our seniors,” said Rodriguez. “I got to a 1-1 count after taking a curveball for a ball, so I knew immediately that I was going to get a good pitch to hit.

“So I geared up and put my best swing on his fastball and hit it over the right fielder’s head to win the game. It was an amazing feeling because we survived. We get to advance in the playoffs.”

A triumph over undefeated Bonner-Prendergast would demonstrate an epic accomplishment.

“For sure,” said Masino. “Taking down the one seed and taking them down from their undefeated season as a four seed would feel great for our team. It would make our playoff run 10 times better and show what we’re made of.” 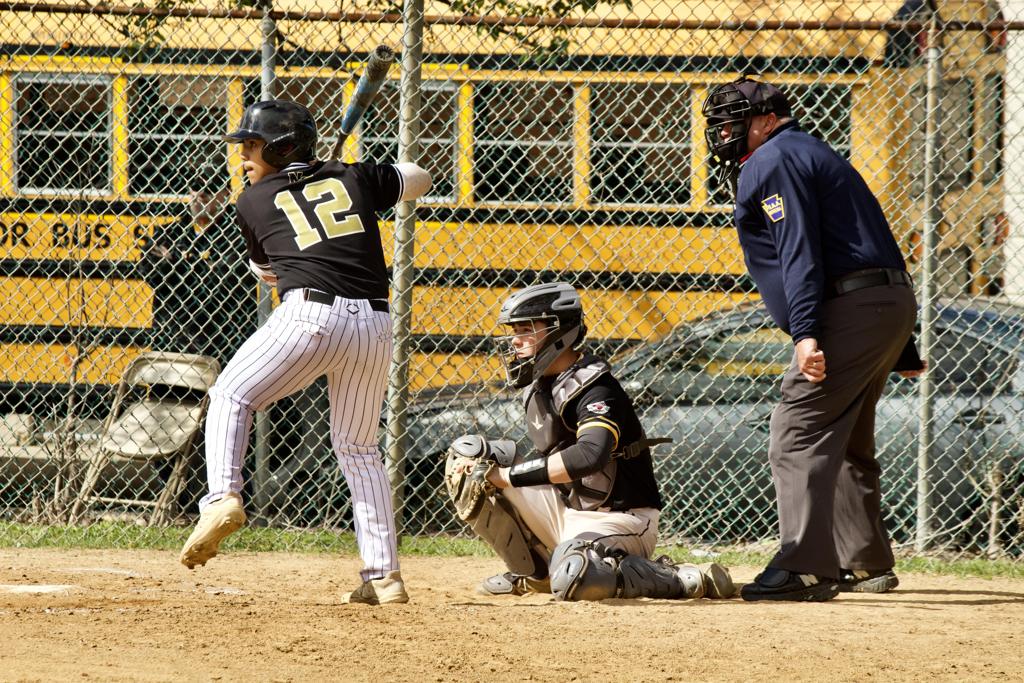 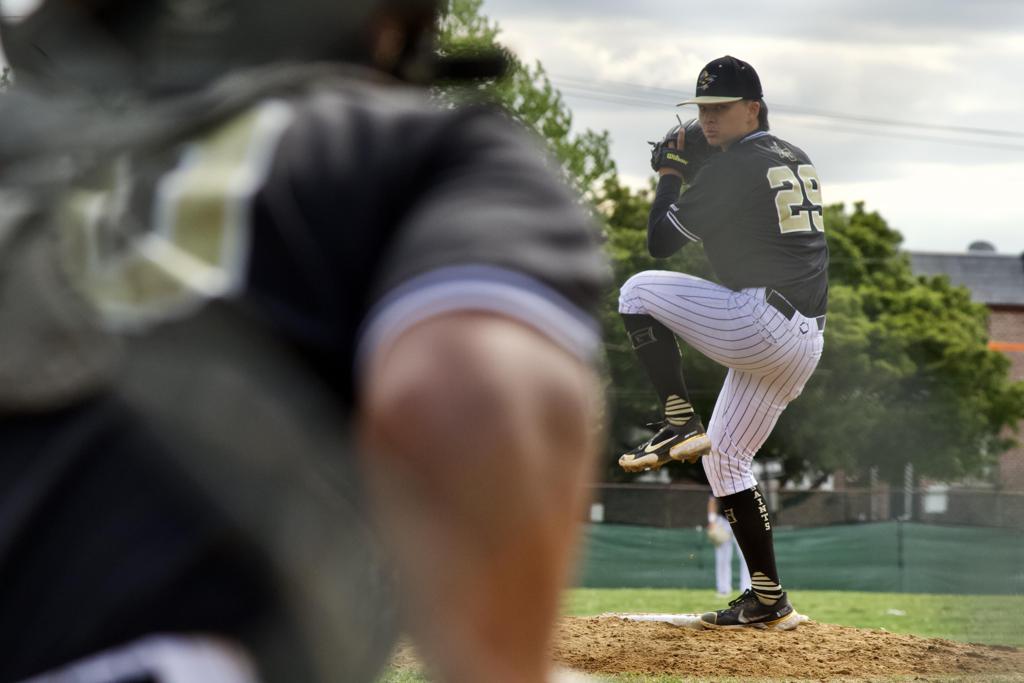 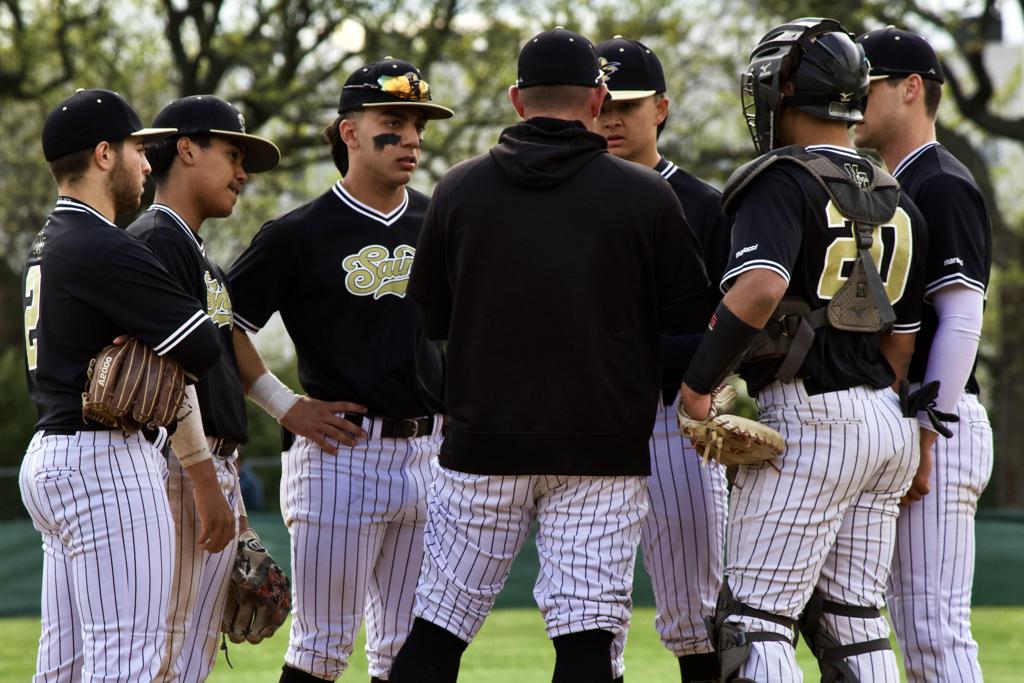 Neumann-Goretti coach Mike Zolk lauded both the Saints and the Patriots.

“It was a great baseball game by both sides,” said Zolk. “Jameson Masino led the way for us on the mound. As a senior it was his last start on our field, and he really left it all out there for us. It was a pitchers’ duel. Our guy threw great for us; their guy (Tozzi) threw great for them.

“We just had a few things go our way at the end there to help us advance. It felt like one of them typical Neumann-Goretti baseball post-season wins. We played tough, we played together, and we played for our seniors.

“Carroll is a well-coached team that was also led by great seniors. We just did a few more things right that day to get us the win. Our message to our guys has been to make every day about us. It doesn’t matter who is in the other dugout, who is there to watch, who is umpiring. If we bring the energy, we have the presence, and we keep playing together, we are going to be a tough team to knock out.”

Defending Champions . . . Back on Track

Unaccustomed to the role as underdog, La Salle ignored the logic and resembled their status as three-time defending Catholic League champion.

Behind senior Kevin Kell’s five shutout innings and an offense that scored runs in four of seven innings, the six-seed Explorers upended three-seed Father Judge, 6-1, and set a semifinal date with two-seed Archbishop Wood, to whom the Explorers lost, 10-6, in their April 4 season opener.

“That was easily the best game we had all year all around,” said Kell, who allowed two hits and two walks while striking out seven in only 75 pitches. “The bats, the defense, and the energy from the bench . . . it all came together in a huge win. Now we just look towards the next game. We just have to trust our approach and play the game.”

Junior Tajir Parker and senior Aidan Bretschneider each contributed two hits, one double, two runs scored, and an RBI apiece as the Explorers scored multiple runs in both the third and sixth innings.

“This was the best game we have played so far this year,” said Baquero. “We are a completely different team than what we were at the beginning of the year. Our guys are hungry to bring home a hubcap, and today that showed with how we played. We took really good at bats in the first few innings to get their starter’s pitch count up, and our competitive spirit was through the roof.

“The playoffs are a whole new season, and the regular season record doesn’t matter anymore. We are hungry and are bringing our best baseball these next games.”

Having participated in so many must-succeed situations en route to last year’s PIAA state championship, those who remain from that historic squad are familiar with pressure. 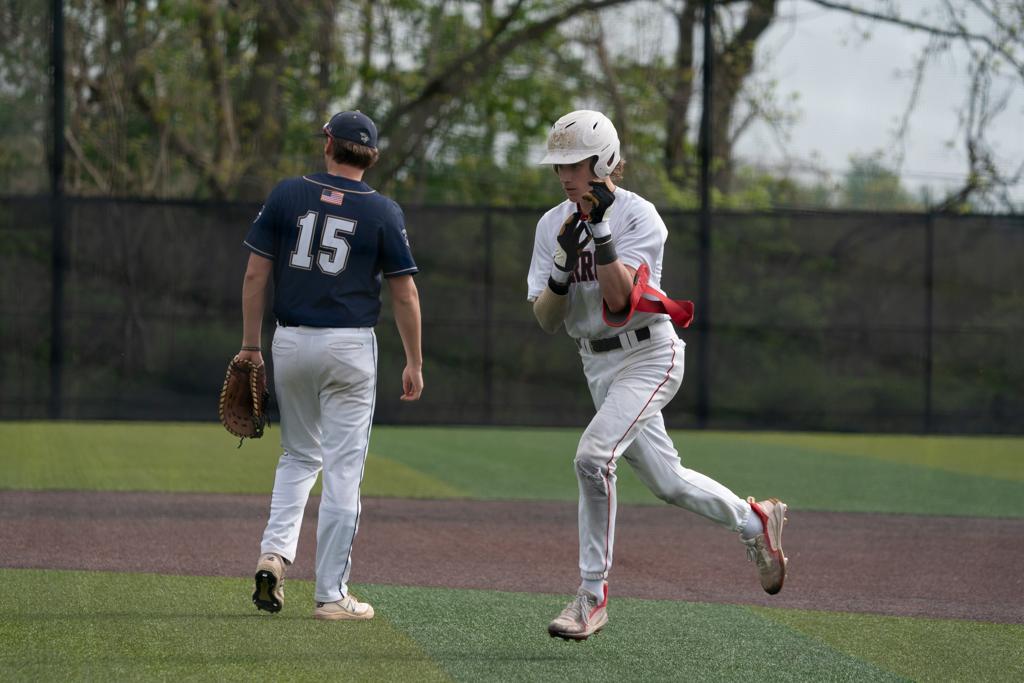 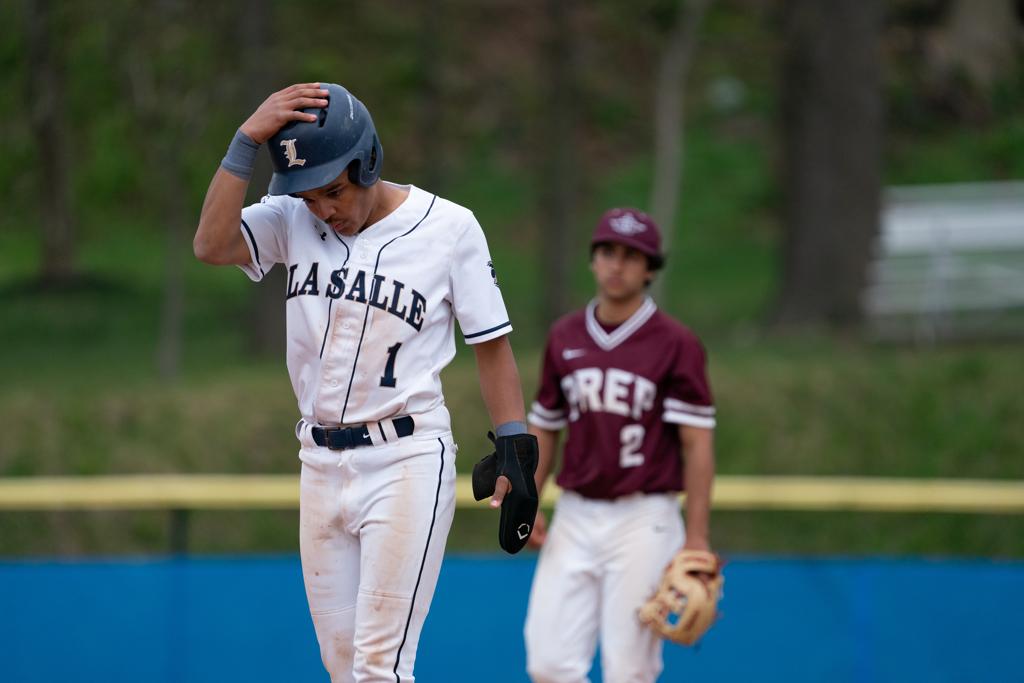 Even though the Explorers lost two of their final three games before the playoffs, senior Jephson Hadson-Taylor saw his teammates in a confident light.

“This win was important to show how far we came as a team thoughtful the year,” he said. “Our goal was to be the best team we can be by playoffs and play for as long as possible. This win helped show how we are getting closer to our goal.”