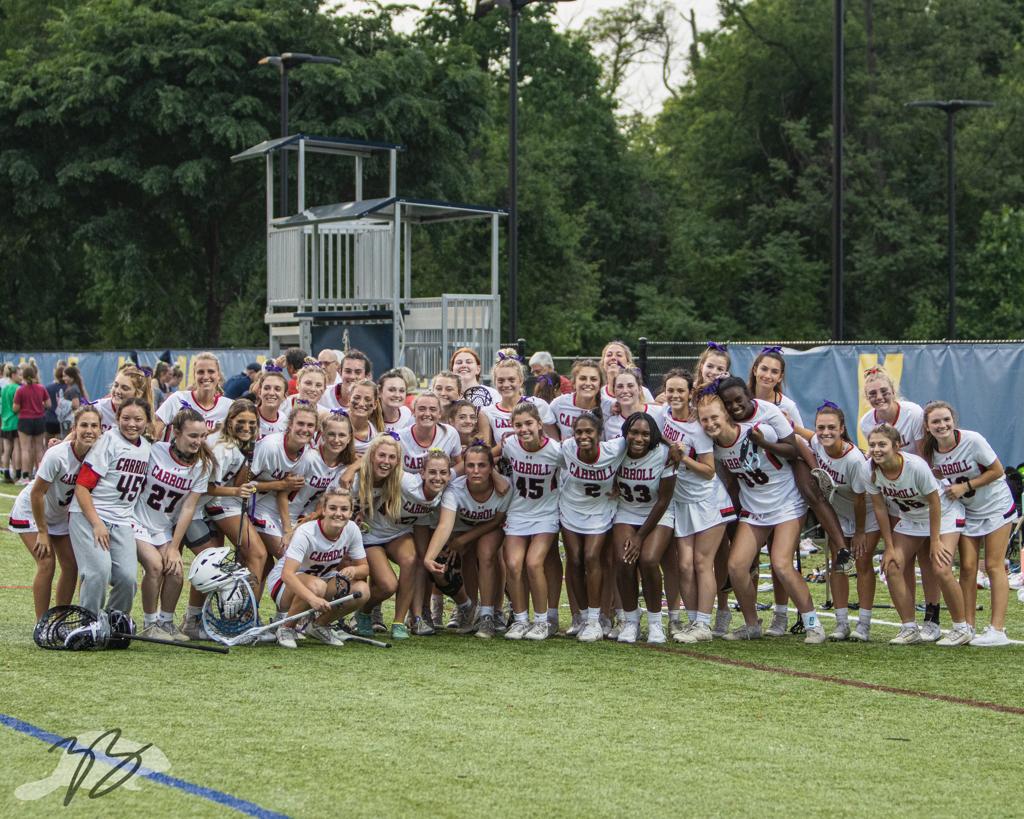 Archbishop Carroll - your 2022 PCL champions - are heading to the PIAA 2A state championship! - PSD Photo by Zack Beavers

ASTON, PA – The Archbishop Carroll girls’ lacrosse team is one win away from winning its second straight state championship and third overall.

Before tomorrow’s (June 11) PIAA Class 2A final against Twin Valley 4:30 at West Chester East High School, some of the Patriots were asked to reminisce about their 17-7 Catholic League championship win over rival Cardinal O’Hara May 20 at Neumann University.

This wasn’t just any title. It was the day that Carroll’s incredible PCL championship streak under the tutelage of coach Lorraine Beers became legal . . . it turned 21 years old.

And so, with the PCL streak having reached metaphorical full maturity, did this title mean a bit more than others?

“I think the championship game has helped give our team more confidence as we moved toward states,” said senior Kiley Mottice, whose five goals included the 150th of her sensational career that continues next year at the University of North Carolina. “It is an amazing thing to be a part of.

“I am so grateful that I decided to go to Carroll and be a part of a family that wants to win for each other and for our coaches.”

In the PCL final, Kiley Mottice scored 4 goals including the150th of her career - PSD video by John KNebels

“Each year it’s a new better feeling because you are able to experience it with a new group of girls under different circumstances,” said Wilson. “This year with being undefeated, the feeling of bringing the plaque home again was unmatched. Being a part of the Carroll lacrosse team has been the best experience. It has taught me so many valuable lessons on and off the field.

“Now, going to the state championship for the second year in a row and having the opportunity to defend our title is what we have been working for all season. It is so exciting to share this experience with the team.”

The Bleckley sisters, junior Ava and sophomore Chloe, outscored O’Hara on their own, with Chloe tallying five goals and Ava adding four – along with two assists.

“I think the championship is always a special game because of how long the winning streak is,” said Chloe. “No one wants to be a part of the team who loses the streak that Coach Beers has made.”

“This was my first PCL championship win, and to be a part of something so special is just so awesome,” she said. “I don’t think it has a different meaning. I think that it is awesome and is definitely motivation to get another one!"

Though Carroll won by 10, junior goalie Bridget Robinson was sensational in goal with seven saves – several of them key stops that neutered O’Hara’s momentum.

“I think we all still understand how important these championships are and that’s what we are working towards all season,” said Robinson. “Personally, the championship for me means being a part of something bigger – the Carroll girls’ lacrosse program and the legacy we are continuing.

“Being a part of this program, but especially this team, is amazing. Everyone is always so supportive even when mistakes are made, and it’s just a really special environment that I don’t think many other high school teams have.”