RADNOR, PA - It’s not the best situation to be in, but it also beats the alternative for the Inter-Ac/Independent team in the 36th annual Carpenter Cup All-Star baseball tournament.

In both of its games, the team has trailed by at least three runs.

And yes, both also ended in victory.

The latest came during Friday’s 8-6 quarterfinal win over a feisty Delaware County team at Archbishop Carroll.

That win punched Inter-Ac/Independents’ ticket into Sunday’s semifinal at Citizens Bank Park in a rematch against defending champion Tri-Cape of South Jersey.

Meanwhile the Philadelphia Catholic League met its match with another of South Jersey’s powerhouse teams, Burlington County, falling 9-6 in the second game of the double header during a broiling day of baseball at Archbishop Carroll.

Like Inter-Ac/Independent, the Catholic League showed some fight, but wasn’t able to overcome a Burlington County team that was deep in pitching, played strong defense and had an endless supply of offensive talent.

This year due to a scheduling conflict, only the semifinals will be played at Citizens Bank Park and once again it is like a New Jersey invitational, with three of the four teams from the Garden State.

Inter-Ac/Independent will meet Tri-Cape in Sunday’s 9 a.m. opener. That is followed by Burlington County against Mercer Country at 12:30. Monday’s 1 p.m. final is at FDR Park.

Once trailing 5-2, Inter-Ac/Independent tied the score with three runs in the top of the seventh inning. The rally was started the hard way – with nobody on base and two outs.

Delaware County, however went ahead 6-5 in the bottom of the eighth on an RBI single by senior third baseman Dom Carafa of Marple Newtown.

And then came the top of the ninth and that’s where the long at-bat started things off.

Leading off the inning for Inter-Ac/Independent was junior right fielder Fran Turner of the Shipley School. Turner kept fouling pitch after pitch off and looked like he didn’t want anybody else to come to the plate.

Finally, he put one in fair territory to left center field for a leadoff double.

“It seemed like I fouled off about 20 pitches,” Turner said, and he wasn’t exaggerating by much. “I missed my pitch once or twice and obviously I had to battle with two strikes.”

Down a run, last inning, backs against the wall, and Turner couldn’t have been more excited.

“I felt great because I was leading off the inning, nobody on, nobody out so I just knew my job was pulling through somewhere and get on base,” said Turner, who was 2 for 2 with two runs scored.

After Turner advanced to third on a groundout, Buscaglia was hit by a pitch putting runners at the corners.

Then junior catcher Ajejandro Flores of Friends Central broke the tie by roping an RBI double to left.

“It felt so good, it felt amazing,” Flores said. “I wasn’t nervous at all when I was up to bat and I knew that something good was going to happen.”

It didn’t end just there.

Friends Central junior left fielder Darius Adkins then made it 8-6 with an RBI double.

This looked a lot like the Friends League final where Friends Central went unbeaten in winning its second straight championship.

Before moving ahead, one more word on comebacks.

In its opener this tournament, Inter-Ac/Independent earned an 8-5 victory over Delaware South during a game in which the winners trailed 4-1 after two innings.

So this is not a team that rattles very easily.

In the bottom of the ninth, Penn Charter junior righthander Scott Doran showed why he is a Pitt commit by recording three strikeouts, two looking, sandwiched by one swinging.

Imagine, being on the mound for the last out, knowing you just earned a date to play at the Phillies ballpark.

“It’s definitely an adrenaline feeling, I definitely had energy going, knowing if I could close it out, we get to play where Zach Wheeler throws, Aaron Nola (pitches), it’s just awesome,” Doran said. “It’s going to be awesome.”

Doran, who threw an inning and a third, said he would be ready for Sunday.

The winners also got a big performance from Springside Chestnut Hill Academy senior left-fielder Chuck Norton, who was 2 for 2 with a run scored. Malvern Prep junior first baseman Tague Davis had an RBI single in the first inning and Shipley senior DH Sam Chairman had an RBI groundout in the fourth.

Give Delaware County credit. This team fought, but pitching wise, seemed to run out of gas. This is a young team with impressive players such as Ridley freshman left fielder Connor Kelly, who was 2 for 2.

Strath Haven junior center fielder Alex Pak had the defensive play of the game when he gunned down a runner from home after catching a fly ball for a highly impressive double play.

If this unit stays together, advancing to Citizens Bank Park should be a worthy future goal.

“We’re a young team and had a lot more people interested in playing this year,” said Delaware County head coach Anthony Monzo, the head coach at Ridley. “This is always my favorite event of the year, how many times do you get to have guys from other teams in your dugout and compete together.”

After the thrill of reaching Citizens Bank Park has been accomplished, now comes the tough part for Inter-Ac/Independent – a rematch with Tri-Cape in Sunday’s semifinal.

Last year the two teams also met in the semifinals and let’s just say that the Inter-Ac/Independent will be looking for revenge.

The good news from an Inter-Ac/Independent point of view is that the Tri-Cape graduated many top players from last year, including pitcher-infielder Chase Petty of Mainland, who was a first-round draft choice of the Minnesota Twins and has since been traded to Cincinnati. 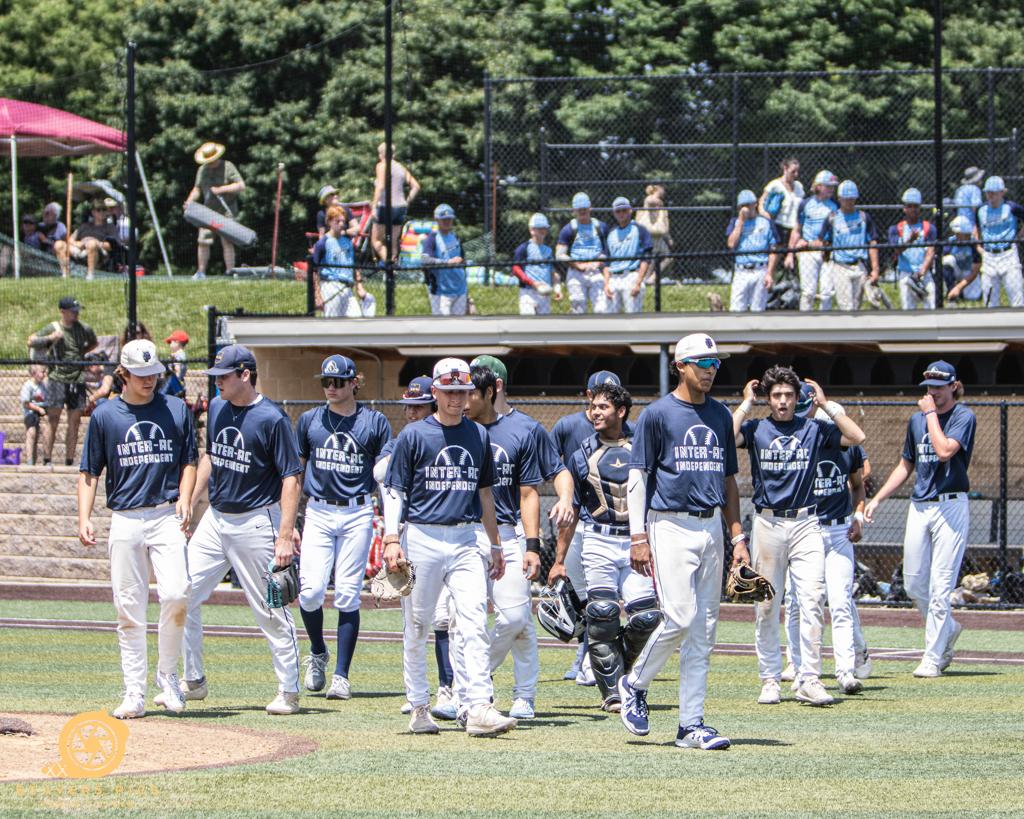 The Inter-Ac/Independent team advances to play in the 2022 Carpenter Cup semifinals against Tri-Cape at 9 a.m. on Sunday at Citizens Bank Park - PSD Photo by Zack Beavers

The bad news, from the Inter-Ac-Independent perspective is that Tri-Cape, consisting of teams from the Tri-County Conference and Cape Atlantic League in South Jersey, has a lot of new talented players.

Still, the key to victory in the first two games has been receiving contributions by players from both the Inter-Ac and Friends League.

It is the type of depth that will certainly be needed when facing Tri-Cape.

“I told the kids afterwards that this is an All-Star game and have had years in the past when players kind of showed up, going through the motions because it was an All-Star game,” said Inter-Ac/Independents head coach Jon Rubin, who also holds the same position at Friends Central. “In both of our games this year, it is so apparent to me that the 25 kids are wanting to win and they showed it on Monday and they clearly showed it today.”

The Catholic League was hurt by some early walks in its loss to Burlington County. The winners drew five walks and added another five hits to lead 6-1 after three innings.

The Catholic League chipped away, cutting the lead to 6-4 with three runs in the fifth. The big blow was a two-run double by Bonner-Prendie senior catcher Joey DeMucci.

It turns out DeMucci was just getting warmed up.

Carpenter Cup rules stipulate that a player can only play as many as six innings, but DeMucci caught the entire game due to an injury to one of his teammates.

Burlington County got some serious breathing room with one run in the bottom of the fifth and two in the seventh for a 9-4 lead.

The last hurrah for the Catholic League came in the form of a two-run home run to left field by DeMucci in the eighth inning.

That was his final at-bat during his storied career and when he takes his talents to Monmouth University, DeMucci, who had two home runs this past season for Bonner-Prendie, will cherish that final serious swat.

“It was awesome, my last high school at-bat I just hit a bomb, it felt great and knew it was gone as soon as I hit it,” DeMucci said.

While he obviously would have liked to have won, DeMucci, who went 2 for 4 with 4 RBI, liked the fact that his team went down fighting.

“We never gave up and some of our seniors last high school game and we gave it our all and tried our best,” he said.

Of course Burlington County was also trying its best and had plenty of punch, led by Cherokee senior first baseman Jeremy Cheeseman. An FDU commit, Cheeseman went 3 for 3 with a run and an RBI.

He is part of an impressive Burlington County franchise that has won four Carpenter Cup titles, the most recent in 2019.

Catholic League head coach Jim DiGuiseppe Sr., who assists his son Jim Jr. at Archbishop Wood, said it was invigorating coaching this squad. Among his only regrets was that he didn’t get to coach a player like DeMucci in high school.

Bonner-Prendie catcher Joey DeMucci hit a HR in his final at bat. Here he talks about the HR in the PCL's 9-6 loss to Burlington County - Video by Marc Narducci

“DeMucci is everything you want in a kid, he is smart, he knows how to take something off the swing,” DiGuiseppe said. “He is the real deal, he is a good person and he’s going to be a nice player because he listens and I am proud to work with him.”