PHILADELPHIA – Vinny Simpson can recall his most vivid moments from years of playing in the Danny Rumph Classic. He can remember when it was played outdoors at Mallery Playground at the intersection of Johnson and Magnolia streets in Philadelphia.

The former Cardinal Dougherty standout, who was named First Team All-Catholic in 2006 before going on to score 1,337 points at Hampton, has seen the playground renamed after the young man whose name represents more than a four-day slate celebrating the history of the sport that has helped shape countless lives. From Rumph Playground to Arcadia University to the Community College of Philadelphia and finally Tom Gola Arena on the campus of La Salle University, Simpson, 33, was part of the event early on and has seen a multitude of players who honed their skills on the blacktops of the City of Brotherly Love show up year in and year out to make the event bigger and better with each new chapter.

“It’s always fun to play in front of the city,” Simpson said. “With me being retired, I used to look forward to going overseas but right now this is my overseas, NBA and everything right here. Now that I’m done playing, I look forward to this every year. I try to get in shape about a week before.”

Simpson, who played 10 years overseas in countries such as Greece, Hungary, Sweden, Belgium, Argentina, and Finland to name a few, came in with many during the first few years such as former Neumann-Goretti standouts Antonio “Scoop” Jardine and DJ Rivera, who beat Simpson and Cardinal Dougherty in the Philadelphia Catholic League semifinals his senior season. Since its start in 2005, the outreach of the Daniel E. Rumph II Foundation was grown and so has the outstretched hand to talented players, ranging from local lore to the best in the world.

Philadelphia 76ers great and Naismith Memorial Basketball Hall of Famer Allen Iverson has played in the event as has Boston Celtics forward Jayson Tatum (2019). Lou Williams and Montrezl Harrell have also made appearances. Current Sixers guard James Harden brought his talents to W. Olney Avenue in 2016. On Monday night in the 17th annual Danny Rumph Classic Championship Game, the next era took over while the old guard showcased what the Philadelphia basketball community has long known about the event. 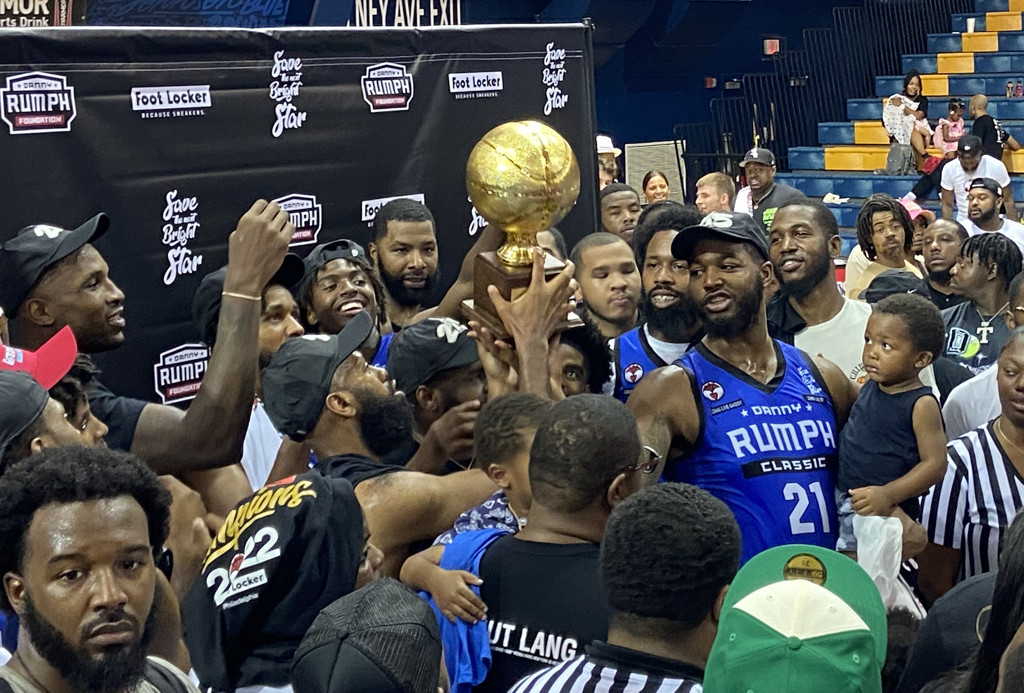 Sixers guard Tyrese Maxey erupted for a game-high 34 points and 10 rebounds in his debut while tournament MVP Marcus Morris poured in 29 points to lead FOE to a 117-111 victory over Blue Magic in the title game. Maxey scored 18 points, including 15 straight, in the second quarter and surpassed many by taking the floor. For a player who had 38 points in Game 1 of the NBA Playoffs against the Toronto Raptors, Maxey’s arrival from spectator on Thursday to difference maker on Monday gave the packed crowd a glimpse of what is to come when the NBA season tips off in October.

He drilled the first three-pointer on the night from straightaway and that would be all his scoring until the second. Simpson hit three treys on his way to 13 points while Maxey and Morris combined for 10 makes from behind the arc. Performances like those from Maxey, 21, are what give Simpson and other veterans hope that this event will only continue to grow.

“It was a good game, good crowd, and no violence,” Simpson said. “It was just good basketball. We need more of this in the city. I hope more guys from the area and the 76ers come together, and even maybe De’Andre Hunter and Cam Reddish, too. Guys like me are in their 30s now, so we’re done and it’s time for the youth to step in.”

Simpson is hoping to see players like Maxey keep the tradition and momentum of the event going as players like himself, Jardine and Khalif Wyatt, the former Norristown and Temple standout who played on 8EYE and was recently hired as an assistant at West Chester University, move into the next stage of their careers.

Simpson was hired on Mike Cook’s staff at Friends’ Central last season but took over the girls program midway through the season due to a coaching change. He’s looking forward to getting into the full swing of coaching and sharing what he has learned over a long and accomplished career.

“I’m very excited for what these girls will do this year,” Simpson said. “I have high expectations for them. I’m going to put them in the best position I can and go from there.”

Above all else, the event is about more than accolades achieved on the hardwood or what this guy did against his school’s rival over a decade ago. The Danny Rumph Classic honors its namesake, who starred at Parkway High School before going on to play at Western Kentucky. He tragically died during a pick-up game at the Mallery Recreation Center, now known as the Daniel E. Rumph II Recreation Center, 17 years ago due to a heart condition known as hypertrophic cardiomyopathy (HCM) or a thickening on the heart that makes it more difficult to pump blood to the rest of the body.

The goal of the Danny Rumph Classic is to raise money and awareness to those diagnosed with HCM and the hashtag #SavetheNextBrightStar on the event’s social media pages and merchandise perpetuates that. Seeing the faces of Scootie Randall, the former Communications Tech and Temple standout who scored 22 points including four straight to cut Blue Magic’s deficit to four in the final quarter, teammate Brandon Austin, who won three PIAA state titles at Imhotep Charter and traded baskets with Maxey all night before finishing with 32 points, and even another up-and-coming 76ers guard Isaiah Joe, who scored 16 points, displays that this event is here to stay.

Randall was seen talking to Fran Dunphy, his former coach and mentor now at the helm of the Explorers, and Donnie Carr, the former Roman Catholic star and La Salle assistant before the game. In the stands, Evan-Eric Longino and his brother, Jordan took in the action as did Archbishop Wood’s Jalil Bethea, who recently secured offers from Villanova and UCLA, and looks to be one of the next local prospects to carry the torch of so many who have played in this event and come before him.

Morris, the first player to win two Danny Rumph Classic MVP awards, and his brother, Markieff (eight points) have become mainstays in the event after first winning a PIAA Class 2A title in 2006 with former La Salle guard Rodney Green then a second as seniors before going onto successful careers at Kansas then the NBA. They brought in Harden years ago and added former first round pick Thomas Robinson, their former teammate with the Jayhawks who had 10 points and eight rebounds, to help in their title pursuit.

There’s a good combination of young and old at this event each year and that helps bring generations of Philadelphia basketball greats together on one court. Simpson is very adamant about having the younger players make a conscious effort to play in the Danny Rumph Classic and maintain what he and others helped create.

“We had Quade Green, Fatts Russell, and Lamar Stevens here this weekend,” Simpson said. “We’re waiting on the rest, and we hope the youth can keep it going.”

Green had himself an impressive weekend by scoring 12 points on Saturday, which included two clutch free throws to clinch a four-point win over Wyatt and 8EYE. On the opening night of the event on Thursday, the former Neumann-Goretti standout who scored 1,853 points and was a member of four PIAA titles during his high school career delivered his key moment. With REX6 trailing by two, he drew a foul from beyond the arc with one second remaining. He stepped to the line and, with the raucous crowd behind him, calmly nailed three free throws to ice the game. Slated to begin his second season with Grand Rapids Gold in the G-League, Green figures to be one of those players who will carry the mantle.

Throughout the weekend, more big names made their presence felt. Stevens, the Cleveland Cavaliers forward formerly of Penn State and Roman Catholic, played with CTC and scored 17 points. Jalen Brunson, newly signed off of his contract with the New York Knicks, scored 28 points against Randall, Austin and Blue Magic on Thursday then his former Villanova teammate, Eric Paschall, fresh off a new contract with the Minnesota Timberwolves, scored 14 of his 25 points in the second half on a CTC team chalk full of Wildcats in Dhamir Cosby-Roundtree, Jermaine Samuels, James Bell and coach Reggie Redding.

Prior to the championship, a rising stars game was played and some of the most talented seventh and eighth graders demonstrated why they may one day be playing in the Danny Rumph Classic. Jordan Dill, a rising freshman, just completed his first season at Germantown Friends School. It was evident that the 5-foot-11 lefty was more developed than most of his counterparts after averaging 16.5 points per game and being named the first eighth grader in Friends Schools League history to be named to the All-FSL team. Fellow incoming freshmen like Zion Robinson (Neumann-Goretti) and Nasir Ralls (Archbishop Carroll) performed well and could potentially be impact players in year one.

From Simpson to Randall to Green to Maxey to Dill, decades of basketball with a Philadelphia connection and flair were all in one building over the course of four days in early August. Some of the players will return to school while others will head to the NBA or overseas. Some players will relish these moments as they are all that remain of their playing careers and some are just getting started. For these four days, the Danny Rumph Classic is the centerpiece of Philadelphia basketball and the community at-large.