Conwell-Egan and Cardinal O'Hara win District 12 titles, advance to represent the PCL in the PIAA tournament 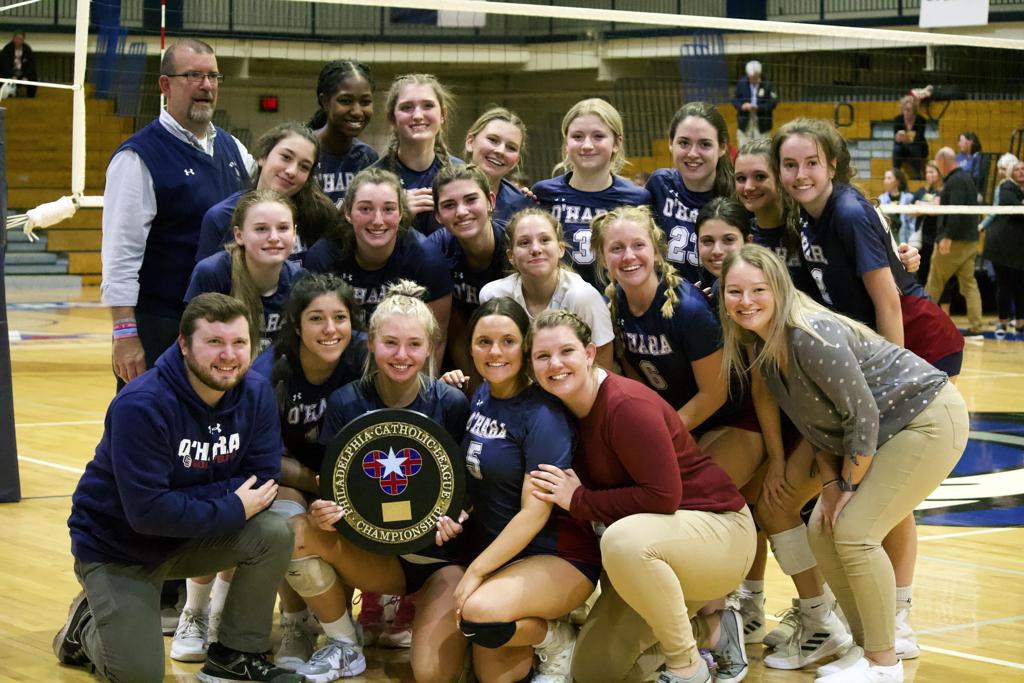 RADNOR, PA – As the Philadelphia Phillies and Houston Astros met at Minute Maid Park to begin their grand pursuit of a World Series trophy, a much greater prize was being decided at Cabrini University, the PCL Volleyball Championship. This year's championship bout saw a return of last year's contenders, Cardinal O’Hara and Archbishop Wood, as the Lions looked to retain their title from a year ago while the Vikings sought to make amends for the shortcomings of the previous season.

Last year, Cardinal O’Hara managed to secure the PCL title with ease, defeating Archbishop Wood in straight sets 3-0. This year’s championship match, however, would not be so one-sided. O’Hara and Wood duked it out in a true marathon match going five sets including one extended set that ended in a 30-28 score. Archbishop Wood fought hard and put forth a championship worthy effort, but ultimately it wasn’t enough as Cardinal O’Hara won their second consecutive PCL Volleyball championship by a score of 3-2.

It was a packed crowd at Cabrini College’s Nerney Field House and the Archbishop Wood students brought plenty of noise. The opening set got off to a back and forth start with neither team being able to establish a large lead. O’Hara managed to narrowly secure the crucial opening set 25-22 and set the tone early.

Cardinal O’Hara would then carry the momentum from their opening set victory into the second frame as they quickly got off to an 8-0 lead. Archbishop Wood would not go down easy as they quickly fought their way back to even up the frame and eventually steal the set, giving each team one set a piece.

The third set may have been the story of the game. Archbishop Wood carried their momentum from the previous frame into the third set and got off to an early lead. It would be short lived however as Cardinal O’Hara quickly evened up the set. What would then follow was an intense series of back and forth exchanges without either side yielding much in terms of momentum. Before long, both teams were flirting with 25 points apiece, but neither team could string together consecutive points to close out the set. It took some time, and a whole lot of determination, but O’Hara managed to eventually steal the set from Wood 30-28 and take the 2-1 lead.

With their backs against the wall and Cardinal O’Hara on the verge of clinching the PCL title, Archbishop Wood needed to dig deep if they wanted their season to end with a PCL plague. Despite O’Hara carrying the momentum from the crucial, and seemingly-endless, third set, Wood was able to take the fourth set 25-20 and tie things up at two sets apiece.

The PCL title came down to the fifth and final set. For Archbishop Wood, this was their final chance at getting revenge for last season’s championship defeat. For Cardinal O’Hara, this was the last thing standing in their way of a second consecutive title, a feat the school hadn’t accomplished in over a decade. In the end, Wood’s best attempts at coming back from being down 2-1 fell just short as Cardinal O’Hara won the set 15-10 to win the PCL title 3-2.

For Archbishop Wood, this is a disappointing end to their season, but one that shows promise. A year ago, the team struggled to take a set from Cardinal O’Hara in the PCL championship. This year, they pushed the Lions to a fifth set and nearly went home with the title. With an offseason of hard work and growth, there’s no telling where next season could lead the Vikings.

Prior to last season, Cardinal O’Hara had not won a PCL volleyball title in over a decade, this after winning ten straight PCL titles between 1999 and 2009. Now, they stand atop the PCL as the best the division has to offer. While they will be graduating a number of seniors, young players, such as captain Jasmine Sullivan, should have the Lions in position to go for the three-peat.

Special congratulations to Cardinal O’Hara who defeated Carver Engineering and Sciences 3-0 to claim the District 12 3A title and to Conwell-Egan who defeated Parkway Center City 3-0 to win the 2A title. Both teams will represent the PCL in the PIAA state tournament, with the first round beginning on Tues. Nov. 8.