VILLANOVA – The last time Fran Dunphy stood on the sideline inside Finneran Pavilion was Dec. 5, 2018.

He was the head coach of the Temple Owls and the Wildcats had just handed his team a 10-point defeat. At the time, Dunphy had no idea he would be leading another Big 5 program against Villanova years later but for the only man who has been at the helm of three different Big 5 programs, he knows building a foundation and establishing a culture are paramount to future success.

When he looked across the sideline to see Kyle Neptune, the successor to perhaps the greatest head coach in Villanova history in Jay Wright, he was able to recall what it was like when he took over both Temple and, prior to that, the University of Pennsylvania.

“It’s hard right away,” Dunphy said. “With the career that Jay had, it didn’t matter who took the job. It’s a whole different world. Kyle has the right mentality and maturity, and it looks like he really has the way he wants them to play down pat.” 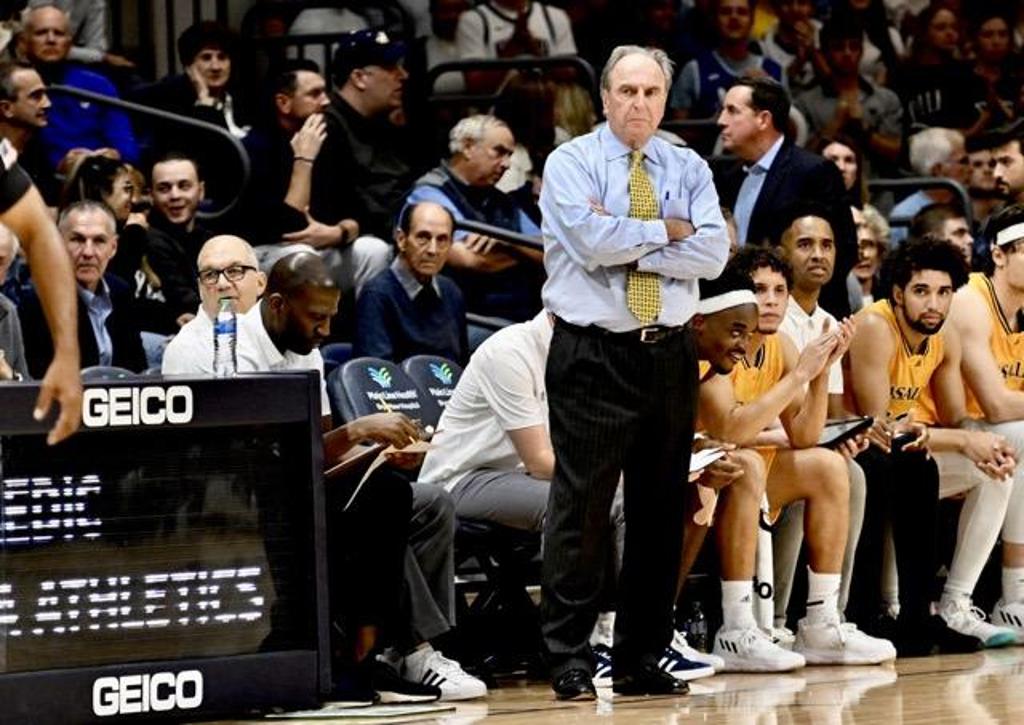 Caleb Daniels hit six three-pointers on his way to a game-high 24 points while Eric Dixon chipped in 20 points of his own as Villanova handled La Salle, 81-68 to give Neptune his first victory as head man of the Wildcats. While Neptune returned to a place where he knew success as an assistant under Wright after one season at Fordham, Dunphy was returning in his own way at the helm of the Explorers, his alma mater and a program looking to begin anew.

Dunphy and Neptune certainly have their similarities. Both succeeded members of the Naismith Memorial Basketball Hall of Fame. Dunphy took over for the late John Chaney in 2006 while Neptune was named the replacement for Wright after he stepped down. Taking over for two coaches whose teams had several notable battles and combined to win almost 1,200 games is no easy feat but Dunphy has a track record of winning and Neptune has the full support and confidence of the Villanova community, particularly Wright who now serves as special assistant to the president at the university.

Despite all the history and intrigue, Dunphy was simply thrilled to be a part of the game he has had profound success at as both a player and coach.

“You miss the juice,” Dunphy said. “When the ball goes up, it’s awesome watching the kids play and hope they’re doing good things out there. You miss it.”

The Wildcats (1-0) drilled 13 three-pointers on the night and shot 55.8 percent from the floor in a game that saw so many parallels to the previous regime. Wright was in the house as was former La Salle boss Ashley Howard. Randy Foye and Shane Clark were both in attendance to witness Neptune’s debut.

They watched as Daniels continued his steady rise that saw him pour in 13 points in the Final Four loss to Kansas last season. They watched as Dixon, who scored a school record 2,454 points at Abington, resembled that player and showed he’s more than capable of asserting himself while Villanova awaits the return of Justin Moore and the debut of heralded freshman Cam Whitmore, who underwent surgery on his right thumb and does not have a timetable for a return.

Regardless of who was playing for either side, the spotlight was shining brightest on Neptune, and he felt nothing but the utmost confidence in the culture that has radiated from the Villanova program since Wright took over.

“I get all the hype,” Neptune said. “It’s the first game in a Big 5 game with a brand-new coach. Going into the game just being part of the program for so long, I think everyone here has a unique resolve and all we think about is playing and coaching for each other.”

Daniels was perfect 4-for-4 from deep in the opening half, including one that pushed the lead to 17-7 at the 11:41 mark. Dixon put together a string of six straight points that put Villanova in front by 17 in the waning minutes of the first half. Even after Dixon and Daniels nailed consecutive three-pointers, the Explorers showed where Dunphy's tutelage has paid dividends in only a few months. Josh Nickelberry led La Salle (0-1) with 22 points and his trey with 13:41 remaining cut the deficit to 15.

Villanova got to its largest lead at 21 in the second half, but the Explorers kept fighting back. Hassan Drame (17 points), a new addition from the St. Peter’s squad that made the Elite 8 a season ago, hit back-to-back threes and La Salle trailed, 69-58 with 5:04 left to play.

In his first game on the sideline in over three seasons, Dunphy felt he did some things right in showing his players how to respond to adversity but also contends that there is a long way to go.

“I’m sure I was a little rusty in some of the things that I did and I’m sure my assistants will tell me about them,” Dunphy said. “It was great fun to be out there. I love being with the kids every day and it’s great to be with them, especially watching film and asking, ‘What were you trying to do here?’”

Jordan Longino, Germantown Academy’s all-time leading scorer with 1,763 career points, scored 12 points in his first collegiate start. He hit a smooth stepback three-pointer in a showcase of the evolution of his game and he sank two free throws to put Villanova in front 75-60. Then Daniels, as he did all night long, hit his final three-pointer to put the finishing touches on Neptune’s first win.

Monday night was the next chapter for two coaches looking to put their mark on their respective programs. Dunphy wants La Salle to get back to respectability and be able to compete on the court and recruiting trail. Neptune is looking to extend Villanova’s allure on the college basketball national landscape by furthering the sense of community and continuity that has been a staple for two decades on the Main Line. Nevertheless, it was merely a game between two men who have tremendous respect for one another and are proud to be in this position.