PHILADELPHIA – Most championships are decided by a traditional playoff system, where each game poses a do-or-die situation.

Not so in Philadelphia Catholic League football.

Recently crowned champions St. Joseph’s Prep and Bonner-Prendergast earned their hardware by blitzing through the regular season unscathed. The Prep handled their four Red Division challenges with relative ease, winning by an average score of 41-8, though it could have been much wider if the Hawks had not substituted the starters early. 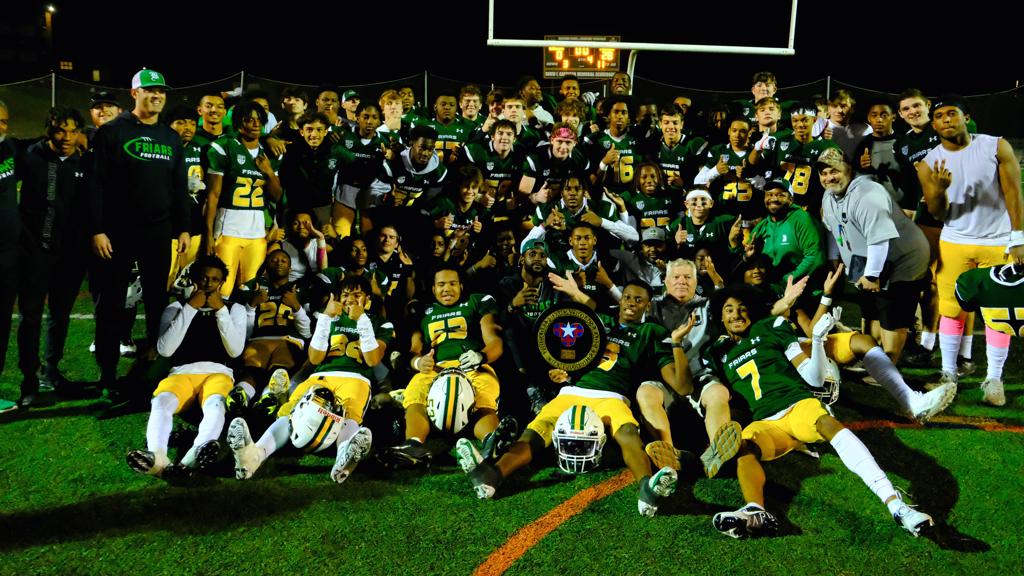 In the eight-team Blue Division, Bonner-Prendergast mathematically clinched the title with one week still to play and eventually finished with a perfect 7-0 record.

While their triumphs didn’t include a traditional elimination contest, they still celebrated a great achievement.

“We are so proud of what our kids have accomplished in such a competitive league,” said Bonner-Prendergast coach Jack Muldoon. “Winning the PCL Blue is a tribute to our players, staff, alumni and administration at Bonner-Prendie. We’ve been knocking on the door and finally broke through.

“We have a tremendous coaching staff . . . they carry me.

Defensive coordinator Kyrii Cooper and his staff don’t get enough credit for consistently being one of the best in our league and Delco. Our Offensive staff, led by coordinator Mike Melvin, has done a great job creating opportunities for all our athletes to contribute.”

That, however, wasn’t enough. The Friars had to take care of Conwell-Egan, which also defeated Bonner-Prendergast and entered its match at Bonner-Prendergast on October 21 with a 4-1 record and a chance to snatch the plaque seemingly out of nowhere with a win over B-P and another one eight days later against winless Archbishop Carroll.

No way was Bonner-Prendergast going to let that happen.

“Feels great,” said B-P senior linebacker Nick Smith, who blocked a punt. “This has been a long time coming and this is just the start. We just need to stay hungry. Our defense stopped the run like we were supposed to.

“It’s almost like it was just any other game. We came in at the beginning of the year with expectations set, and the first one on our list was winning the PCL, but all week during practice and even when we came into this game, we knew we were without a doubt the better team and all we needed to do was come out and play how we have been.”

The Friars appeared somewhat subdued until the clock showed all zeroes.

“Once we saw the plaque come out, every player and coach got excited and all the position groups were calling out who was next to get a picture with the plaque,” said Smith. “It’s a great feeling to make history, but I don’t think anyone’s content until we really prove ourselves and make it as far as we know we can this season.”

In their regular-season finale, the Friars escaped a 13-12 decision over upset-minded West Catholic. This past week, Bonner-Prendergast defeated stubborn Archbishop Ryan, 27-21, in a PCL Class 4A District 12 bout.

The Friars await Public League foe Bartram in the D-12 final at 1:00 PM November 12 at the South Philadelphia Supersite for the right to play in the PIAA state tournament.

SPRINGFIELD – Josiah Trotter caught it between the 10 and 15 and rumbled untouched into the end zone.

It was a fitting climax to St. Joseph’s Prep’s 42-0 victory over Roman Catholic in the Red Division regular-season finale at Cardinal O’Hara High School on October 28 that clinched the PCL Red. The Hawks started early with two first-quarter touchdowns and never looked back while raising their winning streak to seven.

After Trotter was presented a game ball by Prep coach Tim Roken, the Hawks rushed to their beloved senior linebacker and then rejoiced by raising the Catholic League championship plaque – the juggernaut’s 23rd all-time – to the sky.

“It was a blessing,” said Trotter. “Exhilarating. Seeing no one in front of you and then you’re about to be in the end zone; have to think about making the catch first.”

The pick six by “Trot” supplied one of numerous big plays by the potent Hawks.

Facing a third and 33 from the Prep 36-yard-line on the opening drive, junior quarterback Samaj Jones found Elijah Jones open to his left and hit the junior in stride for a 64-yard touchdown strike.

By halftime, the Hawks had added three more touchdowns to forge a commanding 28-0 lead. Jones would finish with three touchdown passes – one each to junior Kahseim Phillips from 15 yards, a 55-yarder to junior Brandon Rehmann, and the 64-yarder to Jones. Phillips added a rushing touchdown, as did junior Taj Dyches, who finished with 101 yards on 10 carries.

After a pick six TD to help his defense earn a shutout, Josiah Trotter was presented with the game ball - Video by John Knebels

“Our goal is to continue to win championships,” said Roken. “This is the first one to take off the checklist. We know what the ultimate goal is (PIAA state title), but this is a huge win for our program. We wanted to take this Catholic League championship back to 17th and Girard. We didn’t win the Catholic League last year; we didn’t win the state final. We were in those opportunities. This is a group that learned by those.

“They’ve been hungry all offseason. Enjoy this one, get back to work and start to prepare for the playoff push. We hit the reset button. Clean up the penalties and some of the mistakes. Looking forward to it. Happy for the seniors. Young guys playing for them is a special piece of a group coming together, and that’s the ultimate goal as coaches.”

The Prep faced a Roman Catholic team that had scored more than 30 points on five occasions and had allowed only four touchdowns to its three previous PCL opponents while not surrendering more than 15 points in any of its eight games overall.

Before the game, none of the Cahillites predicted a win – to do so against one of the state’s most potent powers would have been foolhardy. But they emphasized how much the program had improved and how playing for a division title is now an annual goal.

The opening moments of the game, although they served as Roman’s only highlight, supported the notion that Roman belonged in the PCL Red final.

“That’s why you play four quarters,” said Roken, referring to the Cahillites’ strong tackling and simultaneous Prep penalties that forced the Hawks into the aforementioned early third-and-33 hole. “One of key messages this week was to be poised in those moments. There’s going to highs and there’s going to be lows. We have to be calm, cool, and collected when we get into those situations. Be able to settle ourselves and execute.

“Defensively, we played awesome tonight. To shut out an explosive offense is huge.”