The Inter-Ac ended its football season in spectacular fashion. One showdown between unbeaten teams came down to an inch or so at the goal line.

Another long-time rivalry, the longest continuous one in the United States, saw a missed PAT as the difference.

Classic games, even better performances, kind of sums up this Inter-Ac season and certainly the last week of the season. There was also a common theme – skilled senior players making quite a lasting impression in their final game.

Here is a look at our final Pick Six from the last week of the season.

PICK ONE A PASSING FRENZY FOR LEAGUE CHAMPION HAVERFORD SCHOOL

The Haverford School has enjoyed a dominant season, led by a bruising running game and a tenacious defense. The passing game?

It was solid but not always called upon.

Until it mattered the most.

Haverford School visited Episcopal Academy in a game that would only determine the Inter-Ac champion. No special math needed.

Both teams took 9-0 records into the game at Episcopal Academy in the season finale, a matchup that was witnessed by an overflow crowd.

The big surprise was that the passing game resembled an aerial circus, especially compared to the previous nine games.

Gavin Wright, a 6-foot-5, 200-pound strong-armed senior, was up to the task of receiving some extra work.

Let’s just say he got a passing grade.

Knox had 12 receptions for 147 yards and three scores.

This was certainly a case of Knox being ready when his number (1) was called.

“I was waiting my turn, being patient, waiting for coach to call the plays and we were ready,” Knox said.

Then the Fords took the lead for good on Knox’s 32-yard touchdown reception when he ran by the defense and was hit in stride by Wright in the third quarter.

A 9-yard scoring pass from Wright to Knox extended the lead to 21-7 early in the fourth quarter.

Then Haverford School held on for dear life as Episcopal Academy made an impressive comeback.

The Churchmen got to within 21-19 when Nick Wolff hit TJ Cadden on a 9-yard scoring pass with 1:15 left.

Then came the two-point conversion, when Penn Charter was stopped inches from tying the score and the Fords had survived.

In this game, Haverford School’s passing game picked an opportune time to have it best showing. Wright and Knox were clearly on the same page, the result of working together with each other for so long.

“He’s awesome, we worked so hard in the off-season and we finally got a chance to show it off when the run game wasn’t working too much,” Wright said. “He’s a great player, a great teammate, and I’m so happy for him, he deserves it.” 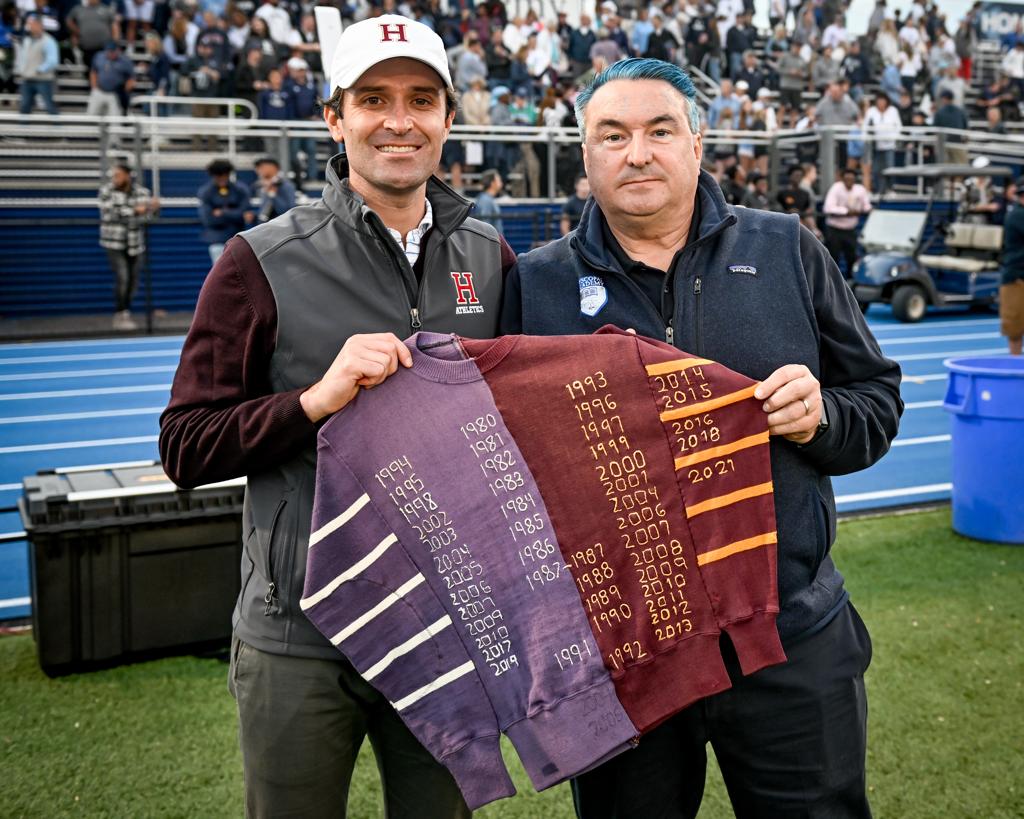 With the victory, The Haverford School claimed the rights to the Split-Sweater - PSD Photo by Mike Nance

There were plenty of other big-play performers for Haverford School.

Brosko was still a workhorse, with 124 yards rushing on 31 carries.

Imagine, being your final high school game and exiting the stage in this fashion?

“Having this happen against a football team like this and at a campus like this, it’s awesome,” Wright said. “It’s a great way to end the season.”

Not to mention a career.

It was quite a way to end a high school career for Yaahdir Nash. The 5-10, 180-pound senior running back at Malvern Prep had a farewell game to remember. He rushed for 215 yards and three touchdowns on 28 carries in a 41-14  win over visiting Springside Chestnut Hill Academy.

Not only did he have a big game, but Nash also went over the 1,000-yard mark for the season. He entered the game with 858 rushing yards this year.

One thing that helped was that the game was moved up a night to Thursday, an attempt to stay away from the rain that soaked the area on Friday.

Not only that, but the weather was unseasonably warm in the 60’s, a great night for football. Add to that was that it was Senior Night at Malvern Prep, where Nash and his classmates were honored.

“It was great, Senior Night, at home, getting to see my fellow seniors, some that didn’t play much to get playing time,” Nash said. “It was amazing.”

Like many seniors Nash wishes he could squeeze a few more games out of his high school career. He says his time at Malvern Prep was truly special.

“Four years of your life is dedicated to one thing and all of a sudden it is done,” he said. “I will miss it forever, but of course I hope to be going on to bigger and better things.”

Malvern Prep ended the season 8-2, 3-2. It shows how strong the Inter-Ac is when Malvern Prep finishes in third place. As mentioned before, the Friars’ two league losses were 6-0 to Haverford School and 14-11 to Episcopal Academy.

Nobody should forget Evan Spivey’s last game at Germantown Academy. And for those who do, they only have to look at the trophy for the game where the MVP’s names are listed.

This was the 136th meeting between the two schools, the longest continuous rivalry in the United States.

Spivey, a Coastal Carolina commit, had two receiving touchdowns and made several big plays at safety, while also returning kicks. Teammate Capers, a junior, scored the Patriots other two touchdowns on runs of 3 and 35 yards.

“The idea from the jump was to do whatever I could to help my team win,” Spivey said. “I had to leave it out there, this was my last game.”

What a game it was.

Penn Charter got to withing 28-27 with 40 seconds left on a seven-yard touchdown run by Seamus McCain.

The PAT attempt was kicked low and was blocked by Brandon Truszkowski, GA’s 6-6, 265-pound freshman, who has gotten pretty good at this type of thing. It was his fifth blocked kick of the season.

So the Patriots, who lost a 35-32 nail-biter last year to the Quakers, had come out on top in one of the most emotional rivalries, yes, in the country.

Spivey is the type of player who would show intensity in a pick-up 7-on-7 game. Imagine him in this setting, playing before a packed crowd at his home Carey Stadium.

“It was fun going to work with my brothers, one last time and we wanted to make the last one the best one,” Spivey said.

Looks like he and his teammates achieved their goal.

Also for GA, Tristan Machado threw for 212 yards and the two scores to Spivey. Freshman Jack Durkin had a key interception.

There were many other contributors, but Spivey is the one who set the tone.

“I am so happy for Evan,” GA coach Matt Dence said. “He is the most dynamic player in the league and for him to have a game like that and get his name on the MVP trophy, that is a pretty big deal.”

Dence made it a point that there will be several other Spivey highlights in the future both on and off the field.

“I said to him that this won’t be the highlight of his life, that he will do better things not just in football,” said Dence, whose team ended 7-3, 2-3. “He will go down in history for this performance and I am really proud of him.”

This season Springside Chestnut Hill Academy had many long stretches of strong football against the minefield of a schedule in the Inter-Ac.

The problem the Blue Devils faced is sustaining the play over a long period of time. What hurt SCH is its depth.

That depth would often show up in the second half of games.

That was certainly the case in SCH’s finale – a 41-10 loss at Malvern Prep.

SCH trailed just 10-0 at halftime before Malvern Prep’s depth showed up in the second half.

“It’s tough not having the depth, but you just have to keep working,” SCH coach Rick Knox said.

Junior running back Jayden Sumpter, one of the team’s chief offensive performers, was among the players sidelined by injury.

Quarterback Tommy Markey ran for two touchdowns and completed 25 of 36 for 331 yards, and tight end Danny Reagan had nine receptions for 113 yards.

Tyler Roberts led the defensive effort with 11 tackles, including four tackles for loss.

Yet there were severe costly turnovers.

So the Blue Devils end the season 4-6 overall and 0-5 in the Inter-Ac. There are many leagues in Southeastern PA, where SCH wouldn’t have gone winless, but the Inter-Ac was as strong as ever. 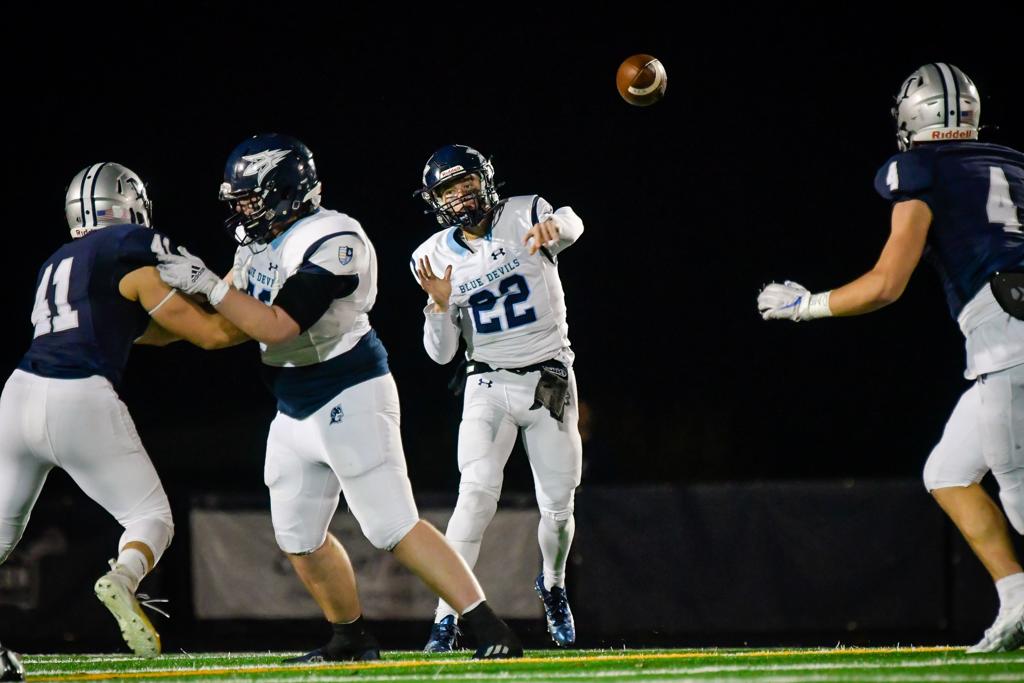 On the bright side, with such few seniors, so many players returning next season received valuable experience.

Knox says that there will be about 8-9 returning starters on both sides of the ball.

PICK FIVE: THE TOUGHEST OF LOSSES IN A CHAMPIONSHIP SHOWDOWN

The game had been over for more than 20 minutes, but the Episcopal Academy players didn’t want to leave the field.

The players were emotional, trying to console each other after a gut-wrenching 21-19 home loss to Haverford School in a game that determined the Inter-Ac championship among previously undefeated teams.

The Churchmen got to within 21-19 when Nick Wolff hit TJ Cadden on a 9-yard scoring pass with 1:15 left. Episcopal Academy then was stopped on the two-point conversion run, no more than a few inches short.

And so while the team was naturally distraught by the loss, the Churchmen ended 9-1, 4-1, quite a season especially considering how difficult the schedule was.

Yet this wasn’t a time to console the team. In time, the Churchmen will realize how much they accomplished, but those thoughts will come much later.

This one was tough to take and how could it not be?

“It was a good football game and credit to them, they made the plays,” EA coach Todd Fairlie said. “We made more mistakes and turned the ball over.”

Of course EA showed incredible resilience. Trailing 21-7 early in the fourth quarter, the Churchmen made it 21-13 on Cadden’s 90-yard kick return and then got it to 21-19 on Caden’s touchdown reception.

Cadden, a dynamic senior, also had the game’s first touchdown, a 97-yard reception from Na’rome Rayborn in the second quarter. All season and really all during his career, Cadden showed great skill and will.

Despite the disappointment, Fairlie was able to keep things clearly in perspective.

“I think it’s important that today shouldn’t define us as a team and we have so much to be proud of,” he said. “It’s a special team and a special group that should be proud of the season as a whole."

Penn Charter (5-5, 1-4) might have won just one Inter-Ac game, but two others were oh so close. One was a 16-13 loss to eventual champion Haverford School and the other came in the season finale, a 28-27 loss to Germantown Academy, as stated earlier, in the 136th continuous meeting.

When quarterback Seamus McCain scored on a fourth down 7-yard run with 40 second s left to get the Quakers within 28-27, there was optimism among the Penn Charter faithful.

The low PAT attempt was blocked and Germantown Academy had held on.

Penn Charter coach Tom Coyle said it was much more than that final PAT attempt that did in the Quakers.

“We turned the ball over three times, twice in the fourth quarter, and we just didn’t make the plays,” he said. “We didn’t get the stops on defense we needed.”

This was a game where Penn Charter went up 14-0, then came back to within a point at the end.

“Our guys always play hard,” Coyle said. “We were in a fight this game and just came up short.”