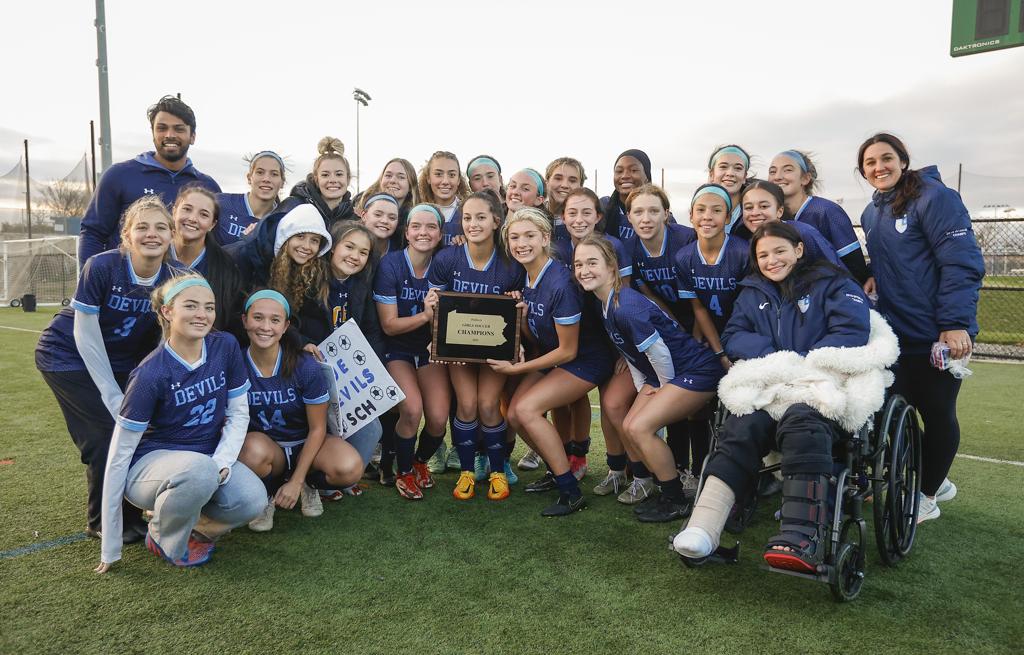 CONSHOHOCKEN, PA – This is what a championship game is supposed to look like.

To add some spice to the matchup, not that any was needed, both teams were familiar rivals. Oh, how familiar they were.

In the end, a goal by Abigail Kenkelen in the 70th minute was the difference during Springside Chestnut Hill Academy’s 1-0 win over Episcopal Academy on Wednesday in a high school game that had more of a college feel to it.

The blustery wind made the game-time temperature of 47 degrees seem much colder.

This game could have been played on a February evening in Alaska and the players wouldn’t have blinked.

Both were too preoccupied with attempting to win a championship. Each squad ignored the weather conditions at the Conshohocken Proving Grounds.

That was an apt name for the championship venue as both teams were attempting to prove all season that they were No. 1.

SCH won the battle this day and also during the Inter-Ac season, but barely so on both counts.

Yes, the Blue Devils were deserving champions, but Episcopal Academy was ever so close in this game and this season.

It’s no consolation to the Churchwomen, but during both the Inter-Ac season and in this championship game, they were able to test SCH to the absolute limit.

And give SCH credit for passing the test, accepting all challenges with the willingness of a determined champion.

The teams were as close as their records.

The SCH seniors never lost an Inter-Ac game. The Blue Devils won the Inter-Ac title in 2019. The next season there was no title during the COVID year. Then SCH picked up where it left off and won the titles in 2021 and this year.

SCH also added the PAISAA championship last year, beating another Inter-Ac school, the Academy of Notre Dame, 1-0, in the final.

What am amazing run and in hindsight, made more impressive with how much EA pushed the Blue Devils this year.

The Inter-Ac blemishes for Episcopal Academy this year?

There was a carryover from the regular season into this PAISAA final. These two teams fought through the elements to produce a back-and-forth affair, filled with individual brilliance.

Despite just one goal being scored, there was brilliance on the offensive end. There was certainly plenty of brilliance defensively and did we mention the two keepers?

SCH’s Ellie Stratz and EA’s Maya Naimoli seemed like they were in their own separate contest, to see which one could upstage the other, with one big save after another.

EA’s Naimoli, an Ohio State commit, made her best save on Kenkelen in the 33rd minute, a diving save where she extended her body past what seemed possible.

As for Stratz, she made two big saves on Kate Dente, both on shots that appeared destined for the back of the net.

There were other impressive saves for both keepers as well.

In this setting, Stratz sure picked an opportune time to play the game of her life.

This is not hyperbole. She admitted that this performance ranked No. 1 and really, who could debate it? 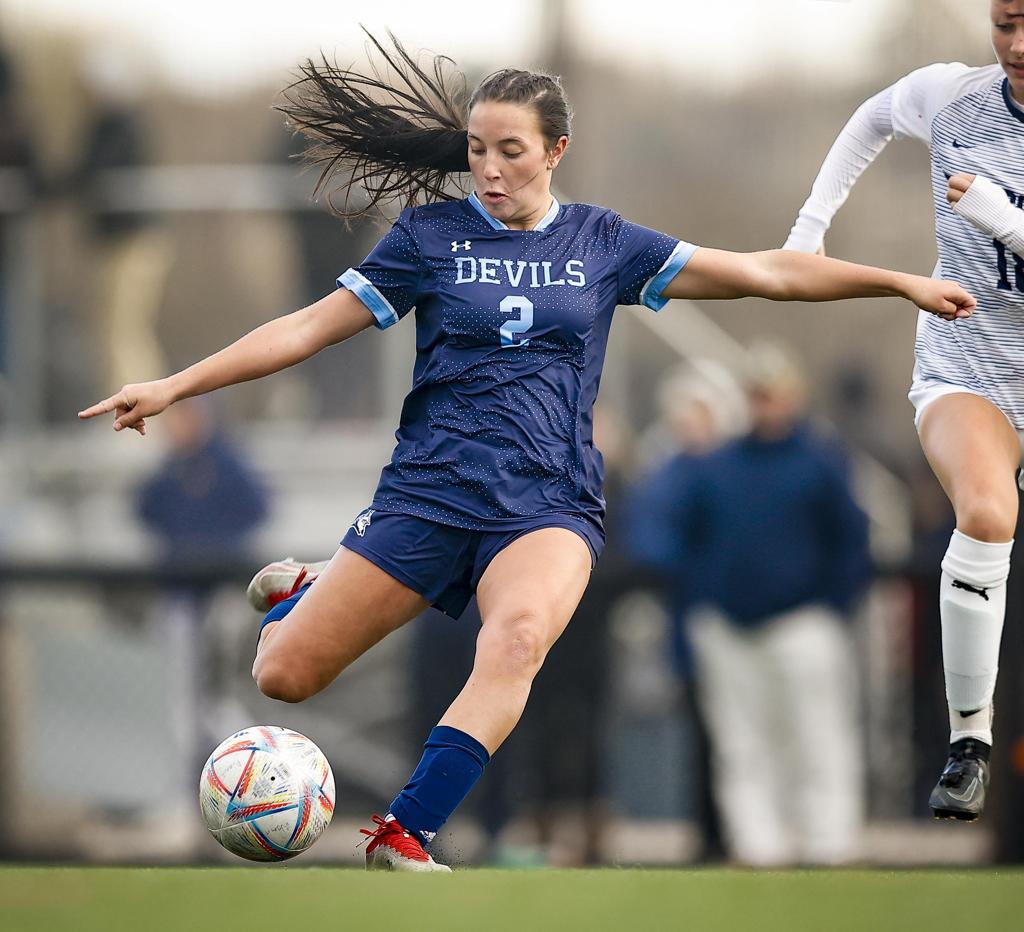 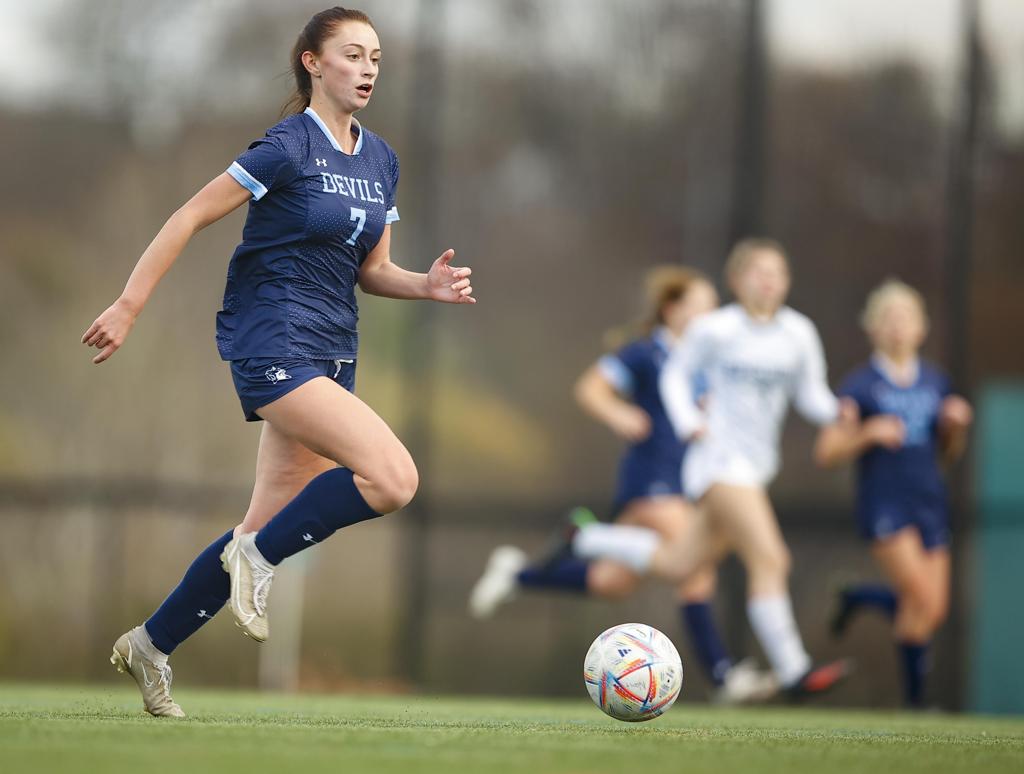 When asked if she could ever remember playing better, she didn’t have to think very long.

“I honestly don’t think so and I know it was my biggest game in my high school career, despite even last year when we won,” said Stratz, who is headed to Chestnut Hill College. “It was my last game ever and I knew I had to come up big and give it my all and I did and kept the shutout.”

Imagine playing so well in your final high school game.

What’s interesting is that several other seniors from both teams could have made the same claim, starting with Lisa McIntyre.

The SCH senior midfielder-forward appears to play with a magnet on her spikes and one on the ball, because the ball never strays far from her.

Even the wind couldn't separate McIntyre from the ball.

Time after time, she worked her way out of tight corners, to make dangerous runs. No wonder she will be attending Maryland and joining EA’s Naimoli in the All-American game to be played Dec. 10 in Panama City, Florida.

“This one was special, it’s our senior year, we came in knowing that this was our last game ever,” McIntyre said. “To do it two years in a row, it’s something special, we’ll never forget this moment.”

The defense was keyed by senior center backs Abby Fitzmaurice, who goes by Fitz, and Maia Mocharnuk.

Fitz was one of the few people who had the power get plenty of distance on free kicks into the wind.

She was also a tower of strength in the back, often backing up her teammates if an EA player found some open space, which for most of the game wasn’t readily available.

EA sophomore Maya Bright provides a trio of nightmares for any defender - speed, energy and skill. She had 16 goals and eight assists this year and the SCH plan was simple – don’t allow her to get a flying start.

For the most part, the strategy worked, but Bright is so talented that even when she doesn’t score, she opens up areas for her teammates.

This game appeared destined for a third overtime meeting but going into the wind, SCH had a different idea – why not end this thing in regulation?

Not surprisingly, McIntyre’s fingerprints were all over this goal, if not on the stat sheet. Taking a pass from Bella Brown another senior who had a big game, McIntyre sent a through ball to Alex Reilly, who then found Kenkelen in the middle of the box, about 10 yards from the goal.

“I got the ball from Alex and turned and realized I had nobody on me and shot in the far corner, placing it and not (shooting) it over,” said Kenkelen, about her eighth goal this season.

Kenkelen, who will continue her education and soccer career at Brandeis University, couldn’t envision a better conclusion to her playing days at SCH. 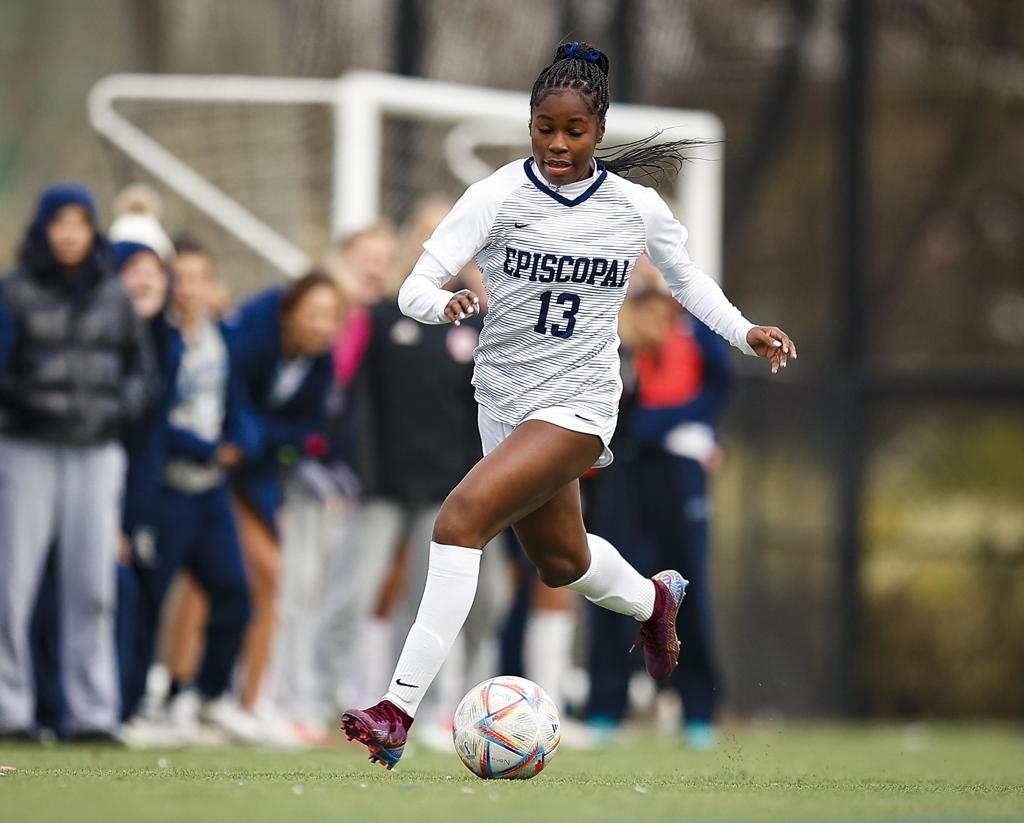 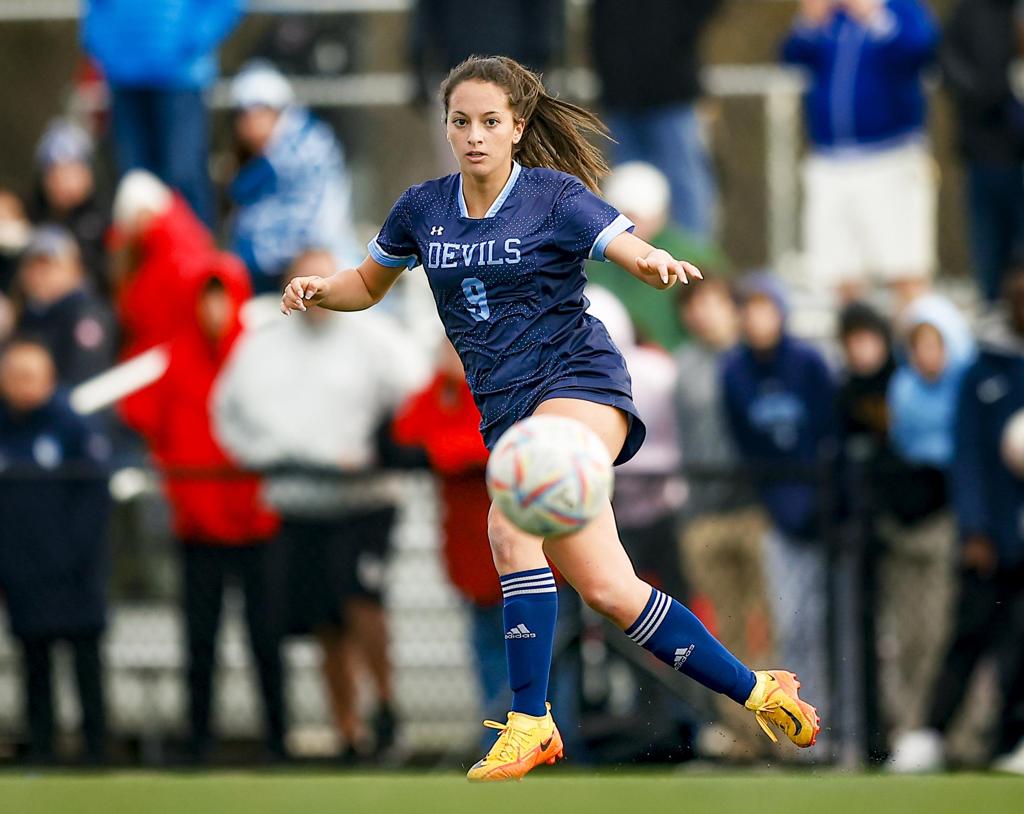 “It is incredible, I can’t even describe it and for my last game as an SCH Blue Devil, it is amazing.”

Then of course there is the other side.

EA had played its collective hearts out, actually in all three games against SCH, but especially in this one. 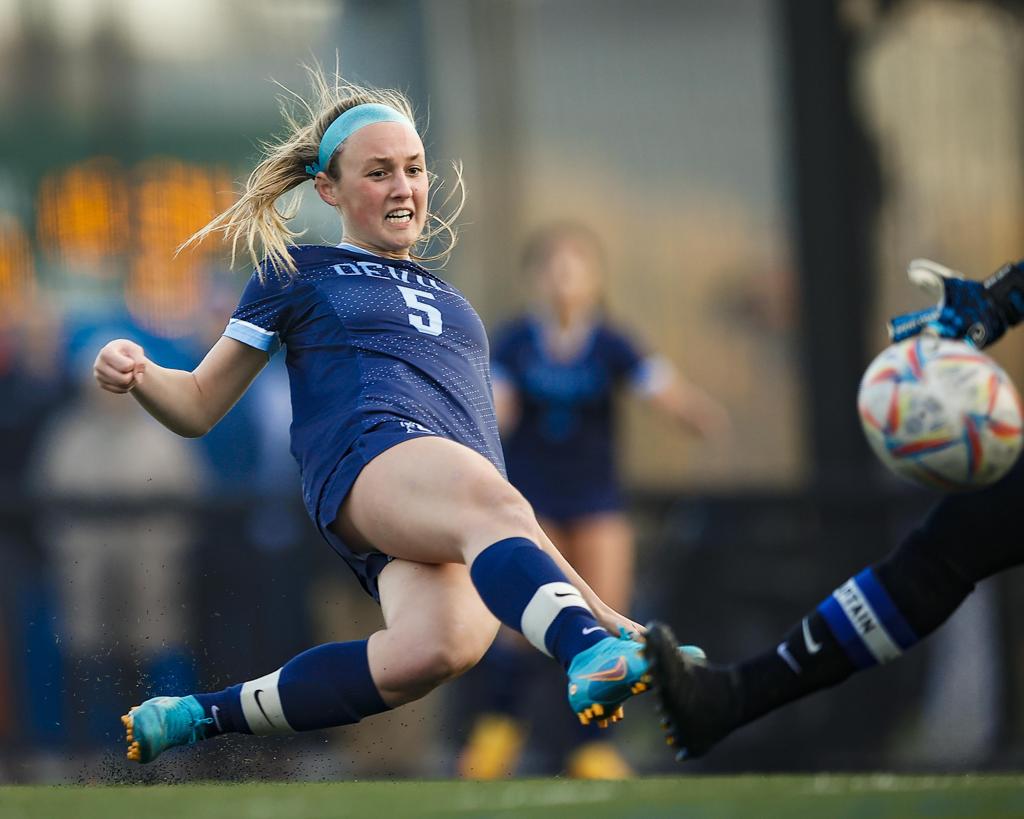 “There were a lot of good chances by both teams that happened today,” EA coach Andy Fraggos said. “We didn’t get our chance to sneak out a win against them this year, but we were happy how we performed each time.”

A person can be disappointed with a result but happy with the way a team played and that was exactly how Fraggos felt.

How could he feel any other way?

Episcopal Academy played like a champion. It just came across a group that took it a small but important notch higher.

SCH proved to be a worthy defending champ that had no intention of allowing its supremacy to slip. The Blue Devils needed every ounce of effort and resiliency to ward off a most worthy challenger.