The game was decided in the final two minutes with a terrific goal by freshman Anna Weber that capped a 4-3 victory and sent the Patriot student section into a frenzy.

The stands were packed with support for both the teams in what Patriots captain Sage Battisto called, “the most important game of the year by far.”

“Before at our team brunch all of us were extremely nervous,” Battisto added. “But I feel like once the whistle blew, we all got it together and it was a great team victory.”

There wasn’t much to cheer for during a large part of the first half. Penn Charter later threatened and got a handball in the box to set up junior Olivia Linus for a penalty shot.

A hundred Patriot fans were screaming their hearts out trying to get into Linus’ head. It didn’t phase her, as she fired a strike into the top right corner to give the Quakers an early lead heading into halftime.

“I knew where I wanted to go,” said Linus. “I actually give the goalie like snake eyes every time, I look [one way] and then shoot it the other way.”

Germantown Academy came out strong early in the second half scoring two quick goals to take the lead. Momentum seemed to be on their side. That was until Penn Charter struck back with two quick goals of their own. Linus again found the back of the net.

The Patriots have dealt with adversity before against the Quakers and knew they were good enough to stay in the fight even after trailing twice in this game.

“We played them early in the season years ago, and we're also down 2-0 and we came back from that,” said Battisto. “So, I think to us it was just repeating that same energy.”

The Patriots scored again to tie it 3-3 as time started to become scarce. The game was destined to go to overtime, and it didn’t seem to bother anyone. Fans wanted more enticing action on a historic day.

Then, off a deflection, Weber was found in stride for a breakaway game winner with 1:11 seconds left on the clock. What followed was the Patriot students mobbing the players at midfield.

“It was absolutely amazing! I had a charley horse in my leg, but I still got up and I was just jumping [in the celebration,]” said Battisto. “And that was such a great team victory.”

Even in the loss, the spirit of the day was something that was important to Linus.

“It's just special. Everyone is cheering for each other regardless win or lose the energy is not like any other game,” said Linus.

Weber had the hat-trick on the day and took home MVP honors. Senior co-captain Elizabeth Scheid tallied the other goal for GA. Seniors Mia Raven, Batisto and junior Gianna Grosso made the assists.

This special day marked the final game of the season for both teams. Germantown Academy ended the season 3-9 and Penn Charter ended at 4-8.

The historical GA/PC Day of competition ends in a tie

Summary of the Day’s Competitions courtesy of GA Athletics.

In following with the annual tradition, in result of a draw, the team that won the Competition Cup the previous year retains the trophy. The trophy will remain with William Penn Charter for another year. The Competition Cup has been awarded since 1996 to the overall winner of this historical day.

The first competition of the 2022 GA/PC rivalry was won 10 days before the actual day as the GA golf team won 7-1. That early win proved to be pivotal as the two schools split the results for the other competitions and ended the day in a 5-5 tie.

In the pool, the Patriots split matches, with the girls falling,12-2 and the boys earning a win, 12-11. Senior co-captain Finn Wentz was named MVP for the boys.

In field hockey, Germantown Academy got the 3-2 win, with senior Gracen Brant being named MVP of the game.

Both GA cross country teams fell on the day, with the boys going down 21-34 and the girls slipping 22-36.

The boys’ soccer team had many chances throughout the contest but were unable to find the back of the net. Penn Charter scored with seven minutes remaining in the game and managed to hold on for the result. Despite to outcome, Colin Leon '23 was named the MVP of the contest.

The longest prep school football rivalry in the nation came down to the final play.

Nobody should forget Evan Spivey’s last game at Germantown Academy. And for those who do, they only have to look at the trophy for the game where the MVP’s names are listed.

This was the 136th meeting between the two schools, the longest continuous rivalry in the United States.

Spivey, a Coastal Carolina commit, had two receiving touchdowns and made several big plays at safety, while also returning kicks. Teammate Capers, a junior, scored the Patriots other two touchdowns on runs of 3 and 35 yards.

“The idea from the jump was to do whatever I could to help my team win,” Spivey said. “I had to leave it out there, this was my last game.”

What a game it was.

Penn Charter got to within 28-27 with 40 seconds left on a seven-yard touchdown run by Seamus McCain.

The PAT attempt was kicked low and was blocked by Brandon Truszkowski, GA’s 6-6, 265-pound freshman, who has gotten pretty good at this type of thing. It was his fifth blocked kick of the season.

So the Patriots, who lost a 35-32 nail-biter last year to the Quakers, had come out on top in one of the most emotional rivalries, yes, in the country. 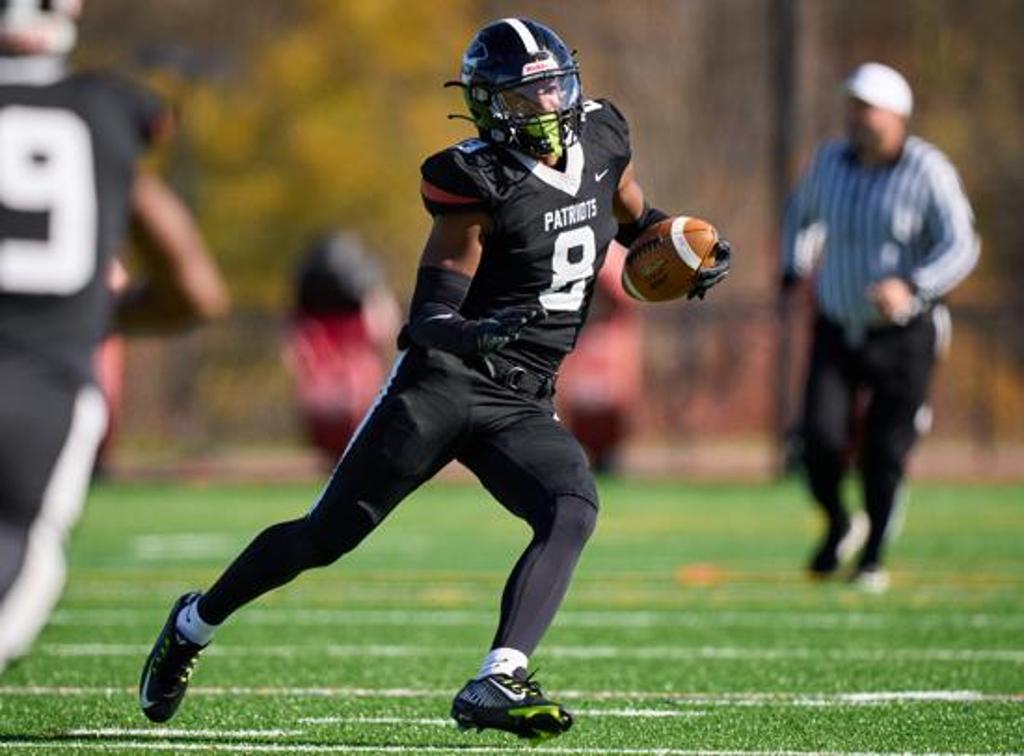 Spivey is the type of player who would show intensity in a pick-up 7-on-7 game. Imagine him in this setting, playing before a packed crowd at his home Carey Stadium.

“It was fun going to work with my brothers, one last time and we wanted to make the last one the best one,” Spivey said.

Looks like he and his teammates achieved their goal.

Also for GA, Tristan Machado threw for 212 yards and the two scores to Spivey. Freshman Jack Durkin had a key interception.

There were many other contributors, but Spivey is the one who set the tone.

“I am so happy for Evan,” GA coach Matt Dence said. “He is the most dynamic player in the league and for him to have a game like that and get his name on the MVP trophy, that is a pretty big deal.”

Dence made it a point that there will be several other Spivey highlights in the future both on and off the field.

“I said to him that this won’t be the highlight of his life, that he will do better things not just in football,” said Dence, whose team ended 7-3, 2-3. “He will go down in history for this performance and I am really proud of him.”

A great ending to an historic day.