WEST CHESTER, PA -- When former Penn Charter star Kaitlynn Haughey and ex Germantown Academy standout Kiley Kergides competed against one another during Inter-Ac high school soccer matches, little did they know that one day they would be attempting to win a college national championship together.

That’s exactly where these two West Chester University all-stars find themselves, with the additional bonus of being on the last unbeaten Division II team in the country.

The championship will be 6 p.m. ET on Saturday. Both the semifinals and final will be staged at Interbay Stadium on the campus of Seattle Pacific.

Haughey, a sophomore midfielder, and Kergides, a junior defender, have been extremely instrumental in the Golden Rams’ success.

This season Haughey was named the Pennsylvania State Athletic Conference (PSAC) East Division Offensive Player of the Year, a season after being named Rookie of the Year.  Haughey has eight goals and six assists, but that only begins to tell the overall contribution she has made this season.

“She does a lot of things on the field that statistics won’t hold,” said West Chester coach Betty Ann Kempf Townsley, who has guided the Golden Rams to the NCAA tournament in each of her 16 seasons at West Chester. “She’s got that drive in her that not many people have.” 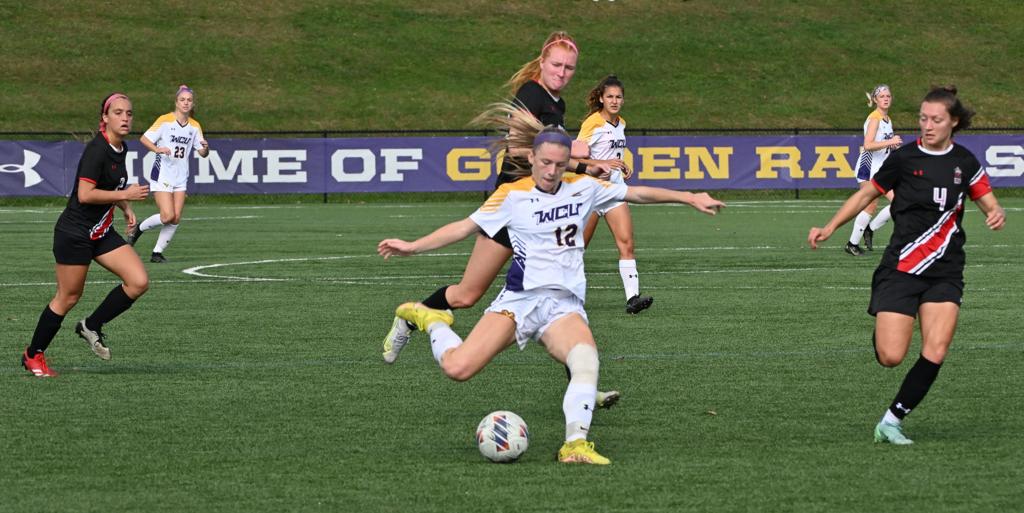 Simply put, Haughey has been both an offensive and defensive catalyst.

“When push comes to shove and we need somebody to catapult us into another dimension, she does it in her own way,” Kempf Townsley said. “She doesn’t scream and yell, but she just has a drive that is so competitive and a competitive edge that just lifts the whole team.”

Kergides leads all position players on West Chester with 1,996 minutes played. Like Haughey, she was named a first-team all-PSAC East Division selection.

“Kiley just kind of calms things down for us in the back,” Kempf Townsley said. “She has become one of the best defenders in our conference and she just continues to grow and is playing with a tremendous amount of confidence right now.”

West Chester punched its ticket to the Final Four with a 2-1 overtime win over Franklin Pierce.

Trailing 1-0, West Chester got the equalizer in the 58th minute on goal by Haughey, with the assist by Kergides.

Haughey deposited a rebound after Kergides sent a free kick on goal from just outside the box.

The two know each other’s games well since their time competing during their Inter-Ac days.

“In high school I played midfield and Kait and I battled a lot which is funny and sometimes to this day we talk about it,” Kergides said. “The Germantown Academy-Penn Charter rivalry is a big one and we talk about the many memories about playing against each other.”

The two have plenty of time to discuss matters since they are also roommates.

Kergides is glad that the only time she now has to go against Haughey is in practice.

“She is a great player and she has made me better as a defender, playing against her,” Kergides said. “It really challenges me and it is good for both of us to go against each other.”

Kergides is so accomplished at free kicks, which helps explain why she has three goals and two assists while playing defense.

Her biggest goal came in the Atlantic Regional final, a 1-0 win over Kutztown, that advanced the Golden Rams to their quarterfinal game against Franklin Pierce.

The goal was scored in the 89th minute on a free kick from just outside the box.

All tied up in Albany after this rebound goal by Haughey! pic.twitter.com/tsy6TEyYA3

WSOC: The game-winner from Kiley Kergides in the final minute to give West Chester the Atlantic Region Championship!#ramsup pic.twitter.com/slAjnAaQlz

“As great as it is to score a game-winner, I have to give credit to my teammates as they do so much, and none of this would be possible without them,” Kergides said.

Playing in the Final Four is a dream come true for the two former Inter-Ac stars.

“It’s been exciting,” Haughey said. “I don’t think any of us would have thought the season would go as well as it did, so this is definitely awesome.”

Added Kergides: “We’re all excited and think this is something you always dream of as a little girl playing soccer. It is kind of like a dream come true and your dream is becoming a reality now.” 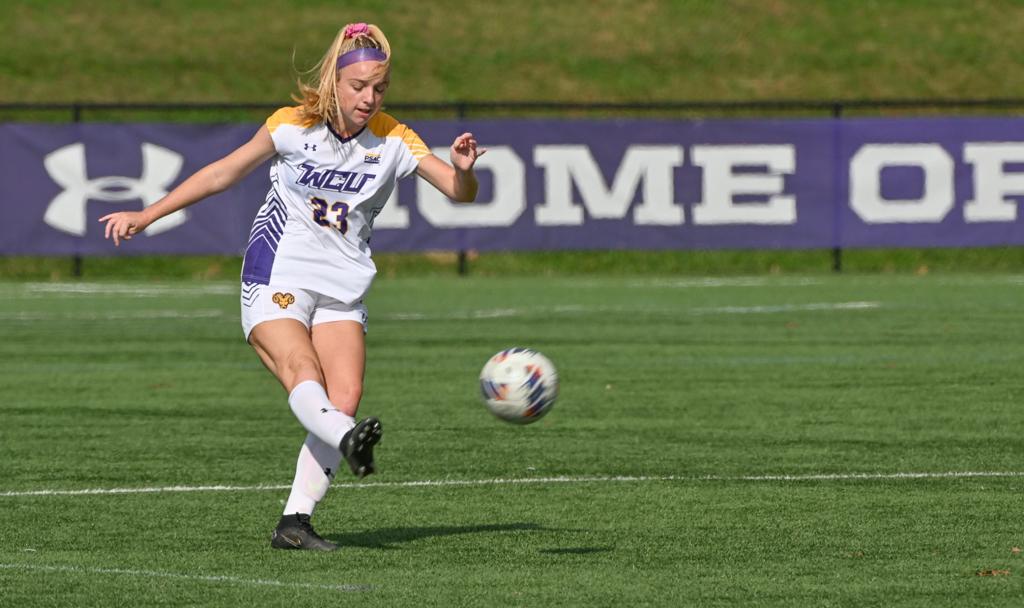 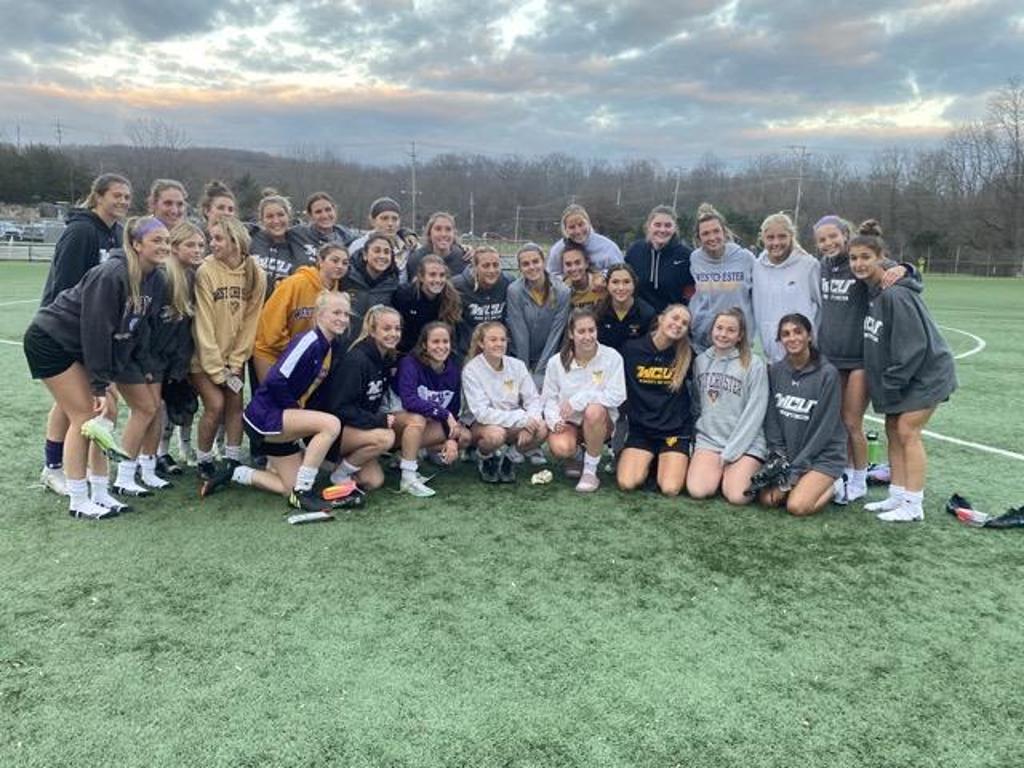 Haughey and Kergides are two of five players on the West Chester team that are either from the Inter-Ac or the Philadelphia Catholic League.

The others are junior Anotnia Linus from Penn Charter, freshman Olivia Myers of Springside Chestnut Hill Academy and the one Catholic League player, sophomore Emily Deluisi from Archbishop Ryan.

Deluisi has appeared in 15 games and has three goals. Linus has made nine appearances with one goal and Myers has made one appearance.

Kempf Townsley, herself is a former Catholic League product, having attended Cardinal Dougherty, which has since closed.

She likes recruiting from both leagues.

“The Inter-Ac has great, competitive soccer,” Kempf Townsley said. “They are also great students, they are real student athletes.”

“The Catholic League is really competitive, but you don’t have the number of schools you used to with a lot of them closed down,” she said.

West Chester is competing in the Final Four for the first time since 2006. The Golden Rams are seeking their first national title.

“It is exciting and amazing to think, two more games and the national championship,” Haughey said. “We’re all keeping our fingers crossed.”