The Neumann-Goretti Saints are heading to the PIAA 3A state championship for the first time in school history.

PHILADELPHIA – It’s only appropriate that Neumann-Goretti was compared to Philadelphia’s most famous fictional sports figure after earning the first state championship berth in school history.

This was clearly a performance that Rocky Balboa could identify with.

A Philadelphia underdog rising to the top, overcoming adversity, pulling out the most improbable of victories.

Neumann-Goretti’s 20-17 state 3A semifinal win over Wyomissing at the Germantown Super Site was a tribute to the fight in the Saints and the fictional fighter from Philly.

The Saints won on a last-second comeback without their best player who was ejected earlier in the game.

And time wasn’t exactly on their side.

Oh, and did we mention they were the first team to beat Wyomissing this year as the Spartans ended their season 13-1.

That was also part of the plot.

“We’ve got kids from Philly and Philly guys go through adversity, it’s almost like Rocky,” Neumann-Goretti coach Albie Crosby said. “You go through stuff, and play.” 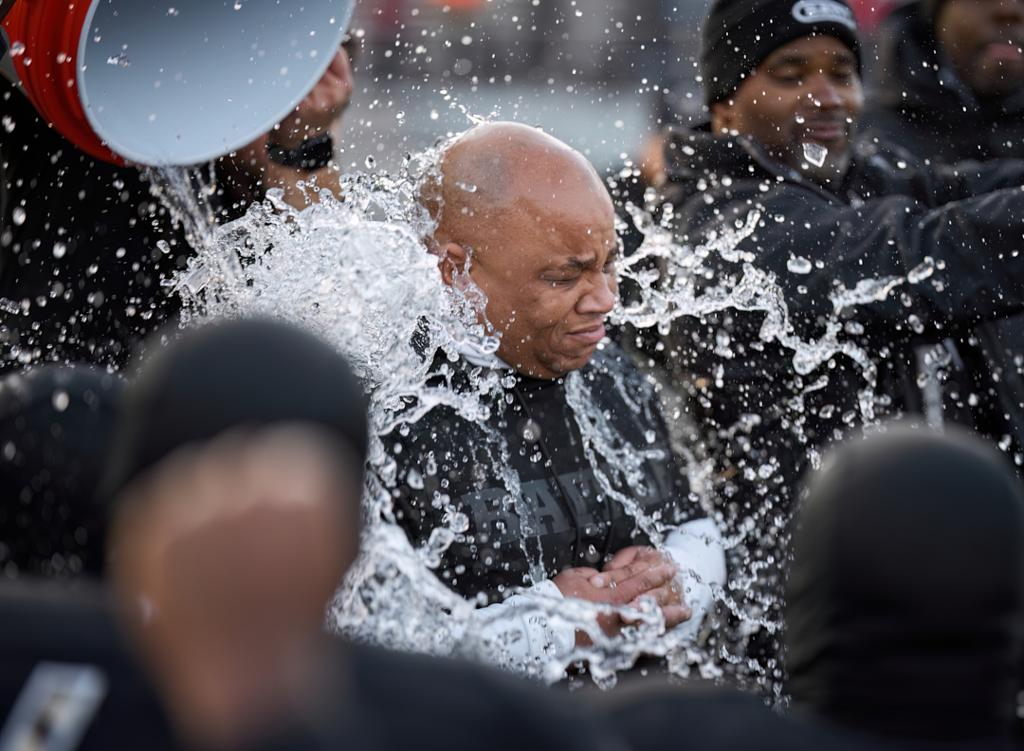 In addition, the Saints may have had some help from above.

It was just on Nov. 12 that Crosby’s mother, Brenda Brown passed away. In another bit of irony, Saturday, Dec. 3, the day of the game, was also Brenda’s birthday.

“The kids kind of rallied around me, they had stickers on the back of their helmets for mom,” Crosby said. “You go down to Wyomissing with 34 seconds to go, hopefully mom kind of helped us out.”

Before getting to the final 34 seconds, back track a few minutes, when all the craziness began.

Neumann-Goretti took its first lead of the game when fullback Kyreese Bradley bulled over from the 2-yard line, giving the Saints a 14-10 advantage with just 2:10 left.

Wyomissing stormed back, completing a 12-play, 80-yard drive with a 10-yard scoring pass from Ben Zechman to Charlie McIntyre for a 17-14 lead with just 34 seconds left.

What possibly could a high school team do in 34 seconds?

A lot of time?

First off, Khari Reid returned the bouncing kickoff 20 yards to the Saints’ 44.

Then Wharton hit Denim Smith for eight yards, but a false start by the Saints made it 2nd-and-7 from their own 47.

Wharton scrambled for nine yards to Wyomissing 44 with 16 seconds left.

“Usually in that set the outside receiver runs a five (yards) and in and the slot runs a corner route,” Crosby said. “This time we changed it a little bit and sent the slot on a strong post and then back to the corner and that his how he was able to get open.”

“I was watching the safety, honestly, it was all that open space, I was free,” Major said. “I watched the safety, gave it a hard post and as soon as I saw (him) bend down in it, I knew I had to cross the space a little bit, then once when he bent down on it, I went right back to the corner.”

The other part is that Wharton had to connect with him.

Major caught it at about the 12-yard line, but had to keep his balance. He came close to running out of bounds, and tip-toed into the end zone. 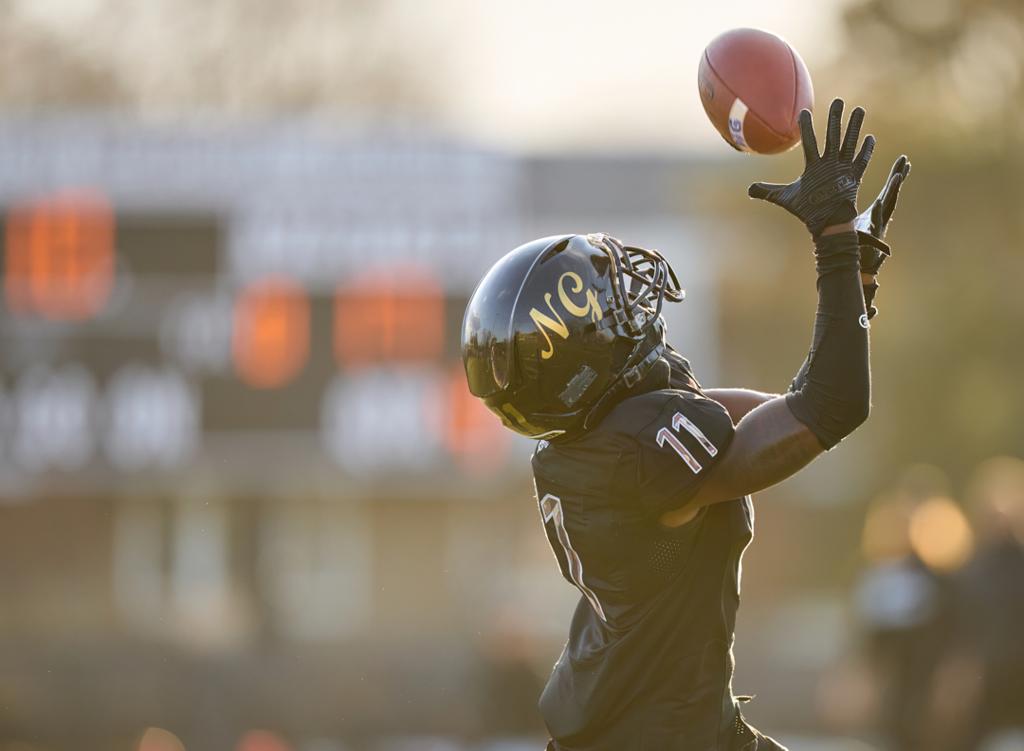 He was so wide open that some quarterbacks may have gotten too anxious, but not Wharton. He said there was no fear of over-throwing his wide-open, wide receiver.

As it turned out, Wharton was right 34 seconds was a long time.

After a short return on the ensuing kickoff that took seven of the eight seconds , the game ended when Bradley made a tackle at around the Neumann-Goretti 32-yard line following a completed pass.

Next stop – the state final.

What made the comeback even more amazing is that Neumann-Goretti had to play the fourth quarter without its go-to guy, running back-defensive back Shawn Battle, a Boston College commit and one of the top players in the state. 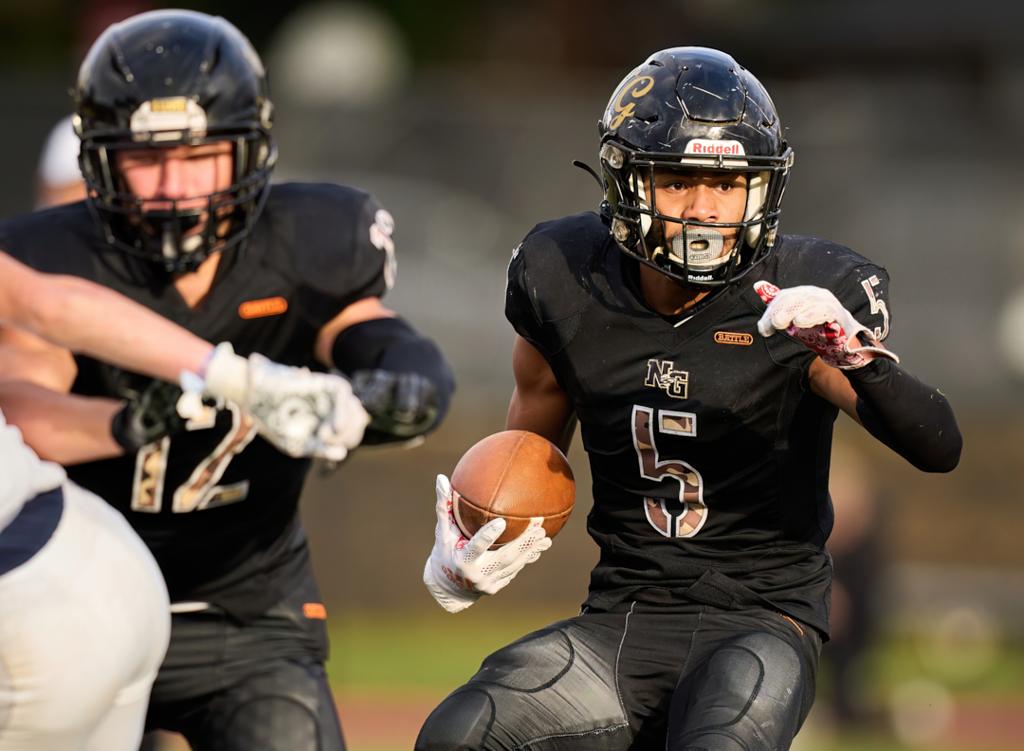 At the end of the third quarter, following a 4-yard gain, Battle was ejected after getting in a brief skirmish with one of the Wyomissing players.

“When he went and got tackled, a guy grabbed his private area and he went to push the guy back,” Crosby said. “The (Wyomissing) kid actually admitted he grabbed him in the private area, but it was by accident. So that is what happened. You’ve got to respect the rule.”

Two of the game officials that Philadelphia Sports Digest talked to after the contest said that an ejected player would have to sit out the next game.

Battle has been such a pivotal player all year and this game was no exception He rushed for 188 yards on 20 carries and a score.

Wyomissing took a 10-0 lead on a 6-yard run by Drew Eisenhower and a 20-yard field goal by Ian Levering, but Battle burst 52-yards for a score to cut the margin to 10-6 with 4:26 left in the second quarter and Samuel Hobbs’ conversion run made it 10-8.

It would stay that way until final frantic minutes of a game that saw three touchdowns in the final 2:10.

Wyomissing’s Bob Wolfrum, a coaching legend in the state, came away highly impressed with the Saints.

“I thought they really hammered us all day long, they out played us,” said Wolfrum who had a career 350-86-1 record. “We were just hanging on all day….They out-physical-ed us and we really had nothing we could call our own all day long.”

Now it’s on to the state final, against a 12-2 Belle Vernon team.

Is there another improbable script left for the Saints?

Neumann-Goretti vs. Wyomissing - PIAA 3A Gallery by James Quinn for PSD

Maybe for good measure, the team could stage a workout at the art museum, running the steps, like the Philly favorite they impersonated during their madcap victory.