PHILA. --The Saint Louis Billikens topped Saint Joseph's 83-78, in an incredibly back and forth game to open up Atlantic 10 play at Hagan Arena.

The start of Atlantic 10 play wasn’t easy on the Hawks as St. Louis was ranked second in the entire conference in the preseason rankings. The Hawks on the other hand were ranked 13th.

These rankings meant very little on Saturday - Here’s why:

Cameron Brown: The only player that has been in the program for all four years continued his impressive season against St. Louis. His stroke from three is starting to change from an early season hot streak, into a legitimate consistency. Brown went 5-9 from three-point land to increase his season average to 46 percent from beyond the arc. That's the 19th best in the entire country. He scored 17 total points in the conference opener.

Yuri Collins: Collins is the Billikens junior guard and reigning All-Atlantic 10 first-team selection. He’s the Billikens leading scorer but scored three points with his first and only field goal coming at 3:20 left in the second half. This helped keep St. Joe’s in the game. It was ultimately Collins’ facilitating that pushed the Billikens over the hump. But this was expected considering he leads the country in assists.

“He just kind of cuts you 1,000 different ways over the course of 40 minutes,” said Hawks head coach Billy Lange. “I’m proud of the effort that we gave [against Collins], I just wish we would have done a little bit better, transition defense I thought hurt us the most.”

Grit: This game was emotional. It all started with Billikens center Jake Forrester shoving Erik Reynolds II to the ground to get a rebound. The ball ultimately kicked off his foot to go out of bounds, but the play wasn’t called a foul even though it left Reynolds on the ground for a solid minute. Lange didn’t hold anything back when arguing with the refs on that call. This play was one of many that left Lange having a disagreement with officials. 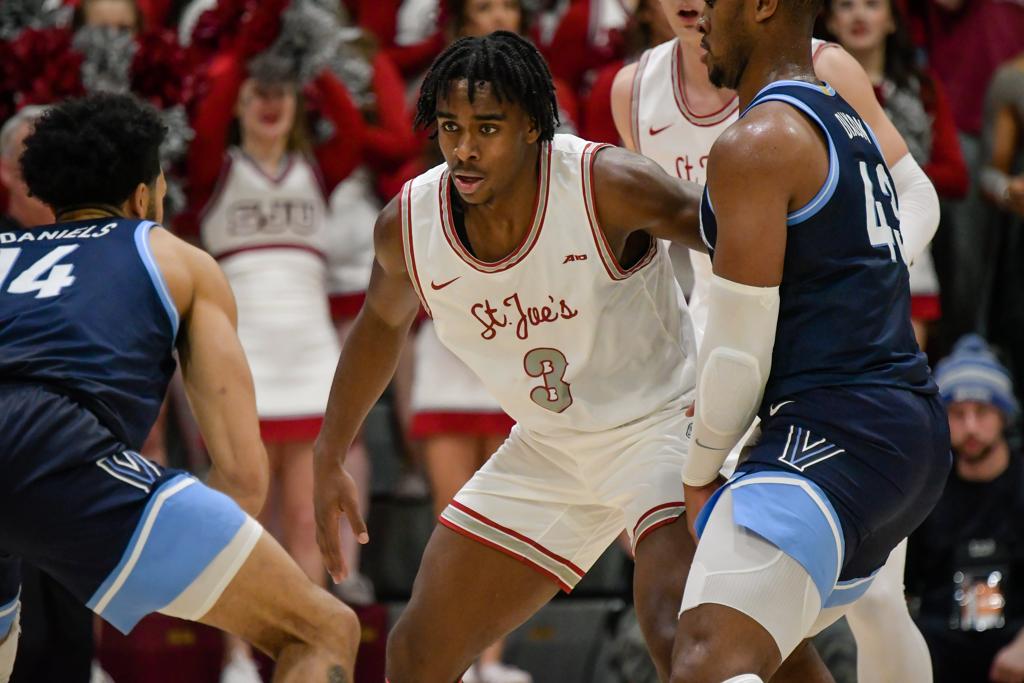 “I thought we should have been at the line way more than we were,” said Lange. “The big shots that we take when defenders go underneath us… The officials have to adjust, that has to change.”

Old school basketball: The second half was played in the paint. Eventually, the officiating did adjust as Lange urged and more fouls were called even if most were in favor of the Billikens. St. Louis used this to their advantage by forcing the Hawks to play more paint defense than they probably wanted. And the Billikens wanted the Hawks to play their offense in the paint as well and were okay being extra physical since St. Joe’s shot 9-17 from the line.

All in all, the second half was quite possibly the most evenly matched half of basketball all season. The Hawks and Billikens traded baskets equally as the Hawks trailed by either three or seven for the entire second half until 37 seconds left, when a Jake Forrester fast break dunk sealed the deal.

St. Joe’s had their chance to break this perpetual trading of baskets. Three straight open looks from three rimmed out for the Hawks down the stretch. Lynn Greer III then missed a free throw and a heavily contested shot leading to Forrester’s dunk. Just like that, 39 minutes of hard work didn’t result in a win.

Greer added 11 points to the board and Reynolds led St. Joe's with 18 points.

Hawk fans can look at this game in one of two ways...a moral victory hanging around against a team ranked second in the preseason poll, or, another example of St. Joe’s not being able to finish a game they were capable of winning. This is something that plagued the Hawks last season. Both can be true. But as always, Lange stays locked in on the process.

“We haven’t put a timetable, or a calendar, or a stopwatch on the transition that took place a few years ago,” said Lange. “You come out of [this game] and you learn, and I don’t want [the players] to be discouraged. But at the same point, there are no moral victories.”

Well, it doesn’t get easier quite yet for the Hawks, as they travel to Dayton for tomorrow's matchup.