La’Keisha Sutton is in her second year as head coach of George School, guiding one of the area’s youngest teams. There are few coaches who have better playing credentials as Sutton.

She was an All-state player at Trenton Catholic Academy, where she graduated in 2008. She scored 1,990 career points at TCA.

Then she played for Philadelphia’s own Dawn Staley at the University of South Carolina.

Sutton scored 1,299 career points and had 357 assists and became the 11th player in school history to record more score at least 1,000 points and record 300 assists.

During her senior year in 2012, she was named second-team All-SEC and to the All-Defensive Team by the league coaches. That season Sutton was a standout on Staley’s first NCAA Tournament team at South Carolina. The Gamecocks advanced to the Sweet 16 before falling to Stanford.

Sutton graduated with a bachelor’s degree in Broadcast Journalism.

She then played professionally overseas in places such as Taiwan, Ecuador, Germany, Finland and Bulgaria.

If you think her passport got a good workout, it was like kids’ stuff compared to her final job as a basketball player. From 2018-2020 Sutton was a member of the Harlem Globetrotters, one of four females, along with 40 males.

Her stage name was an appropriate one – Swish.

With the Globetrotters, she got to see all 50 states, plus countries such as Australia, New Zealand and Italy to name a few. She lists New Zealand as her favorite. 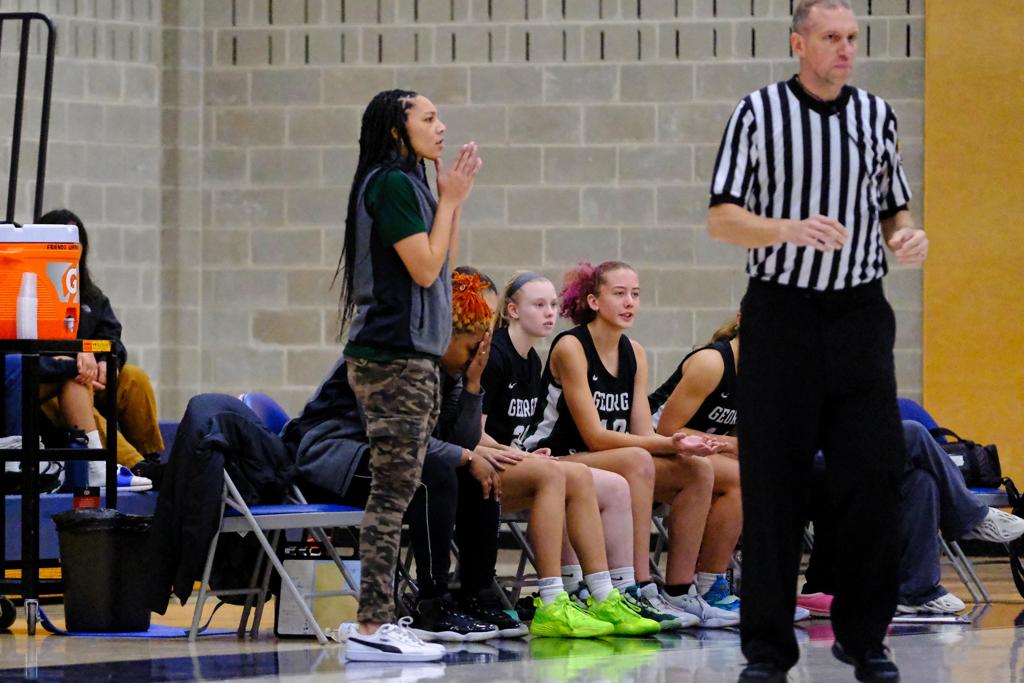 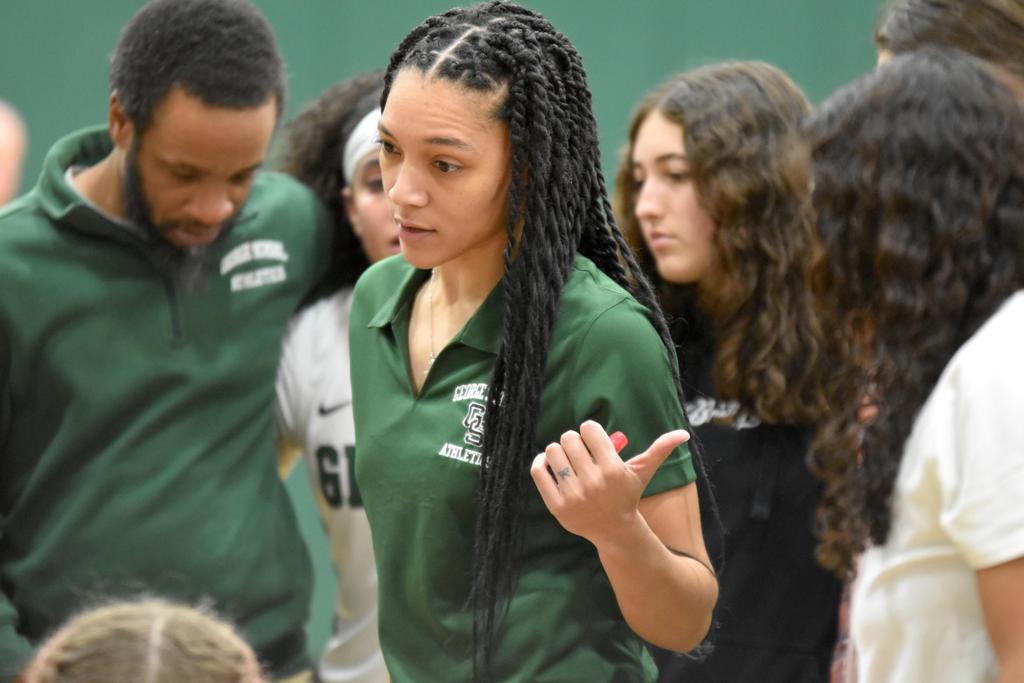 Sutton would have played longer but stopped when the pandemic hit in March of 2020.

“Once the pandemic hit, I wasn’t comfortable going on tour,” she said. “But I loved being with the Globetrotters.”

As to how she got to coach, it came from training players at the Fan Favorite Club in Hamilton, Mercer County, NJ. Sutton founded the club and is the owner.

She got to train some of the George School players there and word got around about her knowledge of the game. She was asked if she would be interested in coaching and accepted the position last season.

“The athletic director Kurt Ruch sold me on building the program,” she said.

Sutton is also a motivational speaker, which helps in coaching. She can not only design the x’s and o’s, but knows what it takes to motivate others. Most of all, she has really taken to coaching.

“I love it,” she said. “It’s great to work with so many great people.”

Sutton and the team have been doing good work this year. The Cougars are 10-9, 3-2 in the Friends League.

The Cougars have played a tough non-league schedule, but it could pay dividends during the postseason playoffs.

GEORGE SCHOOL JUNIOR SOPHIA MARTINEZ TALKS ABOUT TEAM'S SECRETS OF SUCCESS ON AND OFF THE COURT. VIDEO/ MARK ZIMMARO FOR PSD

Game of the Week

On Tuesday Friends' Central held on for a 51-48 win over host Shipley in a game that wasn’t decided until the Gators half-court shot at the buzzer hit off the rim.

“There were things we could have done better, but we got the winner,” said Friends' Central coach Vinny Simpson, whose team improved to 4-0 in the Friends League.

“It was a great game that went down to the buzzer,” said Shipley first-year coach Ellen Bair, whose team fell to 3-1 in the Friends League. “I thought everybody played well for us.”

Abington Friends was led by junior guard Sydney Johnson who had 19 points and junior forward Sakinah Abdus-Salaam, with 14. Despite the loss, there have been some bright moments for his young Abington Friends team, now 5-9, 1-2.

Wade continues to carry a big load for ANC

Xola Wade, a 5-6 junior, has been doing a little bit of everything for Academy New Church. At this point she is receiving Division III attention, according to coach Rashim Lancit.

“I am trying to get coaches to see her, because if they do, they will like what they see,” Lancit said.

Wade is averaging more than 16 points per game, but she is much more than just a scorer.

“What she is doing is amazing because teams are doing all they can to try to stop her,” Lancit said. “She is carrying a major load and doing major things.”

Wade is a versatile combo guard, but for ANC she has had to run the point.

“She sets everything up is a smart player,” Lancit said. “She can be a true point guard, but we also need her to score.
The injuries have mounted for the Lions, which has made Wade’s performance that much more impressive.

“Her sister, sophomore starting power forward Omega Wade, suffered a torn Achilles and is out. Freshman Jayda Mayo, a pure lefthanded shooting point guard broke her leg in the fall and is just coming back.

So, for now, Wade will continue to be looked on to carry the offense for the Lions. 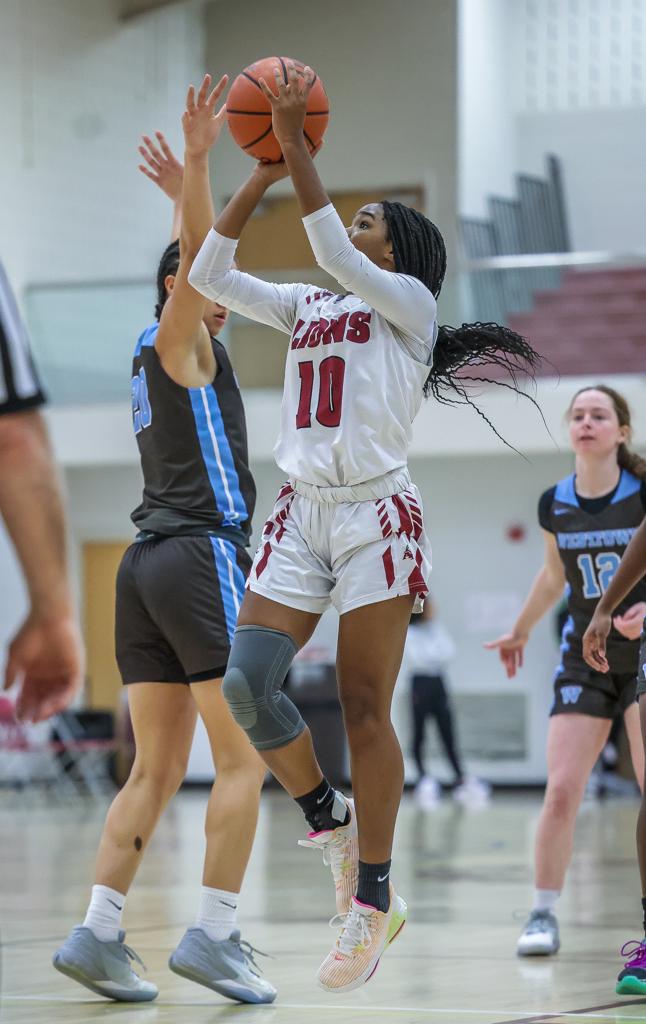 ACADEMY OF THE NEW CHURCH'S XOLA WADE IN GAME VS. WESTTOWN. PHOTO BY DONNA ECKERT FOR PSD

Senior Lucy Rupertus, who has provided outstanding leadership for Friends Select, led the Falcons with 11 points in the above-mentioned loss to Academy New Church.

Friends Select won a defensive struggle in a 28-15 non-league win over Phil Mont Christian. Rupertus had 10 points to lead the way while sophomores Daphne Klose and Sophia Le each scored five.

In a convincing win over Academy New Church, Westtown senior Grace Sundback reached a milestone when she scored her 1,000th career point.

In a 60-29 win over Busche Academy of New Hampshire, junior Zahra King had 23 points. Westtown showed its depth by having nine players score.

Westtown, the two-time defending Friends League champion, has yet to be tested in league play, winning its first four games in convincing fashion. 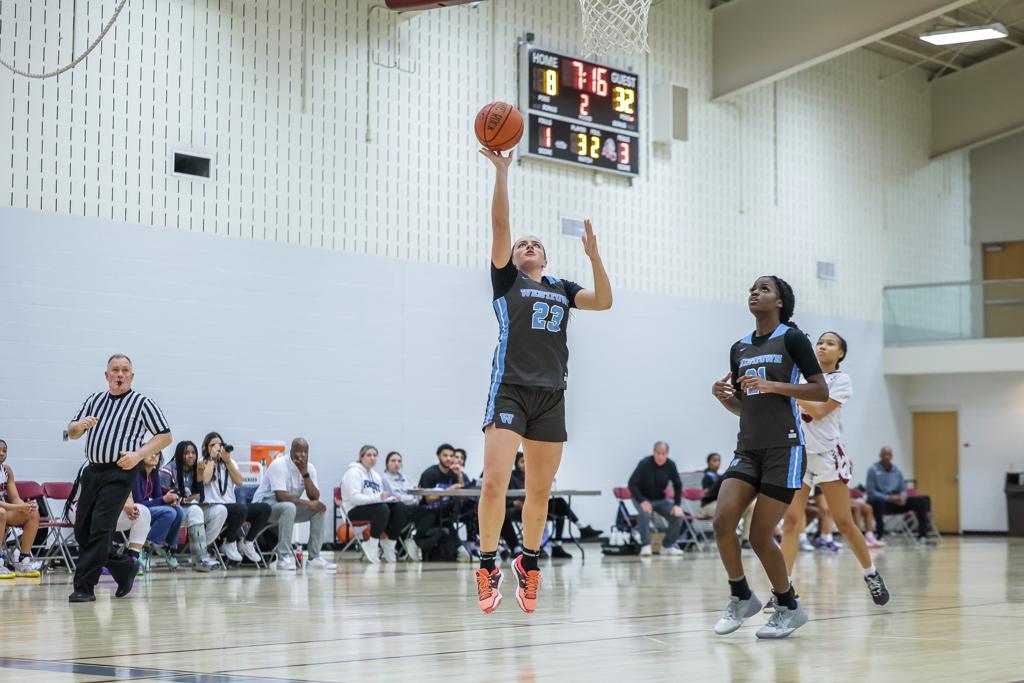 On Friday, Westtown hosts Friends' Central in a 5:30 p.m. meeting between the last two teams with unbeaten Friends League records.