COLLEGE BASKETBALL: SJU’s Rollercoaster Season Continues With a Loss Against Duquesne and Wins Against Loyola Chicago and La Salle

Backtracking to Wednesday, Jan. 13, St. Joe’s lost their fourth straight conference game on at the hands of Duquesne, 92-80.

Hawks fans went through an emotional roller coaster. There was a lot to cheer for on offense, but even more to complain about on defense. Duquesne shot 10 of 13 from deep in the first half to put up a staggering 60 first half points. The zone that gave Villanova some early troubles had no effect on the Dukes.

Lange is referring to a bunch of transfers that now fill Duquesne’s roster. The one that stood out on Wednesday night was R.J Gunn, who transferred from Lenoir Rhyne in 2021, but sat out last season because of an ankle injury. Gunn shot 80 percent on the game along with a perfect 4-4 from deep in the first half.

The Hawks actually played well on offense in the first half shooting over 50 percent and being within 2 rebounds of Duquesne. Yet every big play for the Hawks was met with disappointment as Duquesne would go down the other end and practically not miss from three. 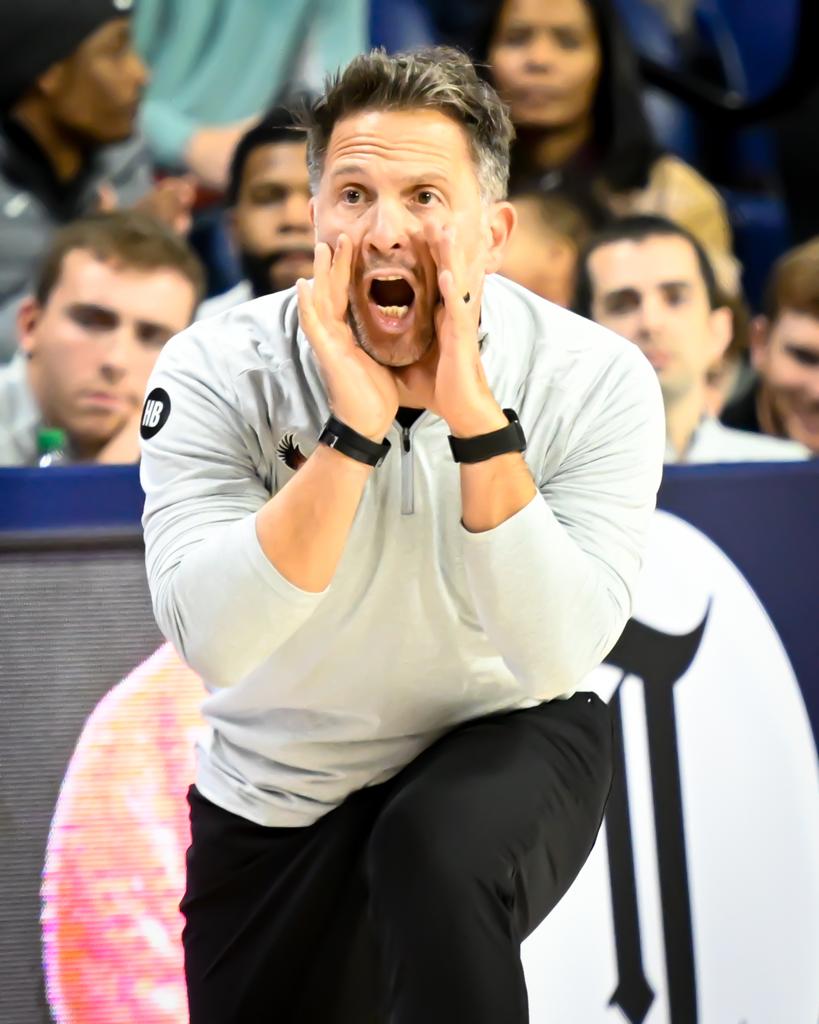 Cameron Brown saw his name climb even higher on the country’s 3-point percentage list as he is now sitting at the 21st spot in the nation. Ejike Obinna saw a bump in minutes and contributed in the paint with a season high 14 points. More often this season, Lange has gone with smaller lineups, but on Wednesday he needed size and Obinna delivered.

The second half told a completely different story for both teams. Duquesne cooled down from three and were out-rebounded by the Hawks. They gave St. Joe’s chances to come back, but the Hawks didn’t take the opportunity.

Unforced turnovers halted any momentum or life that Hagan Arena was trying to cling on to in the second half.

Lynn Greer III had a tough night with 6 turnovers while going 1-5 from the field. One of those turnovers included a behind the back move where Greer lost the ball in the backcourt. Another came from a long distance pass that wasn’t close to the target and went out of bounds.

Decision making down the stretch has been an issue for Greer this season. But there have been games where Greer has shown he can be a high level facilitator, cue the Hawks next outing vs. Loyola Chicago.

“He’s been trending in the right way with his passing. But ultimately as point guard, the decision making [is most important,]” said Lange. “The reality of it is Lynn has got a lot of things he does really well. And so we try to and we are making sure that he focuses on doing the things that he can do at a high level… and not let the things that he’s developing drag that thing down.”

Next up, the Hawks faced Loyola Chicago on Saturday, Jan. 14, an Atlantic 10 newcomer. The Ramblers are currently 0-6 in conference play. This was a very important game for St. Joe’s, as the Hawks needed to turn things around.

Greer III and Kacper Klaczek each scored 17 points to lead the Hawks to an impressive 86-55 victory in front of their fans in the Hagan Arena.

It was a career-night for Greer III, as the sophomore notched five three-pointers. He also finished with six rebounds, five assists and three steals.

To cap the week off, the Hawks traveled across town to play Big 5 rival, La Salle. The Hawks were able to leave the Tom Gola Arena victorious, securing another Big 5 and A-10 victory, 71-59. SJU jumped out to an early 12-0 lead, which was too much for the Explorers to overcome.

The Hawks shot 59 percent from the field in the first half, leading to a 39-27 score heading into the locker room.

Brown and Erik Reynolds II combined for 39 points, and this game marked Brown’s fifth 20-point game of the season.

Tomorrow afternoon at 1 p.m., the Hawk’s hope to continue their momentum as the team hosts Massachusetts.