Hawks stave off the Tide led by their junior big man

DEVON-When players like Tristen Guillouette transition to the college game, their entire skillset is basically remade when they arrive on campus.

Big men at the college level are being tutored on how to be comfortable with the basketball out on the perimeter and encouraged to extend their shooting range well behind the three-point line. At 6-foot-9, Guillouette is generally the biggest guy on the court but players at his size have gravitated to a more versatile role if they want to be effective at the collegiate level and potentially play professionally. It’s always difficult to scout how a big man’s game will translate to the next level but at the high school level, a player with the size and ability of the St. Joe’s Prep junior forward is coveted and can change the outlook of the game in more ways than one.

With Devon Prep trailing 49-48 with four seconds remaining, Guillouette came off the bench to deny a pass entering the paint and to keep the Tide’s forwards from getting an easy look. Lucas Orchard inbounded the ball from underneath basket and found Ty Mishock, who took a one-dribble pull-up from just inside the arc and missed but on the weak side Zane Conlon got a hand on what looked like a clean look but the length of Guillouette forced the 6-4 sophomore to attempt a quick tip-in that bounced off the back of the rim.

Matt Gorman corralled the rebound to secure the Hawks victory and left the Tide exasperated. For this classic big man, head coach Jason Harrigan told him his assignment prior to checking in, and while his role was simple, he achieved what was asked of him.

“He told me to protect the basket and finish the game out,” Guillouette said. “I tried to give them no good looks at the rim whether it be with a good contest or potentially fouling so they couldn’t get anything at the end of the game.”

The Hawks took the lead with 47.3 seconds as Jalen Harper, who earned an offer from Drexel after Dragons head coach Zach Spiker was on-hand to watch, recorded a steal and found Gorman for an easy finish. That layup sucked a lot of life out of the Devon Prep (9-6, 2-4 Philadelphia Catholic League) crowd when only a minute earlier Mishock, who missed his first eight shots of the night, sank his only field goal on a corner three to give the Tide a slim 48-47 advantage. Guillouette knew that a game like this a year ago, St. Joe’s Prep (11-2, 5-1) would’ve succumbed to the pressure and not finish as it did, but these Hawks have gained valuable experience that has translated into wins. 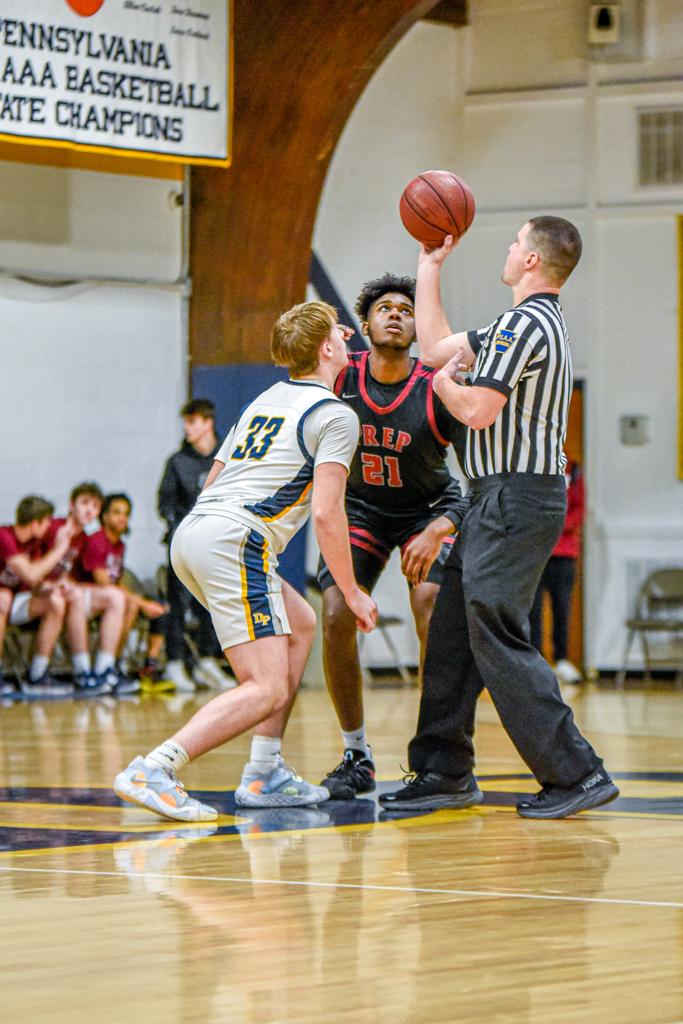 “We have guys like Olin Chamberlain Jr., Jaron Mckie and Jalen who didn’t really play varsity before last year, so they got thrown in the fire without any experience and everyone saw that,” Guillouette said. “Everybody kept saying, ‘Prep is good but doesn’t have a lot of experience.’ We had talent across the board and now guys are stepping up this year while maturing fast."

St. Joe’s Prep has been one of the surprise teams in the Philadelphia Catholic League after only winning two league games and eight total a season ago. Guillouette, who holds offers from St. Joe’s, Drexel, Hofstra, St. Francis (N.Y.), and Albany, enforced his will with 11 points and seven rebounds. He tied the game at 30-30 with a strong drop-step to the baseline then a nice left-handed finish past Conlon, who hung tough with the big man and finished with five points, six rebounds and five assists. He scored five points in the third and used a variety of moves throughout the night to score such as a sweeping hook and even a two-handed slam.

Guillouette is so important to what the Hawks do on the offensive end because he can score in the post, and hit a jumper from the baseline and elbow, but the most vital facet of his game may simply be drawing the attention of the defense to open up driving lanes and open shots for guards like Chamberlain (14 points), Harper (seven), Gorman (seven), Jordan Ellerbee (six) and McKie, who finished with a season-low four points. Harrigan understands that the Hawks go as their big man goes.

“Our game plan is always going to involve getting Tristen the ball because he passes and scores the ball really well,” Harrigan said. “They didn’t have a big to slow him down, so I thought it was a good opportunity for him, but they did a good job fighting and fronting him. We would’ve liked to have given him the ball a little more.”

After beginning his career at Life Center Academy (N.J.), Guillouette joined the Hawks as a sophomore and began to come into his own last season. While he performed well averaging 11.7 points, 8.8 rebounds and 3.2 blocks in his first season in the league, his conditioning was not at a level that he could perform deep into games and that had to change if he and the Hawks were going to not only compete but take the next step as a program. “Due to my conditioning, I’ve been able to play most of or the whole game. Last year, I would have stretches where I would need a sub and teams would take advantage of that,” Guillouette noted.

During the offseason, he committed himself to a conditioning program and dropped from 260 lbs. to 230, and it has greatly benefited him as he has been the centerpiece, literally and figuratively, to much of St. Joe’s Prep’s early success this season, which has included wins over Archbishop Ryan and West Catholic – both of which made the Philadelphia Catholic League semifinals last season. Guillouette had 12 points, 14 boards and five rejections in the Hawks win over the Burrs on Monday and he credits his improved conditioning to his recent play.

“I feel like I’m stronger so I’m pushing guys toward the rim is easier,” Guillouette said. “I jump higher and last year I didn’t get to dunk so this year I’m getting a lot more dunks. When I’m jumping for rebounds, I’m getting off the ground better. I feel like a better athlete than I was last year.”

Orchard, who led Devon Prep with 14 points, hit back-to-back three-pointers and a free throw to push the Tide’s lead to 39-34 with 1:28 left in the third. The Hawks countered with a 6-0 run to close out the quarter as Gorman dove on the floor for a steal and found Chamberlain for a layup to tie the game at 40-40 heading into the fourth. Orchard hit his final trey of the night but Harper matched with one of his own and the Hawks were up by two with 5:57 left to play.

Jacen Holloway (11 points) found Conlon, who got around Guillouette for a finish on the other side of the rim, and the game was tied at 45-45 at the 3:24 mark of the fourth. McKie asserted himself and knocked down a pull-up jumper to give the Hawks a two-point advantage before Mishock hit his only shot of the night.

The Hawks now sit tied for second in the Philadelphia Catholic League and after having already surpassed last season’s win total, the hope is that they can sustain this momentum with matchups against Neumann-Goretti, Archbishop Wood and Roman Catholic on the horizon. St. Joe’s Prep has not made the league playoffs in two years and they haven’t been to the Palestra since 2018 when Darius Kinnel (Jefferson University), Kyle Thompson (Neumann University) and Ed Croswell (Providence) starred under William “Speedy” Morris.

Harrigan has been impressed with the team’s maturation from last season and believes they’re on the right track.

“We watched them get better so once we started playing, we realized we could go out and compete with these teams,” Harrigan said. “The league is so good but for us it’s about coming out, playing our game, sticking to our principles, and playing the right way. We’ve got talent and, while some are saying we’re young, it’s January and it’s time to grow up. I think that’s what they’re doing, and it helps to be winning while you’re growing up.”