PHILADELPHIA-West Catholic came out of the locker room with a purpose, something that it hadn’t had for quite some time before Miguel Bocachica came in as head coach five years ago. A basket by MJ Branker Jr. followed by four free throws from Temple signee Zion Stanford and a huge three-pointer from Amyr Walker had put the Burrs up by seven in the third quarter.

As the West Catholic faithful rejoiced in the team’s response to a two-point halftime deficit and hoped another run would put the game away, Roman Catholic, the historically successful and last remaining undefeated team in the Philadelphia Catholic League, didn’t seem phased by what had just transpired. The unflappable Cahillites understand they will receive every team’s premiere effort but what has made this particular group so impressive it remains unperturbed by what the opposition does and evokes memories of so many great teams that head coach Chris McNesby has developed during his time at Roman Catholic.

The Cahillites walked away the same way is has in all but one game this season, with a win as they held on for a 60-55 road victory over West Catholic on Sunday. Roman Catholic (15-1, 7-0 Philadelphia Catholic League) lost league MVP Daniel Skillings Jr. (University of Cincinnati) and do-it-all sharpshooter Khalil Farmer (Hofstra) from a team that won the PIAA Class 6A Tournament title but returned four-year starter and St. Joe’s signee Xzayvier Brown and 6-foot-7 sophomore big man Shareef Jackson, son of former Cahillites and Temple standout Marc Jackson – who was on-hand to take in the game. They also had fellow St. Joe’s commit Anthony Finkley on the roster as he sat out the latter part of last season due to PIAA transfer rules and they gave the Cahillites an already formidable trio to throw out on the court against the rest of the league’s best.

Brown erupted for a game-high 24 points, including going 10-for-11 from the free throw line, to go along with five assists and seven steals. Brown’s patience and unwavering leadership were on full display in this one. After Jackson converted a putback, Brown stepped to the line and sank a pair from the line to cut the deficit to 37-34 then later Finkley (eight points, three blocks) sank his lone three-pointer of the day. Finally, Finkley found Brown cutting to the rim and the Cahillites trailed 43-39 heading into the fourth.

Brown is the calming presence of this band of Cahillites and McNesby relishes having a player of his caliber.

“We lean on him in those moments and our guys do as well by seeing him calm and making plays,” McNesby said. “It lifts everyone because he doesn’t allow us to get into a lull too often.”

McNesby welcomed several key additions this season in Robert Cottrell (Simon Gratz) and Erik Oliver-Bush (Trenton Catholic), but the most impactful one is 6-5 senior guard Jermai Stewart-Herring, who came over from St. Elizabeth’s High School (Del.) where he won Diamond State Conference Player of the Year. His skillset is eerily similar to Skillings and he has become one of the more versatile players on the Cahillites starting lineup with his ability to knock down open jumpers and attack the glass. Brown drove across the middle and found him for a corner trey to tie the game at 43-43 with 6:31 left to play. On the ensuing possession, he sank two free throws to give the Cahillites their first lead since halftime.

Stewart-Herring poured in 16 points and grabbed four rebounds and has displayed a knack for making clutch plays in his first season with his new team.

“Our best attribute is that we don’t quit, specifically at the defensive end,” Stewart-Herring. “A lot of Catholic League teams can score but we held their two best players under their averages by a few points and we knew that was basically the game. If those guys had scored a few more to their average, the game would’ve been over.”

Adam “Budd” Clark, who had 13 points, drilled a step-back three from the top of the key then Stanford (17 points) converted inside and the Burrs (8-8, 4-3) led 48-45. Oliver-Bush and Stewart-Herring hit a combined four free throws over the next two possessions and Roman Catholic was back in front by one with 3:31 remaining. On the ensuing possession, Stanford got into the lane, drew two defenders and found Walker (15 points), who muscled down low to give West Catholic their final lead of the day at 50-49. Finkley found Oliver-Bush for a huge trey and the Cahillites pulled away at the free throw line, with Brown hitting a pair then Stewart-Herring and finally Finkely to close things out. 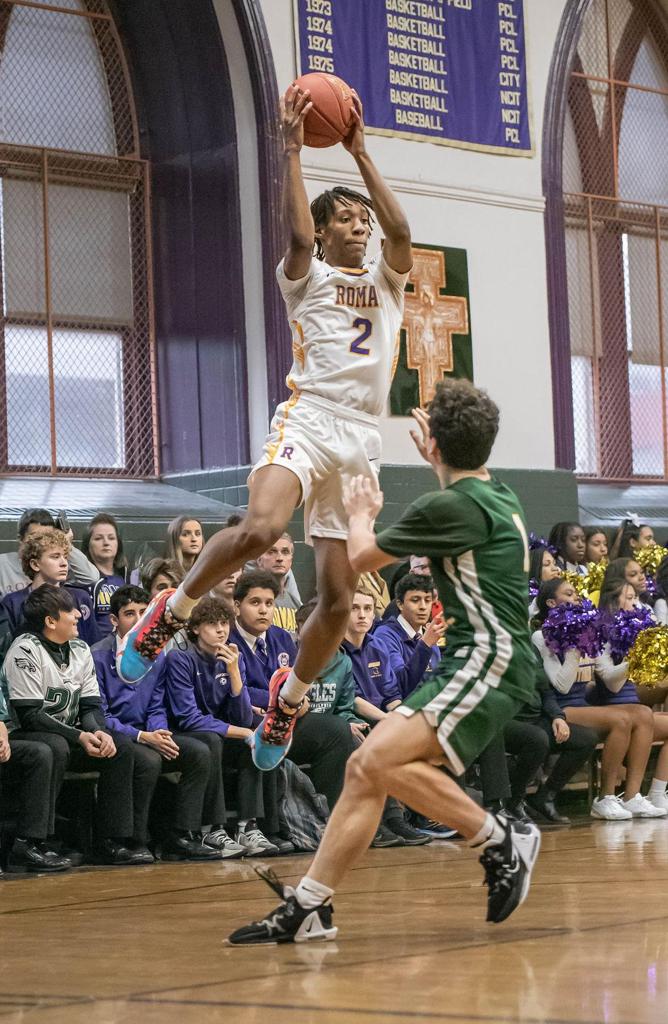 Clark shot 5-for-14 from the floor and Stewart-Herring made him work anytime he got the ball over the halfcourt line with his smothering defensive presence. His length and athleticism bothered one of the elite point guards in the Philadelphia Catholic League and McNesby has seen Stewart-Herring, who has received interest from Coastal Carolina, Columbia, and George Mason, grown into the role of lockdown defender.

“He’s such a mature senior and defensively he competes as he guarded Adam for most of the game,” McNesby said. “Offensively, he steps up in big moments. He had a three and a putback then made free throws down the stretch. He’s a super leader and while Anthony and Xzayvier do a lot for us, Jermai plays off them and finds his spots. He stays so consistent and he’s a huge lift for us.”

The Burrs have hung with those teams at the top of the standings this season after finishing near the top a year ago. They dropped a one-point loss to Neumann-Goretti and succumbed to St. Joe’s Prep in overtime last week. They had the Cahillites exactly where they wanted them as Clark hit a trey from the wing then Stanford finished through contact for an and-one to give West Catholic a one-point advantage in the second. After Brown converted an and-one of his own, Stanford tied the game by attacking inside as he went for 11 points in that second quarter alone.

Just as he did with Lamar Stevens – now playing with the Cleveland Cavaliers – McNesby is continuing to watch and keep a keen eye for what Stewart-Herring does best in his lone year with the program. Stevens began his career at The Haverford School then helped Roman Catholic to a Philadelphia Catholic League and stat title as a senior and Stewart-Herring is trying to do the same thing as he receives influential guidance and advice from a seasoned and accomplished tutor.

“This is the first time a coach has really been on me,” Stewart-Herring said. “He wants to see me be great. He tells me at practice he wants me to be consistent and that the team needs me out there. I knew coming here was the right move and I’m learning the winning nature.”