PHILADELPHIA- Championships are not won in one day; they are the culmination of months of work, practice, and preparation. For the girls of Archbishop Wood and Lansdale Catholic, a win in Saturday afternoon’s Catholic League title at South Philadelphia’s Super Site would have reaffirmed the countless hours of labor they put into honing their craft.

But there can only be one winner, and on this day, it was Archbishop Wood. The Vikings defeated the Crusaders, 2-1, on an overtime goal by Sofia Filippo that began with a corner shot by Kylie Menarde.

Filippo was euphoric after heading the game winner, but not simply because she was a champion, but because she got to do it with her best friend.

“It was the best feeling ever,” said Filippo.  “It’s especially special because Kylie has been my best friend since I was about nine. I played with her on my club team and here and we’ve always wanted to win a game like this and we never had.”

The game was a showdown between two of the Catholic League’s soccer elites, and throughout the afternoon, they put on a show for the crowd at the South Philly Super Site. 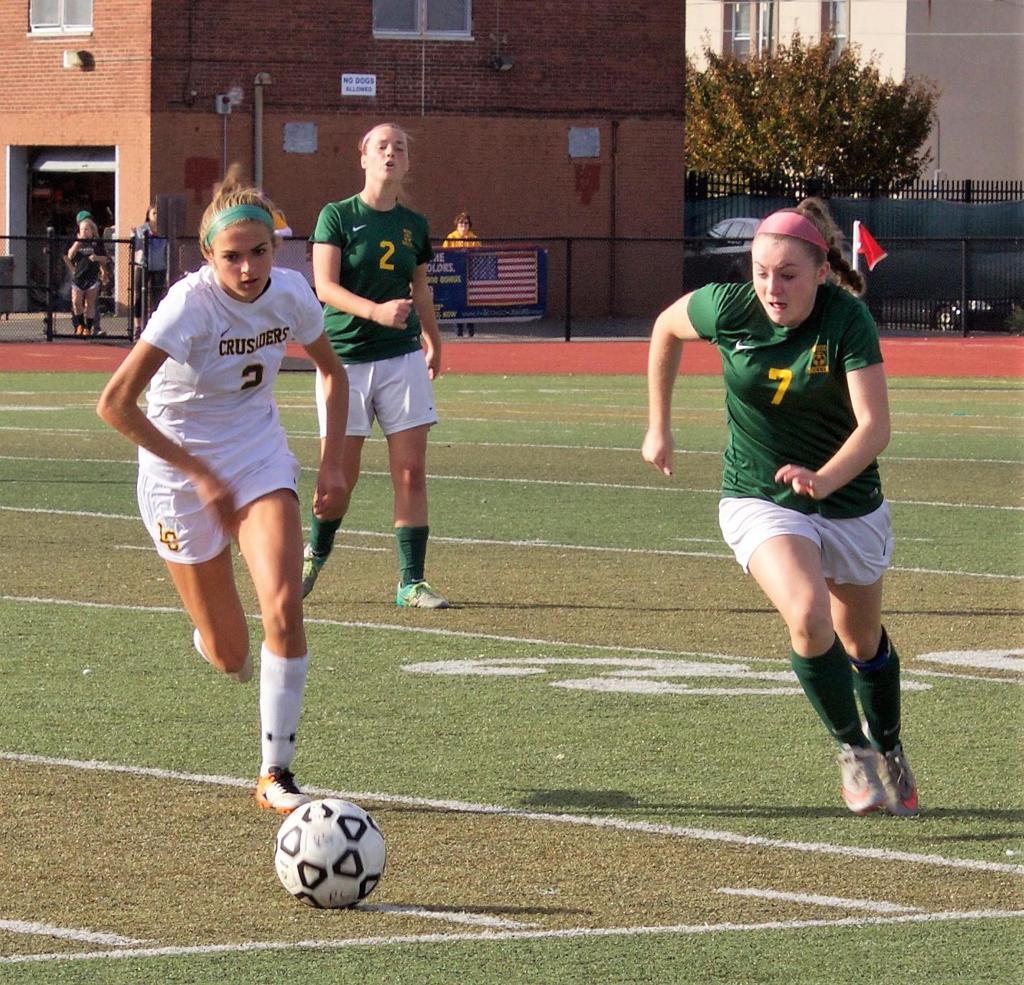 Defense was the name of the game, as each team gave little leeway in terms of allowing its opponent to push the ball up field.  When facing a constrictive defense, all you can hope for is a breakdown somewhere in coverage and for an opportunity to show itself. That is how each team got on the board in the first half.

Lansdale Catholic opened the scoring early in the first when Sarah Fitzpatrick scored on a defensive breakdown; Erin Toburen had the assist. The Wood defender and goalkeeper failed to make a play on the ball, which led Fitzpatrick to make the hustle play and steal a goal.

It was a similar story several minutes later when Wood’s Leah Brzezicki scored on a penalty kick to tie the game at 1-1.

Both teams played a very physical, smash-mouth style of soccer. At times, tempers were begging to flare. Referees occasionally intervened, which only led to players arguing with the officials, something that quickly became routine. On more than one occasion the referee had to stop play to exchange words with a player.

The second half of play was all Lansdale Catholic. The Crusaders dominated possession for much of the half. They did not get very many shots on goal in the half, but they let a golden opportunity slip through their fingertips when Colbie Cummings went wide left minutes before the end of regulation.

Extra time would be necessary to decide the Catholic League championship. The overtime period would end somewhat quickly, however, as Filippo headed in a corner kick from Menarde to win Archbishop Wood the title.

Waves of emotion then quickly swept the field as the newly minted champions soon charged the goal and dogpiled on the day’s hero.

Wood’s head coach, Bill Cappo, was thrilled with his girl’s ability to keep fighting even when they were down. He loved their resilience and effort.

“I think they played great,” said Cappo. “They were down 1-0. They got a break on the penalty kick, and they played against one of the best forwards in the PCL in Kate Henesey, and my defense held her pretty well.”

Lansdale Catholic head coach Tom O’Donnell felt his team played a great game of soccer, but came up just a little bit short due to their failure to make good on the opportunities that presented themselves.

"I thought the last 15, 20 minutes, it was all us pushing forward and it just doesn’t go in for us,” said O’Donnell. “Maybe we had a different opinion about some of the things that happened in the latter part of the game, but it doesn’t matter what we think. I give the other team credit. They kept trying and kept pushing and they got the goal.”

The worst part of the loss for coach O’Donnell is the fact he knows this feeling all too well.

“Believe it or not, we were last year’s losers too, and we’ve lost to Wood in overtime too,” he said. “We’ve been down this path and I almost feel numb seeing that ball go in because I’ve been here before.”

This was an Archbishop Wood team that started the year on a two-game losing streak and also lost 4-1 to Lansdale Catholic, earlier this season. They had to play from behind to start the championship game, but none of it mattered to Wood as their resilience was not to be denied.

This was not a championship team to start the year, but as the season wore on, they grew through their trials and tribulations.

“I think we got more used to playing with each other,” said Filippo. “We got used to how each other plays. I think that’s definitely a big part of it, and we got confidence. I have yet to win one in all four years, so it means everything. We worked so hard, and to finish with a win is just great.”