PHILADELPHIA - Last Friday night was packed with Catholic League basketball. Archbishop Wood took on Bonner-Prendie, Neumann-Goretti faced Archbishop Carroll, Archbishop Ryan defeated Father Judge, but perhaps one of the most anticipated games of the evening took place between St. Joe’s Prep and Roman Catholic. For the Cahillites, this night served as  a rematch of the game they had played just 5 days earlier in the final game of their regular season. The Prep walked away with a 73-70 overtime victory in that match-up, but not this time.

As the game tipped off, the atmosphere inside the Gallagher Athletic Center on the campus of Philadelphia University was electrifying. Both teams’ fan groups came out in full support hoping for a trip to the historic Palestra. The game got out to a fast start for both teams as they exchanged points each possession. This style of play continued throughout the entirety of the 1st quarter with little stoppage in play. At the end of the 1st, the Cahillites only led by one, 17-16.

After the nonstop action, the Gallagher Athletic Center was still beaming with excitement as the 2nd quarter began. While the Cahillites kept up their fast paced offensive possessions, the Hawks slowed down the game in the offensive zone and were careful with shot selection. However, Roman capitalized on more opportunities and stretched their lead to 31-25 at the half.

The Prep came out firing on all cylinders into the half with Kyle Thompson leading the way for the Hawks on the floor. While all was looking up for the Hawks, big man Ed Croswell got into foul trouble and Hawks' head coach Speedy Morris had to be careful of how he was used throughout the rest of the game.

Croswell remained in foul trouble for the majority of the third, but senior captain, Matt Hartz, came in for the final minutes of the quarter. Despite suffering from a heavy height disadvantage, Hartz and the rest of the Hawks held their own and did well against Roman's big men, Allen Betrand and Seth Lundy. At the end of three quarters of play the Cahillites led 44-41.

It all came down to the final quarter of play on Herb Magee Court. Both teams were playing excellent in the offensive and defensive zones and the crowd could feel that it was going to be a battle until the end. It was looking like a replay of the 1st quarter the way the teams were going back and forth, one team scoring and the other quickly answering back. With one minute left in regulation, Roman held their 1-point lead over the Hawks and the game looked like it was headed into overtime. Hawks junior guard Kyle Thompson was fouled and sent to the line to shoot two. He sank them both and The Prep regained the lead. Unfortunately for the Hawks, it wouldn’t last long.

The Cahillites were able to score before time expired and take a two-point lead. However, just when Roman thought they had it in the bag, Thompson was fouled again on the inbound and went back to the line to shoot two with .7 seconds left. Thompson made the first and but he missed the second and the game was over.

Roman won with a final score of 56-55 to advance to the PCL semifinals. It was a difficult loss for the Hawks, but the future is bright as Thompson, Croswell and Darius Kinnel will all return for their senior year. 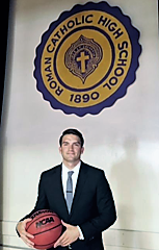 This game win was both bitter and sweet for Roman head coach Matt Griffin. Griffin, played basketball for the Prep under coach Speedy Morris and served the last two years as assistant coach to the Hawks before taking the head coaching job at Roman. His father John Griffin, a Roman graduate, also played for the Cahillites  under Speedy's helm. For Griffin, this game became a full-circle moment.

“I grew up watching Speedy Morris coach, playing for him and coaching with him. I love him very much and he is my mentor. I was so proud of my team who worked so hard this season to get back to the Palestra when no one thought we could but it was tough because one team had to win and one had to lose. It is the nature of the game. Ultimately, it was a heck of a game and I’m excited for our kids to have this opportunity to compete at the Palestra for the final four of the Catholic League,” said Griffin.

After the game, Griffin hugged every player and coach on the Prep's team.

Griffin also knows that getting the opportunity to go from spectator to participant at the iconic Palestra is truly extraordinary.

“I've never played at the Palestra and have been an observer my entire life. I grew up watching Ivy League games, Big Five games, showcase HS games and even Catholic league games on this court. To get a chance to be a participant is special. I'm glad my players get to experience it. It will be something they remember forever,” said Griffin.

The Cahillites will be heading to the semifinals tonight to defend their PCL title against Neumann-Goretti. Like this entire season, Griffin will rely on his team’s determination to see them through.

“We have won many tight games this season with a lot of them coming on the last possession. This has been a result of our seniors who have helped us stay composed every day during practice and in those closing seconds. Our toughness and grit have got us to this point and nothing will change in our matchup with Neumann."

Through it all, this journey has been very special to Griffin and win or lose you could not find a coach more honored to be a part of this team.

“Words can’t describe how proud I am of these kids. This group battled every day since September to get here and even though we have not yet accomplished our ultimate goal, I could not be more proud of a group of kids than I am now. They have taken pride in wearing that jersey and keeping the Roman tradition."