Senior guard Quade Green had 18 points and seven assists in the Saints' 67-56 win on Wednesday at the Palestra.

PHILADELPHIA - Roman Catholic sophomore forward Seth Lundy was focused in the moments leading up to Wednesday’s game at the Palestra.

With about three minutes left in warmups before the Philadelphia Catholic League’s third-seeded Cahillites took on No. 2 Neumann-Goretti, he stepped up to the free-throw line to practice his stroke.

Lundy’s dunk with three minutes, 56 seconds left in the third quarter tied the game and brought the near-capacity crowd at the Palestra to their feet. Saints coach Carl Arrigale called timeout with 3:50 left and his team responded.

Junior guard Dymir Montague scored on a drive to the hoop and converted an and-one immediately out of the timeout. Senior guard Quade Green made a right-wing 3-pointer to put Neumann up by eight points about two minutes later. Roman didn’t score again until senior guard Chris Kuhar made a dribble drive with less than 40 seconds left in the half to end the 8-0 Saints’ run.

“It was tough,” Roman coach Matt Griffin said of the Saints' 8-0 run. “I thought we had controlled the tempo of the game to where we wanted it and we gave up a couple baskets and that run just kind of, we couldn’t recover. I thought with a thin bench, it was just, we wore down by the fourth quarter we’re giving up second-chance points and it was too late.”

After not scoring in the third quarter, senior forward Dhamir Cosby-Roundtree scored 11 points in the fourth quarter. The Villanova commit finished with 19 points on 7-of-8 shooting from the free throw line and 6-of-8 from the field. Cosby-Roundtree also had 14 rebounds. Green, a University of Kentucky commit finished with 18 points and seven assists. He shot 2-for-3 from 3-point range and 7-for-12 overall.

Griffin attempted to use a zone defense to limit the pair’s productivity. The Saints got supplemental scoring from junior guard Dymir Montague and senior forward Mike Millsip, who each had seven points. Sophomore guard Christian Ings added nine points for the Saints.

Neumann-Goretti coach Carl Arrigale focused on attacking the zone defense when he called timeout before the Saints' 8-0 third-quarter run.

“I knew they weren’t going to come out of it because we didn’t do anything to force them to come of it," Arrigale said. "So I just wanted us to get into the gaps a little more and space it out on the corners some so we could get some drives and get into the gaps and maybe find [Cosby-Roundtree] a little bit.” 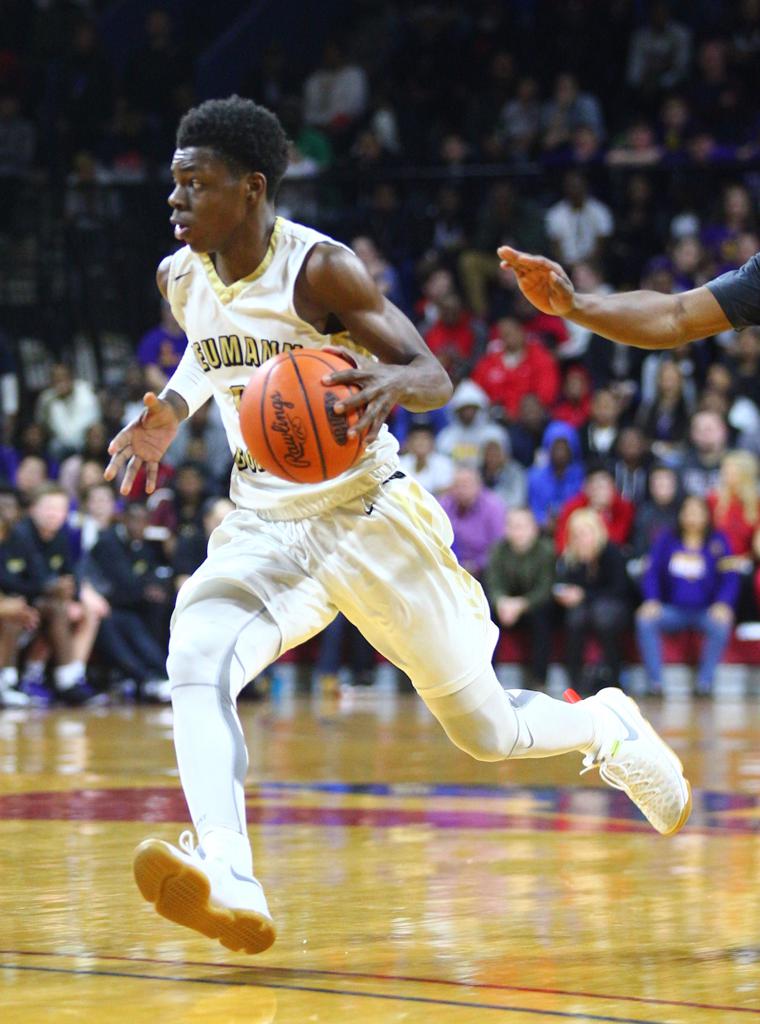 Roman Catholic's Seth Lundy comes up strong with a dunk 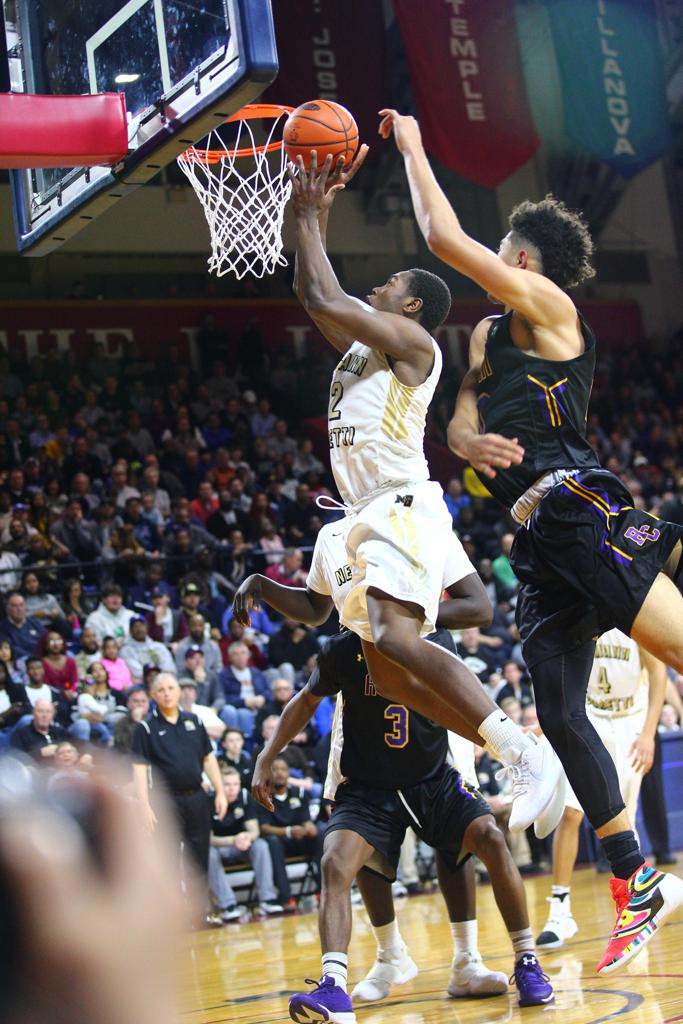 Roman cut its deficit to five points nearly midway through the final quarter but Neumann pulled away at the foul line. The Saints only missed four of their 19 free throw attempts, while the Cahillites went 11-for-20. Senior guard Da’Kquan Davis finished with 11 points but went 2-for-7 at the charity stripe.

Lundy came out strong in the first half, finishing with 14 points in the opening 16 minutes. He finished with 20 points on 8-of-13 shooting from the field.

"He was a little bit of a mismatch for them so he was able to play inside and out and he stepped outside made a couple shots early, which is very helpful," Griffin said.

Lundy scored 10 of Roman’s first 12 points. But then his teammates started getting in the act. Roman cut its early deficit to 18-16 after two free throws by junior guard Allen Betrand but Ings answered with a right-wing 3-pointer. Betrand came back with a jumper in the lane to cut it to a two-point deficit again.

Roman cut it to a one-point deficit when senior guard JP Sanders hit a two-pointer from the right elbow to make it 21-20 but that would be the closest the Cahillites would get in the first half. Millsip answered with two points then Green threw an alley-oop to Cosby-Roundtree on the Saints’ next possession.

Green sank a 3-pointer with the clock running down at the end of the first half to give the Saints a six-point, 28-22, halftime lead. He led the Saints with nine points in the first half. Cosby-Roundtree had six points on 3-of-4 shooting and eight rebounds in the opening 16 minutes.

He is excited for the chance to win a title before beginning his college career at Villanova.

"This is my last chance to actually win a Catholic League title...so I’m just trying to give it 120 percent every time so me and my fellow seniors can feel the winning feeling of winning a championship," Cosby-Roundtree said. 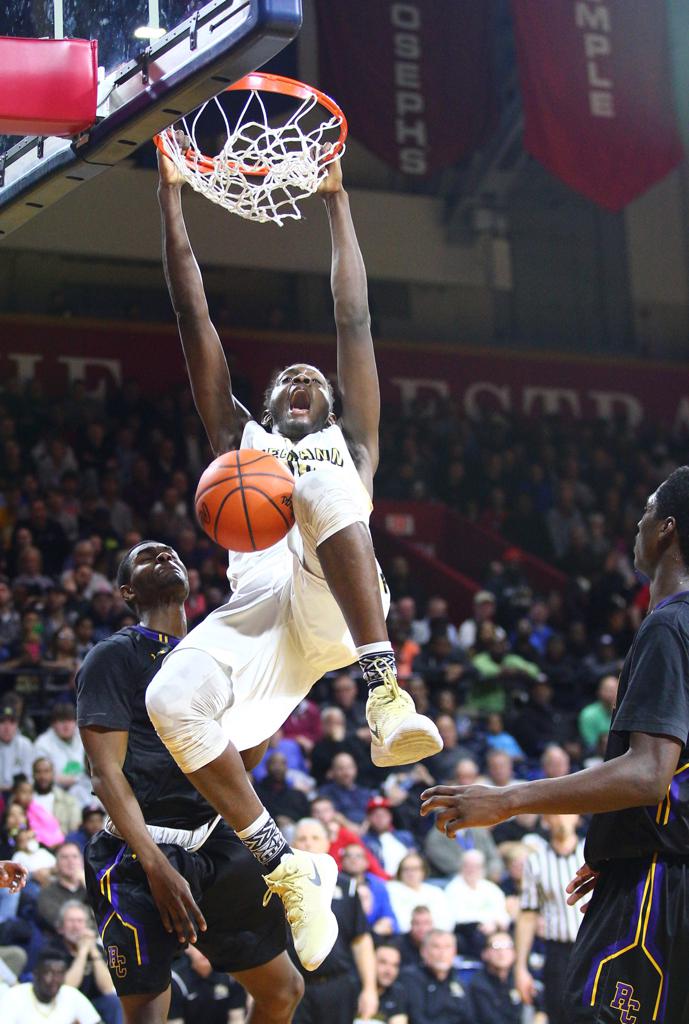