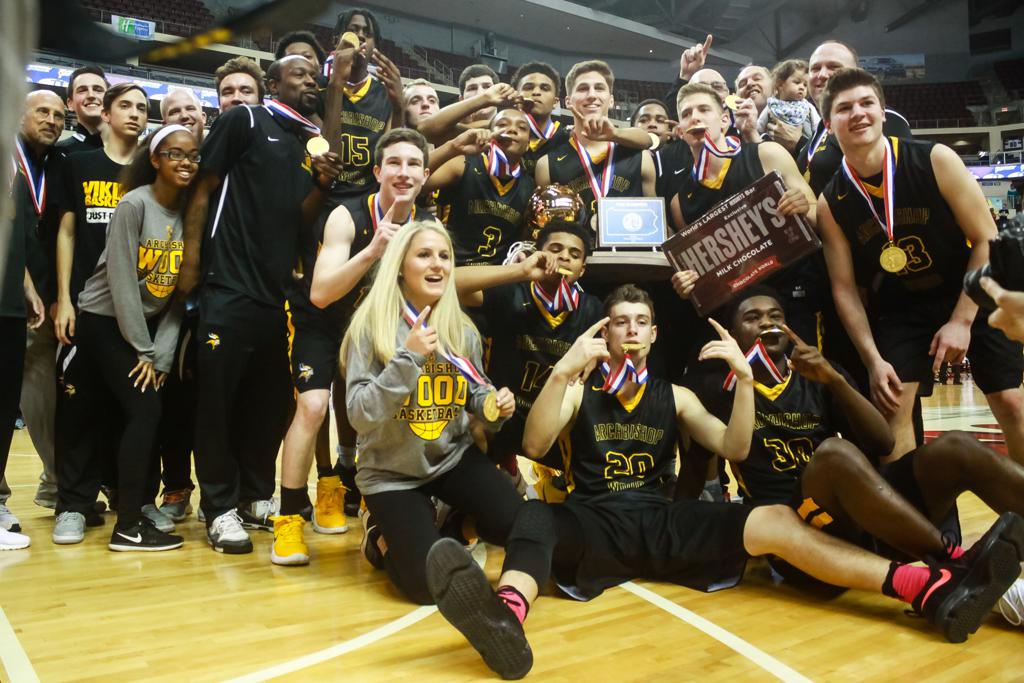 Multiple months of relentless toil, including losing its gym in the first week of January for what turned out to be the remainder of the season. Multiple years of individual instruction and playing on various club squads all over the Delaware Valley and beyond.

In the end, it all came down to 32 minutes on Friday night in Chocolate Town.

And when that half hour-plus two came to a halt, something could be said that could never have been said ever before . . .

Archbishop Wood boys’ basketball team is the 2016-17 PIAA Class 5A state champion. The Vikings walloped District 10 champ Meadville High School, 73-40, a margin that only partly indicates how lopsided the game actually was before an announced crowd of 4,932. 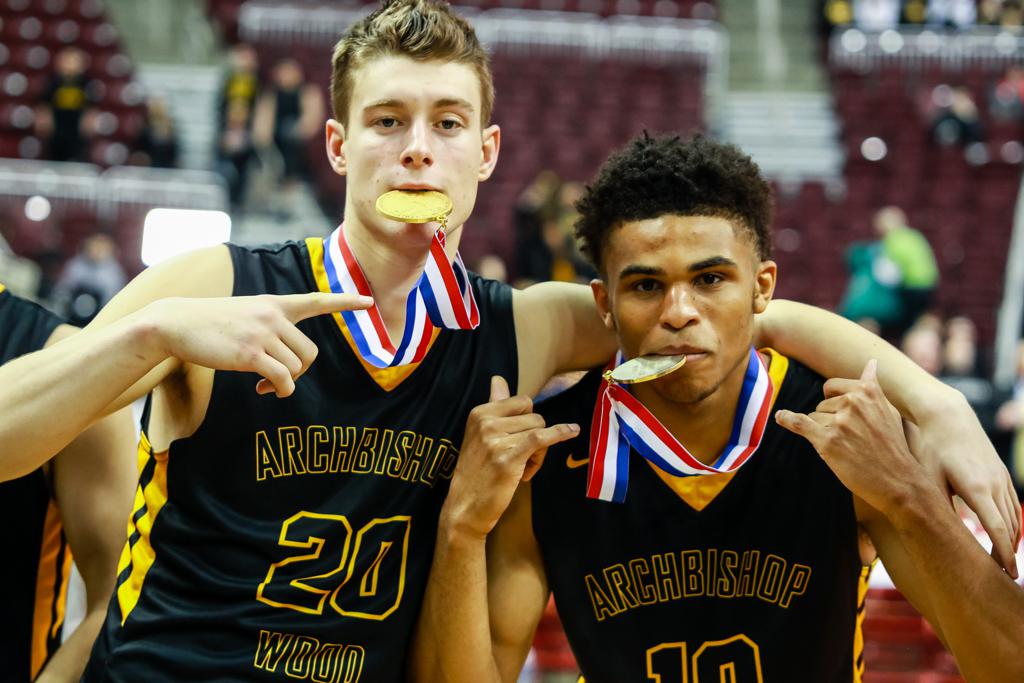 Pickron, a junior forward who eclipsed the 1,000-point career scoring plateau in a 71-46 quarterfinal win over Spring Grove, chose the ideal time to lead his team in scoring. His 18 points included five three-pointers on nine tries. With senior star Collin Gillespie (15 points, 10 rebounds), junior Seth Pinkney (11 points, 11 rebounds, four blocks), and junior Andrew Funk (10) providing most of the other offense, Wood coach John Mosco was presented a rare opportunity to provide minutes for each of the team’s 14 players on the roster.

“It was great,” said Pickron. “I hope they liked it. It’s something that we want them to get used to.”

Collin Gillespie embraces his team after leaving game for the last time late in the fourth quarter.

Matt Cerruti has a ton of great memories to look back on this season.

Honestly, this was a contest that might have been more entertaining if Meadville had been spotted a dozen points before the opening tip. By the midway point of a first quarter that ended with Wood comfortably ahead, 17-5, it was painfully obvious that Meadville’s gaudy record of 26-1 would not match the abundantly talented Vikings.

En route to finishing the season with a best-ever 28-3 record, the Catholic League champion Vikings basically did whatever they wished. Resembling a pick-up game by the midway point of the second quarter, the only thing that kept the Bulldogs within an un-embarrassing distance were the Vikings themselves and some compassion from the referees.

A missed dunk . . . a few unnecessary passes that killed potential baskets . . . a phantom, mercy foul call by an official against an overmatched Bulldog here and there.

Shawn Thompson talks about winning a state title in both football and basketball.

Senior Keith Otto appreciates going out as a state champion.

With 1:38 left before halftime, Wood led 33-16. A three-pointer by Meadville was immediately answered with a short jumper by Gillespie and a three-point swish by Pickron. The message was clear: Wood was far superior; victory was never in doubt.

“That team’s a good team,” said senior Matt Cerruti, who scored seven points and added three assists. “I knew they would keep battling. We tried to stay focused and keep building our lead and get some other guys in the game to get this experience.”

Ahead 40-21 at halftime on a last-second tip-in basket by Pinkney, the Vikings entered the dressing room amid loud cheers by hundreds of zealots dressed in black and gold. At the opposite end of the court, Meadville appeared punch-drunk, understandable after shooting an abysmal 6 for 22, being out-rebounded by 23-15, and out-assisted by 8-3.

Andrew Funk is prepared to be one of next year's leaders.

Which Wood team would show up in the second half? A squad that wanted to smother its foe, or one that preferred to bask in the spotlight amid fancy, highlight-reel contributions?

Not surprisingly, it would be . . . that former. Gillespie and Pickron nailed treys and upped Wood’s “edge” to 46-21. On three occasions in the third quarter, a Wood player was slammed to the hardwood after questionable aggressiveness by Meadville . . . with none of them accompanied by a foul call.

Apparently, there were no hard feelings.

By the end of a third quarter aided by a coast-to-coast bucket and subsequent three-pointer by Funk, the Vikings’ 19-point halftime lead had swelled into a twice-as-good score of 58-29 after three quarters.

At the midway point of the fourth quarter, Mosco took his starters out one by one. Each player embraced teammates and coaches on the bench while the seconds ticked away. 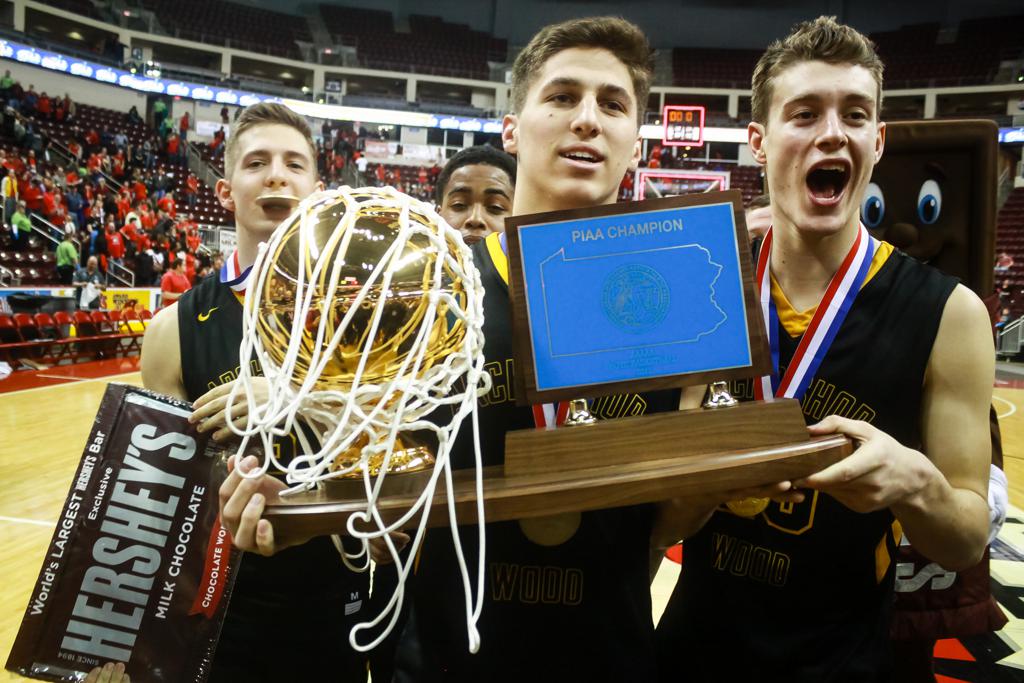 With 2:55 left in the 2016-17 basketball season, Gillespie was substituted for Funk, and the Wood faithful cheered. It was a fitting gesture by Mosco to wait to take out his star player last.

“I’m just excited right now,” said Gillespie, who finished his Wood career with 1,132 points. “We came out with the right mindset and finished.”

Gillespie credited several Wood graduates for establishing a winning expectation and said this year’s Vikings “became close friends and bonded like a family.” He was asked at what point of the season did he think this Vikings team could be something special.

Ironically, it was Wood’s final loss, 68-60 to Father Judge in the Catholic League opener back on January 3. Now, 21 consecutive wins later, the Villanova University-bound Gillespie had taken the team to amazing heights.

“The loss to Judge at home gave us a different perspective how the season could go,” said Gillespie. “I think it made us play with a chip on our shoulder the whole year. The Catholic League is so tough.”

As he stood proudly wearing his state championship medal, fellow senior Cerruti summarized the magnitude of what had just occurred.

Cerruti looked down, rubbed his medal, and smiled.

“Wearing this is quite a thing to do,” he said. “We’ll remember this for the rest of our lives.”

(John Knebels can be reached at jknebels@gmail.com or on twitter @johnknebels.)

Wood's unstoppable offensive line with a set-up from Funk, to Gillespie, with a pass to Pickron and back to Funk for a three/ video Brandon Stivers