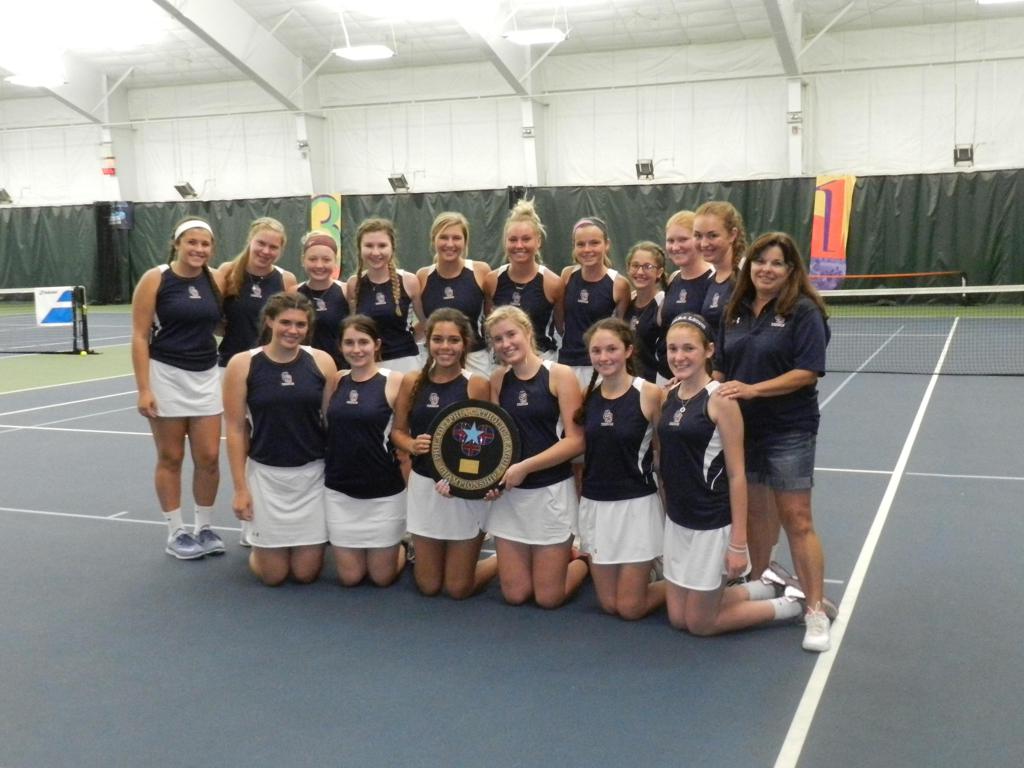 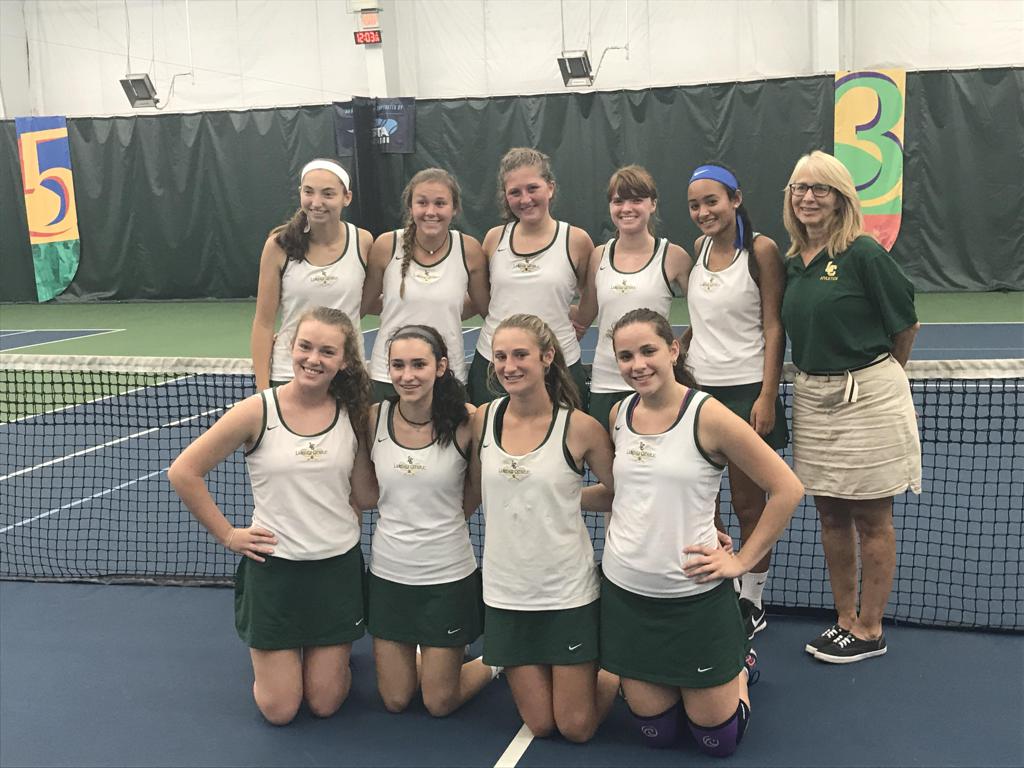 This was the third straight battle for the title between both squads, and the Lady Crusaders put up a valiant fight against the reigning champions. Overall, Lansdale Catholic’s second doubles team of Emily Handschuh and Katie Duffy took home the sole victory for the Crusaders, defeating Lauren Logue and Kathryn Toal in a close match 6-2, 6-7 (9-7 tie-breaker), 6-4.

Following her match, Lynch was pleasantly surprised to find out that her grandfather, Walt Kokol, had been watching her play the entire time. Except, he was not physically in attendance. Kokol had been watching his granddaughter play her match via FaceTime, all in the comfort of his home in Aston, PA.  Talk about the benefits of modern technology… Lynch’s cousin, Rose Kokol, propped her cell-phone up perfectly against the upper-deck fence so that the camera lens shot directly through a small hole, managing to get the entire court and match into view.

"He (Walt) has been to a couple of games at O'Hara this year, so he was disappointed he could not make this match. This was perfect for him," said Caroline's mother, Christine Lynch when asked about her father watching the final match from his bird's eye view. "He had the best seat of all of us today. He was having his breakfast and drinking his coffee like it was a good old morning and he was just watching TV."

Kokol was sure to give the old "thumbs up" when the match was finished and his granddaughter secured the victory.

“It was pretty exciting because I knew (my grandparents) couldn’t make it, but it was special that he got to see it,” said Lynch. “They don’t facetime that much. When I heard that they did and were walking around the house with it watching was pretty funny.”

Earlier in the competition, the Crusader’s vie for the title looked promising. Lansdale’s No. 1 singles player, Shannon Carr, took home the first set 6-4 against O’Hara junior, Anna Marie Degnan. However, Degnan managed to secure the second, forcing a third set to be played. After over two hours of intense rallies, Degnan won the match for O’Hara, 4-6, 6-4. 6-0.

Ask anyone in attendance which match was the most entertaining of the morning and the likely response would be the No. 1 doubles match between O’Hara’s Mackenzie Gardler and Mary Clare Hayden and Lansdale’s Delaney Smith & Rebecca Tiley. Both sets of partners ran down every point, enabling long and intense rallies to be played. After tying 6-6 in the first set, a 7-point tie-breaker was enforced, in which Gardler and Hayden won 7-3. The O’Hara senior-freshman duo found their mojo in the second set in order to come away with a 6-2 victory.

“I’ve been doing this the past couple years, but I like pairing a senior with a freshman so that the freshman is paired with a strong leader. I put Kenzie in this spot last year, where she played with Caroline, who now plays second singles. She is a very strong leader, and it’s because she is a very strong basketball player. She’s just a true athlete and just does not want to lose. And she will do whatever she can to win, by running down balls all over the court,” said Cardinal O'Hara head coach Patty Fitzgerald. “When you play with someone like that you become that and they show you what you are supposed to do. Clare was very nervous coming out as a freshman, but Kenzie leading her along and just being herself, really helped.”

Gardler, who is committed to play basketball at Villanova University, is a two-sport PCL champion as her Lady Lions won the PCL basketball title against Archbishop Wood at the Palestra this past February. No matter the sport, Gardler explains each championship title is just as special.

“Each one you get nervous because it’s a championship. But the difference is that basketball is obviously my main sport, so having my second sport be just as successful is amazing. And sharing it with totally different people is such a cool experience,” said Gardler.

Coach Fitzgerald has greatly influenced the tennis culture at O’Hara, as she has been the head coach of the boys’ team for 18-years and 16-years, respectively, for the Lady Lions. While each fall season brings out a new group of athletes, her key to continued success with the girls remains constant – practice makes perfect.

“When we start in August, there are new girls and I just stress that they need to keep practicing. With anything the more you practice, the faster you will get better,” said Fitzgerald. “I really like seeing how my team improves with every game and I like having the team bond and be close and build off each other.”

On the other side of the net, Lansdale’s No. 1 doubles team of Smith and Tiley have only been playing the sport of tennis for a grand total of 45 days. The pair, who are also neighbors, decided to try out for the tennis team this fall. Their on-court chemistry and innate tennis skills have given the Crusaders an edge in doubles throughout the season.

“For them to come against O’Hara and end up having a tie-breaker first set and playing so well against girls who have played for years is just phenomenal,” said Lansdale head coach, Wendy Bradshaw.  “Delaney, who is a senior, will surely be missed next season. She just brought a new energy and court presence to our team that we never had before.”

Going forward, Lansdale will only be losing Smith to graduation. Bradshaw and the Crusaders are already looking forward to making their run at the title next season.

“I am so proud of my team because they have improved so much this season,” said Bradshaw. “I have a whole mass of juniors and one sophomore. So, next year is going to be a big year for us because we have everybody returning.”

While both teams’ PCL season is complete, each team will represent the Catholic League in the District 12 playoffs next week. Lansdale will be playing Masterman on Oct. 19th and O’Hara will be playing Central High School.

See below for match play, photos and trophy presentation.