Six teams knew their fate and were able to enjoy a brief vacation. Four others needed one more win to officially advance to the league playoffs.

Lansdale Catholic has arguably been the “feel good” story this fall. Teetering near the bottom of the standings, the Crusaders shocked the rest of the league on October 6 when they tied La Salle, 1-1. The Crusaders had entered the contest with a 2-5-1 record as opposed to La Salle’s 8-0. 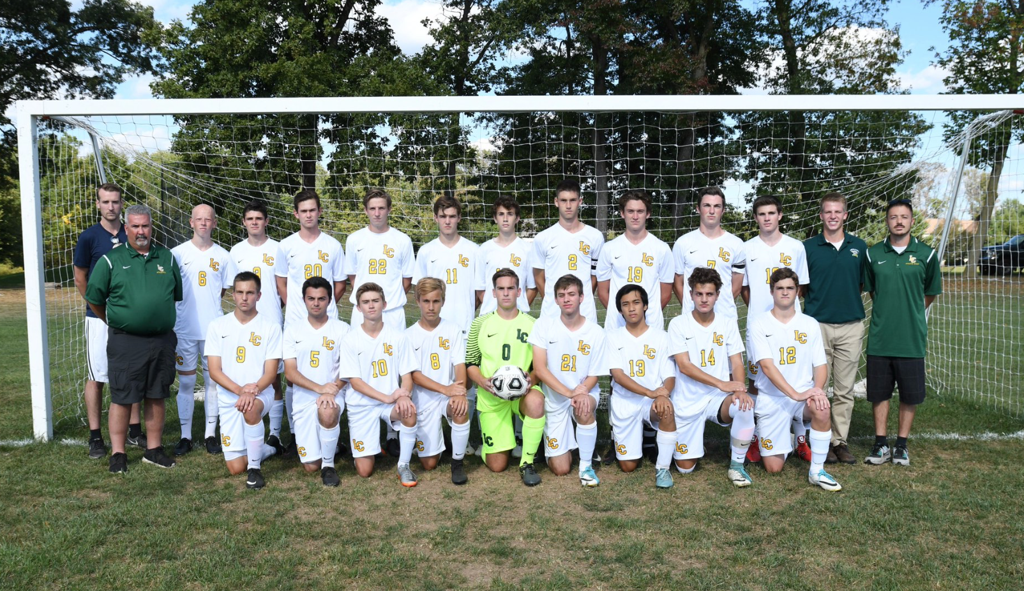 No. 8 Lansdale Catholic will play No. 2 Roman Catholic on Friday evening in the PCL Quarterfinals - photo courtesy of @LCCrusaders

Suddenly rejuvenated, the Crusaders have not lost since. They followed the La Salle tie with a 1-1 stalemate versus Archbishop Ryan and then a 2-1 triumph over Father Judge in their regular-season finale.

“That game could turn the season for us,” said Edling after the tie against La Salle. “We came into the game with the thought of giving it our all and executing our game plan. They are a great team and have a ton of talent.”

“We had some difficulty scoring, and scoring on a team like LaSalle was huge,” he said. “We were worried in the beginning knowing they were undefeated, so we decided our best offense would be building a good defense. Them only scoring one goal on us was huge.”

In the pre-playoff victory over Archbishop Carroll, the Crusaders trailed, 1-0, at halftime. LC’s offense then awakened. Sophomores Sean Cole and Evan Senour found twine in the first five minutes of the second half to give the Crusaders a 2-1 lead. About 20 minutes later, junior Kyle Kane increased the advantage to 3-1, making a Carroll goal during the closing minutes moot.

“It feels awesome but the season isn’t over,” said Edling. “We gotta just keep fighting.”

So, other than the La Salle tie, what turned around LC’s season?

“The realization that it’s some of the players’ last year,” said Edling. “They don’t want to go out in an upsetting way.”

Senior goalie Joe Duffy is not surprised by his team’s resurgence.

“It’s where we expected to be when the season started, but the path we took was not the easiest for us,” said Duffy. “We are where we wanna be now.”

Cardinal O’Hara made the most of their spot as the 10th-seed, stunning seventh-seed Bonner-Prendergast. Senior goalie Ryan Henderson orchestrated the shutout. In penalty kicks, sophomore Jalen Hammond’s penalty kick that made it 4-3 proved to be the game winner, setting the stage for a Bonner-Prendergast attempt that deflected off the crossbar to end the game.

The crowd stormed onto the turf to celebrate with the playoff-bound Lions.

“This victory meant so much,” said senior co-captain Kevin Calamita, who contributed one of the penalty kick goals. “We had to come back from missing our first two kicks against probably one of the best goalies in the Catholic League to making four in a row and come back to win.

“It brought tears to my eyes seeing the crowd rush the field and celebrating our first playoff victory in over seven years. It was so special to share this moment with these guys and I hope our season can continue and we can build this program into a top-tier program someday.”

Henderson was grateful for the result.

“I was very excited for my team after playing such a great game for 100-plus minutes,” said Henderson. “To get a post-season win against a rival was a great feeling.”

Worth Noting End of Season Run:

Conwell-Egan needed nothing less than a victory over St. Joseph’s Prep in the regular-season finale, but the Eagles fell short, 2-1.

Eliminated from the post-season, the Eagles still can be proud of their efforts down the stretch. The Eagles’ preceding three games included a scoreless tie with Cardinal O’Hara, a 1-0 upset of Father Judge, and a 2-1 double-overtime victory over Bishop McDevitt.

“Those last four or five games, we played really amazing,” said senior co-captain Jack Barreras. “The younger kids on the team improved in every game and continued to grow.”

Two of Leible’s goals were game winners. He supplied the only tally in the win over Judge – the first time C-E has bested the Crusaders in 12 years – and he executed the sudden-death clincher versus McDevitt.

“I believe you’re only as good as your last performance,” said Leible. “That being said, (the overtime winner) was a huge moment for me and the team. We knew we had to win to continue our season and I was able to help do that, so it was a special moment for all of us.”

“I have to give them a lot of credit for our success,” said Held, referring to Barreras, Steve Konnovitch, and Kevin Blair. “They are our leaders on and off the field and are always giving (underclassmen) heavy team pointers and things we can do to get better for next year.”