GIRLS' SOCCER: Penalty Kick Showdown as Ryan and Hallahan Battle on the Field in Quarterfinal Thriller

NORTHEAST PHILADELPHIA--Let’s get the elephant out of the room shall we.  What had to be the most exciting, heart-pounding, nail-biting and most shocking girls’ soccer game of the entire season was the Philadelphia Catholic League’s quarterfinal match-up between No. 1 seeded Archbishop Ryan and No. 9 seeded John W. Hallahan.

The Ragdoll’s, (10-0-1) league, lined up on their home field Thursday afternoon, confident, poised, relaxed and ready for what seemed to be an easy win.  After all, they previously beat the Mickey Mouse 8-1 earlier in the season.  Let’s just say Hallahan, (3-7-1), had other plans.

“Do not go gentle into that good night….”

For close to two and a half hours which included two overtimes, the Ragdolls and the Mickey Mouse remained scoreless.  As time progressed, the Ragdolls offense was getting even more forceful. This proved futile for Ryan as Hallahan’s junior goalie Emma Stokes was spot on stopping every attempt the Ragdolls made to get to the back of the net. Stokes's defenders also did their jobs as the Ragdolls’ offense never let up and held their positions in the Mickey Mouse’s defensive zone for 80 percent of the game. Both teams exhausted, the win would come down to penalty kicks.

Spectators from both sides lined the fence cheering, and clapping for their respective players. Members from both teams held hands with intense anticipation as the first-round of penalty kicks began. Five players from each team lined up alternating one-by-one taking straight shots at Ryan’s goalie Devon McDonald and Stokes. Four goals made from both teams forced a sudden death round of PK’s. It was anyone’s win.

The deciding factor came as the 11th player lined up to take her shot. Senior captain Haley ONeill made it past Stokes giving Ryan the 5-4 victory in penalty kicks that secured their seat in the PCL semifinal round.

“As soon as we hit the first overtime, I knew we could’ve won. Even the first half, we were owning the field. You could see in everyone’s heart that they wanted to win,” said Hallahan goalie Emma Stokes. 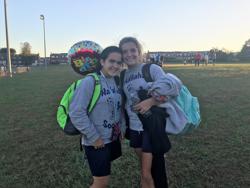 Hallahan may not have come away with the winning goal, but with a resilience and determination all their own, they came away this season with so much more.

“We kind of made the impossible, possible. Not everything is about winning. It’s about growth and bonds that we make and how we thrive overall as a family,” said Stokes, who came back this season after suffering a serious leg injury in August 2016. Stokes split her shin and tore more than 75 ligaments in her right ankle. "Although we lost, I would’ve never imagined in a million years we would have made it to sudden death with Ryan. It was pure insanity.”

“Our mindset was to believe that we belonged there and that we could win.” said senior captain defender Elizabeth Stermel.

“At that point, we had come this far and proved that we were just as good as anybody else in the league and we have to keep pushing,” said Stermel when asked what was going through her mind going into the second OT.

“We believed that we would go far, but we even beat our own expectations. We definitely have a new confidence that we didn’t have before,” said Stermel.

Stokes's sister Lizzy, who is a freshman center forward for the team, had a different perspective coming into this game and leaving it.

“People saw us as Hallahan the easy win, easy game kind of team. After defeating Little Flower 3-1 and being neck and neck with Ryan, I think people will see us as new competition.” said Stokes.

“Each and every game we played, we played with heart and later came the success. Next year, we as a team plan to continue to grow and continue to surprise each team we play.”

This year Hallahan will be graduating 5 seniors but have many promising freshmen on the bench eager to play. Next year, Stokes will be stepping out of the net as goalie to pursue those vacant senior positions.

“I’m very excited for next year’s season,” said Stokes, I know each and every one of us will pour our hearts into every practice and game because one question remains…Why not us?”

“Anyone and any team can be great by just believing in each other and striving to be the best and get better. Success will come, you just have to want to earn it,” said Stokes’s younger sister.