HAVERFORD – Terence Thompson only caught one pass. Boy, did he make the most of it.

In visiting Penn Charter’s 21-7 win Saturday afternoon over Haverford School, the junior wide receiver/defensive back caught a pass from senior quarterback Will Samuel and raced the rest of the way for an 80-yard touchdown, his first of the season.

The victory kept Penn Charter’s Inter-Academic League title pursuit alive. The Quakers had lost to Malvern in the league opener the previous week. 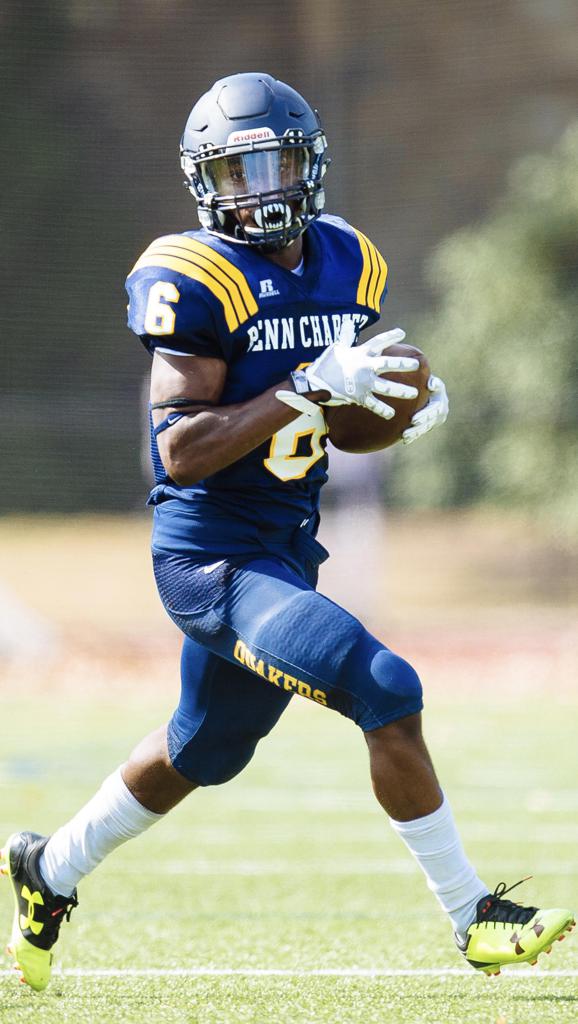 “This was a really important win for our team and for the whole program,” said Thompson. “We had just fallen short to Haverford the past two years (two overtime losses) and that was something I really carried on my shoulders. So did several other players on the team.

Penn Charter improved to 6-1 overall and 1-1 in the league, simultaneously dropping Haverford School to an uncharacteristic 1-6 and 0-2.

The Quakers’ other offense was spearheaded by Ed Saydee. Although junior Jalen Jones (6 carries for 37 yards) and Samuels (6 for 42) notched solid rushing stats and sophomore kicker Ryan Bradby belted two field goals and an extra point, Saydee was the workhorse.

“It was really physical on both sides of the ball,” said Saydee. “I give them a lot of credit. Their defensive line is really strong and big, and they slowed me up a little bit. In the second half, I had to be patient and get what I can.”

The junior running back and defensive back carried 25 times for 91 yards and caught two passes for 23 yards. His 10th touchdown of the season, however, was orchestrated on defense.

Early in the first quarter, Saydee corralled his second interception of the season and went the distance to give the Quakers a quick 7-0 lead. Bradby’s 32-yard field goal improved PC’s edge to 10-0 at halftime.

“It was really big,” said Saydee about his touchdown jaunt. “My team looks up to me as a captain, so when I’m off it feels like they’re off, so I gotta pick them up by picking myself up.”

Bradby added a 35-yarder to make it 13-0, but Haverford School countered with its only scoring halfway through the fourth quarter. Then came Thompson’s heroics and a subsequent two-point conversion pass from Samuel to junior Brendan Thomas.

Ballgame over, along with it a losing streak to Haverford that had swelled to nine straight years.

“We’re proud of Edward,” said Coyle. “We talk about not only intercepting the ball, but making plays. He doesn’t just get bumped into and fall down. He runs through a couple of would-be tacklers and puts the ball in the end zone.”

(John Knebels can be reached at jknebels@gmail.com or on Twitter @johnknebels.)