BOYS' SOCCER: A Preview to The PCL Finals as Roman and La Salle Once Again Vie For the Championship Title

Who: Roman Catholic vs. La Salle

Forecast: Between 50-55 degrees; Chance of rain

How did they get here? Roman Catholic defeated Lansdale Catholic (3-2 in penalty kicks) in the quarterfinals after being tied at 1-1 following regulation and overtime, and then edged Archbishop Wood, 1-0, in the semifinals. La Salle blanked Cardinal O’Hara, 3-0, in the quarters and, after a 2-2 tie in regulation and overtime, stopped St. Joseph’s Prep (2-0 in penalty kicks) in the semis.

Summary: The time has come. In all due respect to the rest of the Catholic League, since the beginning of league play, the odds-on favorites to reach the championship were last year’s finalists –   La Salle and Roman Catholic. The two juggernauts indeed will decide once and for all who reigns supreme.

Roman Catholic Notes: The Cahillites have won two championships (2015 and 1997) and lost in four finals . . . In the semifinals, senior Mike Galdo’s goal inside the final 20 minutes and the goaltending of sophomore Kevin Tobin put the Cahillites in the Catholic League final for the fourth straight season, the first such accomplishment since La Salle’s run from 1993 through 1996 . . . Junior Jared Dillon leads in scoring (14 goals, 8 assists), followed by senior Jared Fielding (6 g, 5 a) and junior Eric Williams (7, 2) . . . The aforementioned Tobin has shut out eight CL opponents, including six straight to start the season.

CAHILLITE CHAT:  “The most important aspect is to stay composed and to play as a team,” said junior midfielder Kieran Boyle. “I feel that La Salle is a very skilled team. Obviously they are in first place for a reason. Having that said, it will only increase our level of play as well as our intensity. On Monday, we have to leave it all on the field.

“They are defending champions and hungry to win again, but we are also hungry for our shot to reclaim the title. We are a young team and we have to play for our seniors and win this.”

“We want to win the Catholic League championship and also hand them their first loss,” said senior midfielder Jared Fielding. “The most important aspect of the game is that we have to go out there and play our game.”

“As our season approached us in mid-August, we knew that everything was going to be a battle,” said senior outside back Nate Lindner. “Making it to the championship four years in a row is a great accomplishment for the team, and we knew that we would have a huge target on our backs.

“Losing to La Salle last year, honestly, it was a terrible feeling. I think as our training and season went on, we began to trust one another much more. I consider my team to be a part of my family and I put myself on the line every game I play with them because I know they do the same.

“La Salle played a great game in the regular season, but we were able to bounce back and use that as a motivation and we’ve learned from that game. Coming into the playoffs, we wanted to take care of business and continue to push for the title. We didn’t care who we played, but it’s La Salle and we’re ready. It’s great to get another shot against them. I know that with the team we have, the effort we put in, and the trust we have, we’re capable of beating any team. If we work as a unit and continue to play the game as we know how, I truly believe that we could be holding the plaque high. But there’s still work to be done.”

“La Salle is a great team and they really showed up to play the first match we had with them,” said senior center back Mike Galdo. “Knowing that we lost to them last year in the championship and this year again in the regular season, we don’t expect anything less than really good competition when we play them Monday. It only feels right that if we want to win the Catholic League, we have to be capable of beating them. 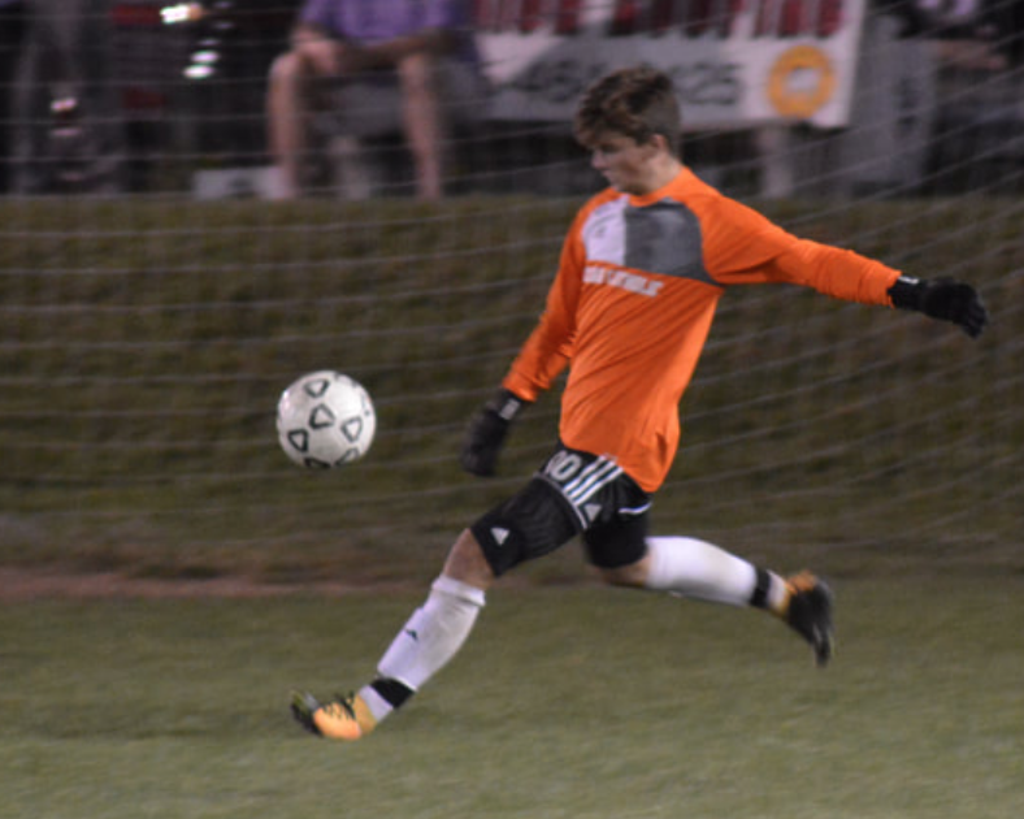 “The most important aspect of the game for us is communication. It’s important that we talk to each other all around the field so that our shape is maintained and we stay composed. Monday will be a tough battle and so we know that we can't leave the field victorious if we don't work together. These boys are family to me, and we're all very excited to be back to the championship.”

“La Salle is an outstanding opponent with a lot of talent and they are the defending champs,” said junior forward Jared Dillon. “They are going to come out strong with a lot of confidence and we need to bring the same level of intensity. We are a young, talented team with a lot of heart. We need to work hard and leave it all out on the field and, in the end, hope the scoreboard reflects our effort.”

“We certainly recognize that La Salle was undefeated in the league and last year’s championship result, and this year’s match with them is still very fresh in all of our minds,” said 11th-year coach Ray DeStephanis. “Regardless, we have thought all season long that we’d be able to compete with anyone at anytime. We’ve had moments of sheer brilliance and not so wonderful moments, too. All teams go through that.

“But hats off to those guys. They’re a great squad and we look forward to being in the big show with them again. I think there can and in the end, probably will be one definitive aspect of play that will make all the difference in the game. Honestly, one bounce, unfortunate call, or miscue can set the ball rolling favorably in one direction. With that said, leaders must lead through the highs and lows of the match. And our younger guys need to hold their own. Overall, we need to match their intensity from start to finish. If we can do all of that consistently, that will put us in the best position for a positive result.”

EXPLORER CHAT: “Ever since last season, Roman Catholic has been waiting for the opportunity to take us down,” said senior left back Joe Brigidi. “They’re a great team and we have to make sure that we come out with more intensity than they do. You can’t beat a good team in the PCL if you don’t work hard, and I believe that the winner on Monday night will be the team that works harder and has more heart to win.”

“I can’t speak for what Roman believes, but I know that our team doesn’t reminisce about last year or have any sense of entitlement based on last year’s championship game,” said junior center back Cole Hammel. “The only thing that matters is what we as a team can do this year. Roman has always been a rival of ours, and it is always a very competitive game.

“I think the most important aspects of the game will have to be composure and high energy. When we can get after teams early on and keep that intensity throughout a match, it’s going to be very hard to beat us. As we move forward in the attack, we also need to stay composed and finish our opportunities.”

“The game we played versus Roman this year and the championship last year are almost totally out of our minds,” said senior center back Bobby Bohner. “This is a completely new game and we are focused on coming out as best we can because, as we saw against St. Joe’s, prior results don't mean much this late in the season. Roman is a very solid team and we are trying to focus on them in the present and not dwell on the past.

“The most important aspect of the game will be work rate. I believe that the team that works harder will come out victorious.”

“(Having lost in the championship last year) only means they are going to come out hungrier,” said senior goalie Brett Werner. “They are coming out for blood, and we have to be prepared to keep our cool and play soccer how we do best.

“The most important aspect of the game will be defending their attack. We have to shut them down on offense and play good soccer for a full 80 minutes.”

La Salle's senior center back Bobby Bohner sprints to make a sliding kick off the goal line to save the game in semifinal match vs. St. Joe's Prep (video Kevin Murphy)

“We know that Roman is hungry to get their revenge from last year and earlier this season, so they’re going to come out firing,” said junior left midfielder Chris Metzler. “But at the end of the day, last year’s championship and the game earlier this season will mean nothing come Monday. All that matters is those 80 minutes, and who wants it more.

“The most important aspect will definitely be sticking to our game plan and listening to what we’ve been taught all year. We’ve put in the work, now it’s time to execute and play a great game.”

“As the game approaches it will be important to balance the emotional side of a match like this with the decision making and game-plan side of things. But that's true for all playoff matches.

For us, I think our energy and attention to detail will give us the best chance to win. It will be very difficult because of the coaches and players that Roman has. They have been a great program for a while now, and the run over the last five years especially has been the most consistent in the league. Matching their energy and properly executing the game plan will be key.”

Prediction: Two of the best teams in the tri-state area will undoubtedly fight through the final whistle. If this game emulates the Catholic League’s regular season and playoffs, it will be very low scoring – probably 1-1 – and be decided in overtime or by penalty kicks. If not, it is highly doubtful that the victory margin will be more than one goal, As for which team will be driving the plaque home? Ah, darn. Reached the word limit.