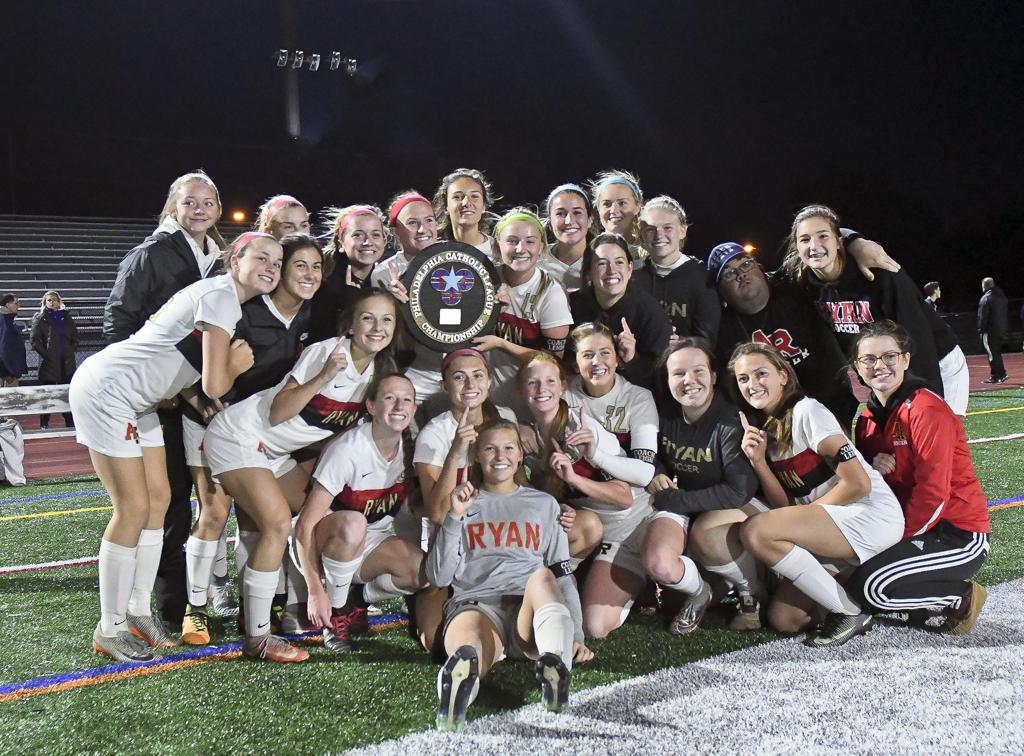 Lansdale Catholic senior Gabrielle Quattron sprawled to the turf inside the final minute, but play continued. Before being attended to by trainers and helped off the field by senior tri-captains Rose Stella and Sarah Cooney, the final whistle blew.

The Ragdolls’ 1-0 victory over the Crusaders on a windy, cold October 30 at Northeast High School was hard fought from the start, and the visual of Quattrone wrapping her arms around the neck of her teammates helping her off the field while Ryan celebrated 50 yards away, provided a stark contrast to the emotions of an event that could have gone either way.

“The first couple of minutes they were pressing hard on us,” said senior Kaitlyn Findlay, who came close to scoring on several occasions. “We all stayed positive. We were picking each other up.  We were getting our shots off.”

Scoreless at halftime, Ryan opened up its offense early in the second half, and it paid off.

The Ragdolls applied pressure deep inside LC’s territory. Findlay then passed to sophomore Gianna Monaco, and her tally ultimately served as the game winner.

“We came out the second half with a bang,” said Findlay. “We played so hard and at a high intensity.  It was one of the best games we’ve ever played.”

During the regular season, both teams finished undefeated at 10-0-1. When they faced each other September 21, the game ended in a 1-1 double overtime tie.

The championship was, then, what one would expect. Neither team dominated. Both benefited from standout performances by their goalies – Lansdale Catholic senior Lauren Crim and Archbishop Ryan senior Devon McDonald.

“I am feeling overwhelmed, said McDonald. “No one really believed in us this season. We believed in ourselves, and that’s why we won.”

Monaco was asked at what point she started to “know” that the Ragdolls were definitely going to prevail.

“The last five minutes,” said Monaco. “We were keeping them in the corner and they weren’t getting many opportunities. Our defense was doing such a great job, and I just like felt it.”

Findlay offered an assessment that probably spoke for the entire Ryan program.

“This is the best moment of my entire life,” she said. “We worked so hard for this the entire year. I am so proud to be a part of this. I’m so proud of my team.

“In the preseason, we started going to the weight room. We were practicing two-a-days. We were set on getting this plaque back. All of the hard work has paid off.”

“We knew this game would be a battle the entire way through,” said Crim. “The game was back and forth, them having a couple crucial chances in the first half and (Lansdale Catholic senior tri-captain) Kate Henesey hitting the crossbar near the end of the half. It was a very physical game, and the team really fought their way their way through the entire game.

“At the end of the game it was disappointing and frustrating. The whole team really wanted this win and dominated a lot of the game. That’s how this game works. One shot can change the whole momentum of the game.”

Two nights later, both CL finalists were successful in their respective District 12 championships games. Lansdale Catholic got two goals from senior Kate Hennessey and easily handled Class 3A Benjamin Rush, 6-0. Archbishop Ryan led throughout in its 5-1 victory over 4A Central.