PHILADELPHIA –While most athletes take the initiative to display their leadership during a game, match or meet, others go above and beyond the playing fields.

Each of these student athletes were recognized by Athlete CRUSH on behalf of their noteworthy leadership, innate kindness and willingness to make a change.

Gibson shined on the vault as a member of Temple University’s gymnastics team and advanced to the NCAA regionals in her senior season. During her time as an Owl, Gibson raised money for hurricane victims, participated in AIDS Walk Philly and volunteered for the Gift of Life Donor Program, which educates the community about organ and tissue donation and transplantation. Gibson’s participation and organization of these community service initiatives enabled her to make the shortlist for Athlete CRUSH’s Random Acts of Kindness (RAK) Award.

Kunkel discusses the importance of recognizing an athlete’s success and involvement off the playing fields:

“Giving back is so rewarding and it’s always nice to be involved in something outside of just athletics,” said Gibson, who is currently completing the Page Graduate Internship Program at NBCUniversal. “Gift of Life Donor was an amazing experience because we were able to directly impact a patients day. That was such a heartwarming and fulfilling experience.” 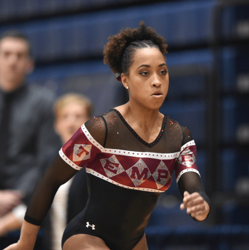 Gibson stated that the role of being a collegiate athlete offers various opportunities to help others.

“I think we have a unique platform as collegiate athletes and we have the power to reach the local community. That could be our campus or the community in which our college is located. I worked hard to get to where I am and I like to use the platform I earned in a positive way,” said Gibson.

Gregory Dix, a senior middle distance runner for La Salle University’s track and field team, agrees with Gibson that his purpose as a collegiate athlete is to offer assistance to others in any way possible.

“I believe God put me here to help others in need,” said Dix, who plans to become a high school English teacher in Philadelphia upon graduation. 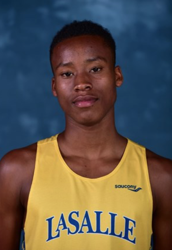 “It is important that when he places you somewhere that can be an assistance to someone else, you use it to help them up. It is important to show that compassion because not everyone will have the same opportunities you have to make a difference or change in their own lives. Whether it is mental, physical, emotional or financial, if God can use you to help somebody else, you are blessing them and yourself.”

Dix’s personal values for helping and leading others directly correlates to the Lasallian culture that students are encouraged to embody at the University.

“The Lasallian culture is based off of faith and I believe that is what it is all about. Faith is helping, leading, and overall being a good citizen. Doing something good for somebody. Loving thy neighbor and doing the best you can do to help, while also being the best version of yourself so you can succeed,” said Dix.

Current Saint Joseph’s University sophomore, Sara Hayes, got involved early on campus, stepping up both athletically and in the community. As a freshman, Hayes scored the Hawk’s first goal of the 2017 field hockey season, played in 20 games and made the SJU Athletic Director’s Honor Roll. A 2017 graduate of Cardinal O’Hara High School, Hayes explained that her scholastic and community involvement as a Lion is what encouraged her to stay involved as a Hawk.

“I loved my four years at O’Hara mainly because not only was I involved with the cross country, track, softball, and field hockey’s teams, I was also on student council and was the president of CSC (Community Service Corps). With student council and CSC, I was able to give back to my school by serving them and also serving the Delaware County area with our CSC activities,” said Hayes. “I for sure wanted to continue my love for helping others when I got to college and am grateful to have had such great experiences with service at SJU already.” 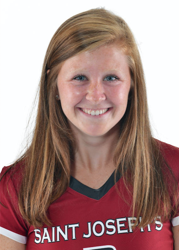 Hayes’ extensive involvement in the community enabled her to make the shortlist for the Athlete CRUSH Catalyst Award, which is given to an individual who strives to make a change not only in their community, but also the world around them. For starters, as a freshman, Hayes would allot three hours of her time every Wednesday to volunteer at different sites throughout the City of Philadelphia with MAGIS, a service group at SJU.

“My group and I did all kinds of activities like making food at a homeless shelter and serving it, cleaning out homes and helping them with yard work, and learning about several different programs like PAR Recycle Works, that helps people get back on their feet again,” said Hayes.

She also traveled to Roanoke, Virginia over spring break as part of SJU’s Appalachian Experience immersion program to learn about the culture and serve the people of the Appalachian region.

“We spent hours just talking to people who might not have anyone to talk to on a normal basis, we cleaned homes, and helped construct homes with the Habitat for Humanity organization,” said Hayes, who is majoring in food marketing. “Both programs were eye opening for me and allowed me to see the world from a new perspective.”

Gibson, Dix and Hayes were nominated as shortlist candidates among 10 other collegiate standouts from university’s across the country. Their leadership, service and kind-hearted nature is something that all athletes should strive to emulate.

Application forms to nominate a worthy candidate for the 2019 Athlete CRUSH College Impact Awards will be available to fill out in January. The Athlete CRUSH team also has plan to launch a mobile app this fall which will allow users to connect with “Crush Worthy” athletes and fans from across the globe.